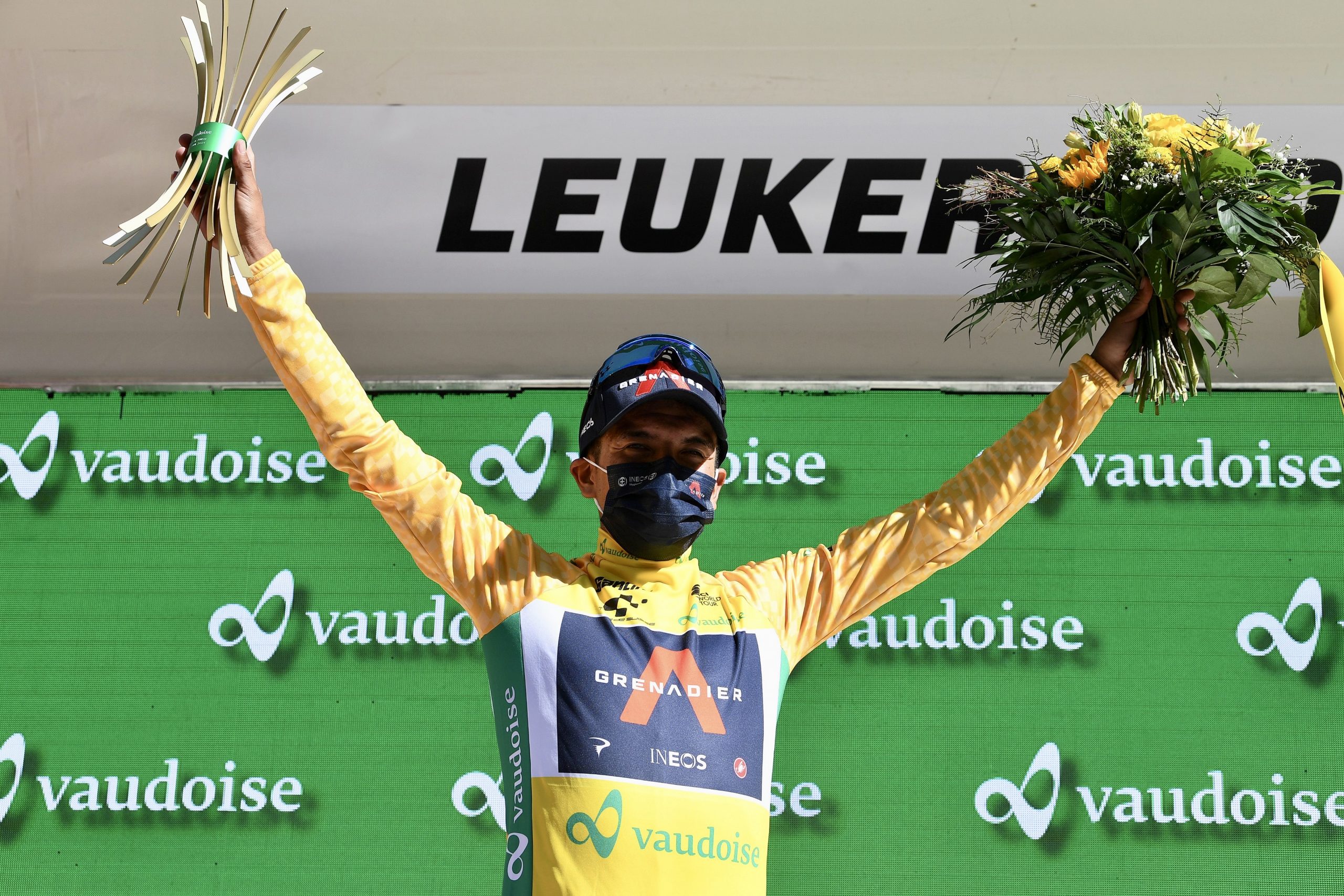 Richard Carapaz (Ineos Grenadiers) triumphed in stage 5 of the Tour de Suisse today, outsprinting Jakob Fuglsang (Astana-Premier Tech) atop the summit finish at Leukerbad, claiming not only the stage honors, but also moving up into the overall race lead.

Fuglsang attacked along the penultimate climb of the day with 18 kilometers remaining, only to be joined by Carapaz 3 kilometers later.

From there, the duo maintained a 40-second gap over the chase into the final kilometer.

Carapaz led out the sprint before Fuglsang surged during the final 200 meter uphill finish.

The Danish rider looked poised for victory until Carapaz accelerated during the last 25 meters to snatch the victory, resulting in a 26-second margin over Fuglsang to takeover the race lead.

“I’m really happy. It’s something we’ve been working on all week,” Carapaz said after the stage. “We knew it was a special day. We wanted to think about the general classification of course and the possibility of winning a stage was there. I did both so I’m happy.

“We’re here. We came thinking about preparing for the tour. Of course, we wanted to try and win this. We know the main objective is the Tour but if we can win this it’s good.”

Imhoff was the first rider to get jettisoned from the group along the second climb of the day. Van der Poel later dropped back into the peloton as well, while Pernsteiner and Samitier ended up getting caught with 28 kilometers remaining.

Antwan Tolhoek (Jumbo-Visma) was the next to attack, but the Dutch rider was later caught by Esteban Chaves (BikeExchange).

Tolhoek was eventually reined in with 19 kilometers to go. But, Chaves remained out front, opening up a gap of 47-seconds.

With 18 kilometers to go, Fuglsang attacked from out of the chase group, while Chaves went over the top of the climb with a 20-second lead over the chase.

From there, Tolhoek dragged his leader Sam Oomen (Jumbo-Visma) back to the chasing group along with Dunbar.

On the descent Chaves mis-judged the route, bringing him to a stop and cutting a huge amount of time off of his lead over Fuglsang and the chasing group with 10 kilometers to go. So, Chaves sat up and waited for Fuglsang to work together but the gap to the chase was greatly reduced.

Fuglsang powered away from Chaves with 5.5 kilometers left, pulling out a gap of 38-seconds.

Woods was the first to kick but he was countered by a massive acceleration from Carapaz. The Ecuadorian flew by Chaves in fierce pursuit of Fuglsang with 4 kilometers to go.

Nobody could follow Carapaz as Woods kept trying to get away but he would kick, look around and sit up again. Alaphilippe, Lucas Hamilton (BikeExchange) and Schachmann all got dropped by a big push by Woods. Alaphilippe found some energy with Schachmann to get back onto the main chase group with Chaves getting caught.

Carapaz caught Fuglsang and immediately attacked, but his Danish rival was able to follow with 2.5 kilometers to go, this left Carapaz to do all the pacing.

Hamilton, Woods and Uran attacked the chase group with Schachmann bridging across. Pozzovivo, Alaphilippe and Chaves got back on and they all sat up again as the leaders went under the Flamme Rouge with a 28-second gap.

Fuglsang kicked with 200 meters to go but Carapaz followed the wheel well before kicking around in the final 25 meters to take the stage and the overall lead.