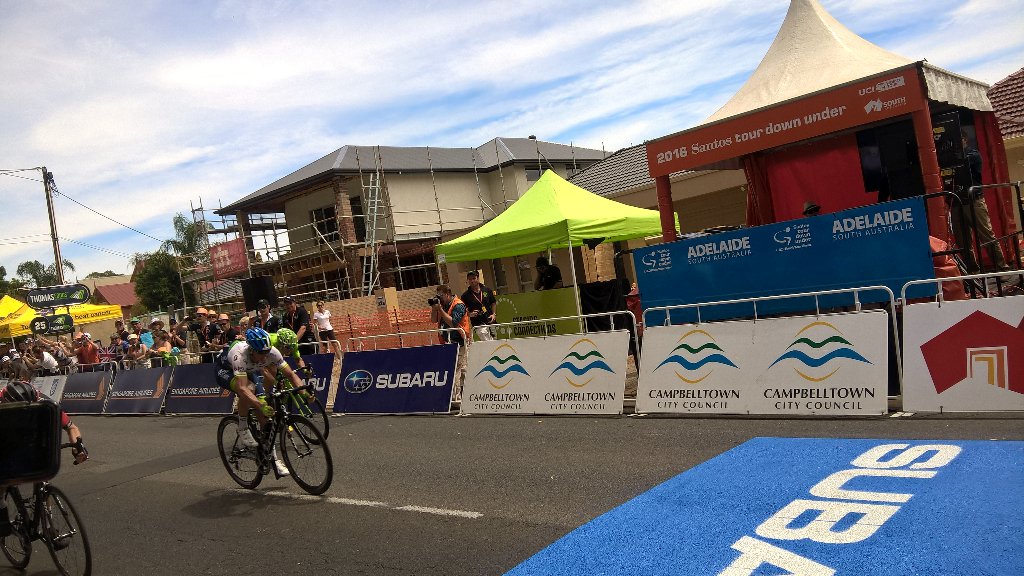 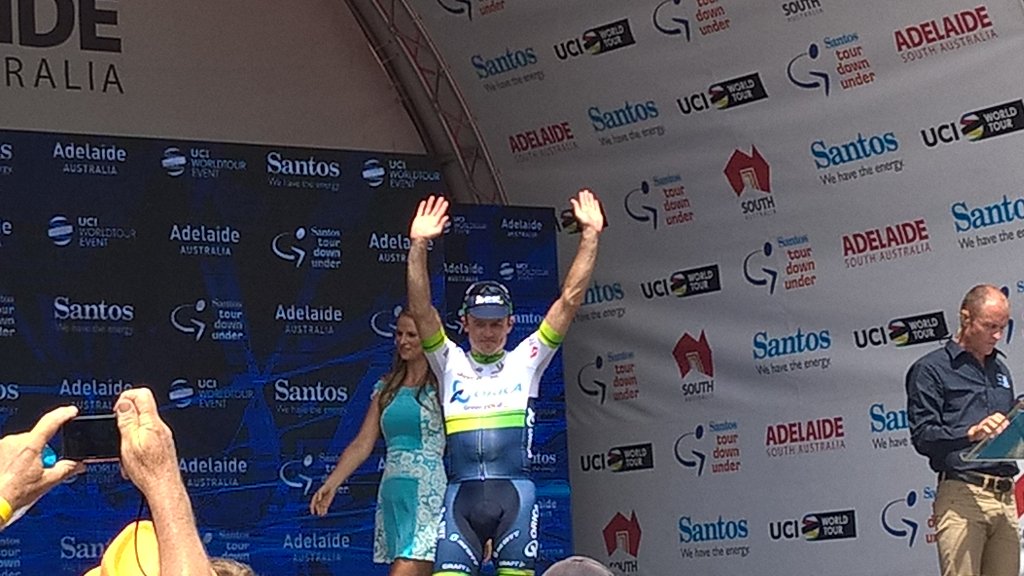 Simon Gerrans has snatched the race lead from fellow Australian Jay McCarthy with a scorching sprint into Campbelltown to win the Thomas Foods Stage 3 of the Santos Tour Down Under.

Gerrans, a three time winner of the race, led a select group of ten riders across the finish line, half a wheel in front of defending champion Rohan Dennis (BMC Racing) with Canadian Michael Woods (Cannondale) third.

The beachside suburb of Glenelg hosted the start of today’s Thomas Foods Stage 3 that took the race through the Fleurieu Peninsula and the Adelaide Hills with the highlight of the action coming on the infamous Corkscrew Road climb that led to a super fast descending final 5.7 kilometers of the stage.

“It was super tough going up to Corkscrew,” said Gerrans after his win.”There are obviously some good climbers in the race and I had to dig deep to stay up there.

“I just came back over the top to the guys in front of me to catch the escapees right at the beginning of the descent,” said Gerrans who yesterday was one of the riders who crashed inside a kilometer from the line after riding a near perfect stage to that point.

Today his Orica GreenEdge team mates again did their job to protect him and set him up for the climb.

“I was in a really good position coming into Corkscrew and thanks to them I got this great result,” he said. “I’m just happy to get the win at the end.”

Overnight leader, McCarthy (Tinkoff), finished fourth, just outside the placings and the time bonuses, which means he now sits three seconds behind Gerrans while Dennis is ranked third at five seconds.

The flag to start the race proper was still moving when Belgian Laurens De Vreese (Astana) launched an attack from the bunch setting himself up for a long, hot, lonely day at the front of the race that today attracted 115 thousand spectators.

He set up a handy lead and was first across the line at the iiNet intermediate sprint at McLaren Flat, 34 kilometers into the stage. The main field upped the pace as headed to the sprint with the favourites keen to grab one of the minor placings and a time bonus.

Movistar’s Juan Lobato del Valle was too quick for McCarthy who claimed a one second bonus for his third place on the line. Gerrans also tried his luck.

“We tried to go for the first intermediate sprint but I didn’t have the legs,” said Gerrans. “I was a bit stiff from the crash yesterday so I wasn’t able to score any points or any seconds in the first sprint.”

De Vreese’s lead, that had come down at the sprint, stretched again after the line and at one stage topped four minutes.

That meant he also collected the second iiNet sprint of the day at Oakbank at 95km while back in the bunch Tinkoff was setting up McCarthy for another burst. This time however, Orica GreenEdge was in the mix to try and stymie McCarthy’s bid for another time bonus.

Ewan outsprinted McCarthy who had to settle for another one second bonus. Gerrans didn’t contest the second intermediate iiNet sprint choosing to rest his legs for the final assault.

As the race headed into the final 20 kilometers De Vreese’s day in the spotlight was over and he was unceremoniously caught, passed and dropped. He did however earn the Alpecin Most Competitive Rider award for his efforts.

“It’s better to go on the attack than do nothing,” said De Vreese. “I tried to have somebody coming up the road with me but someone has to be first to attack.

“It was me and I was alone so it was a long day for me but it became a good training and I’m very happy to get the trophy for the most competitive rider.”

The pace was relentless as the teams of the main contenders worked to position their men at the front for the category one Subaru King of the Mountain climb up Corkscrew Road.

A small group of riders crashed before the climb causing a split in the peloton and leaving anyone not in the front group with no chance of regaining the leaders.

On the climb Colombian Sergio Henao (Team SKY) led Woods over the top after the pair broke clear. Italian Domenico Pozzovivo (AG2R La Mondiale) was next under the banner with Richie Porte (BMC Racing) and Simon Gerrans the next to crest the hill.

“You’re always thinking about the victory,” said Henao. “If the climb was steeper or longer, I am sure I could have gotten away. We could see the group coming back, so it was important to be there with the leaders.

“I had a good winter training in Colombia, and came here with good condition, he said. “The team is working well, and we will see at Willunga Hill (Saturday). I will try to take the victory there.”

A group of ten riders formed at the front and flew down the descent before making the sharp right hand turn onto the finishing straight to battle for stage honors.

McCarthy was disappointed to relinquish his lead but remains a threat for overall honors.

“Definitely it would have been nice to keep the jersey but in the long picture, I know how much the boys had to work hard,” said McCarthy. “They did a great job today.

“I’m gonna keep going for it as hard as I can,” said McCarthy who still leads the Europcar Young Rider classification. “It’s all new to me to be going for the overall classification at this level but I’ve done it before as an under 23 and at the Tour of Turkey so I know how to handle the pressure.

McCarthy says being out of the lead will ease the pressure on his Tinkoff team mates who will not have to defend the jersey in tomorrow’s Bupa Stage 4 where crosswinds are expected to create challenging conditions.

Third place Woods was thrilled to be in thick of the action today.

“I spoke with my sport director before coming here, and he said do not put limits on yourself,” said Woods. “I was feeling good on the climb, and had the self-confidence to keep going.

“I’ve always watched the Tour Down Under on TV, and heard Phil Liggett calling the races, and now I am doing it myself. It’s like a dream come true.” 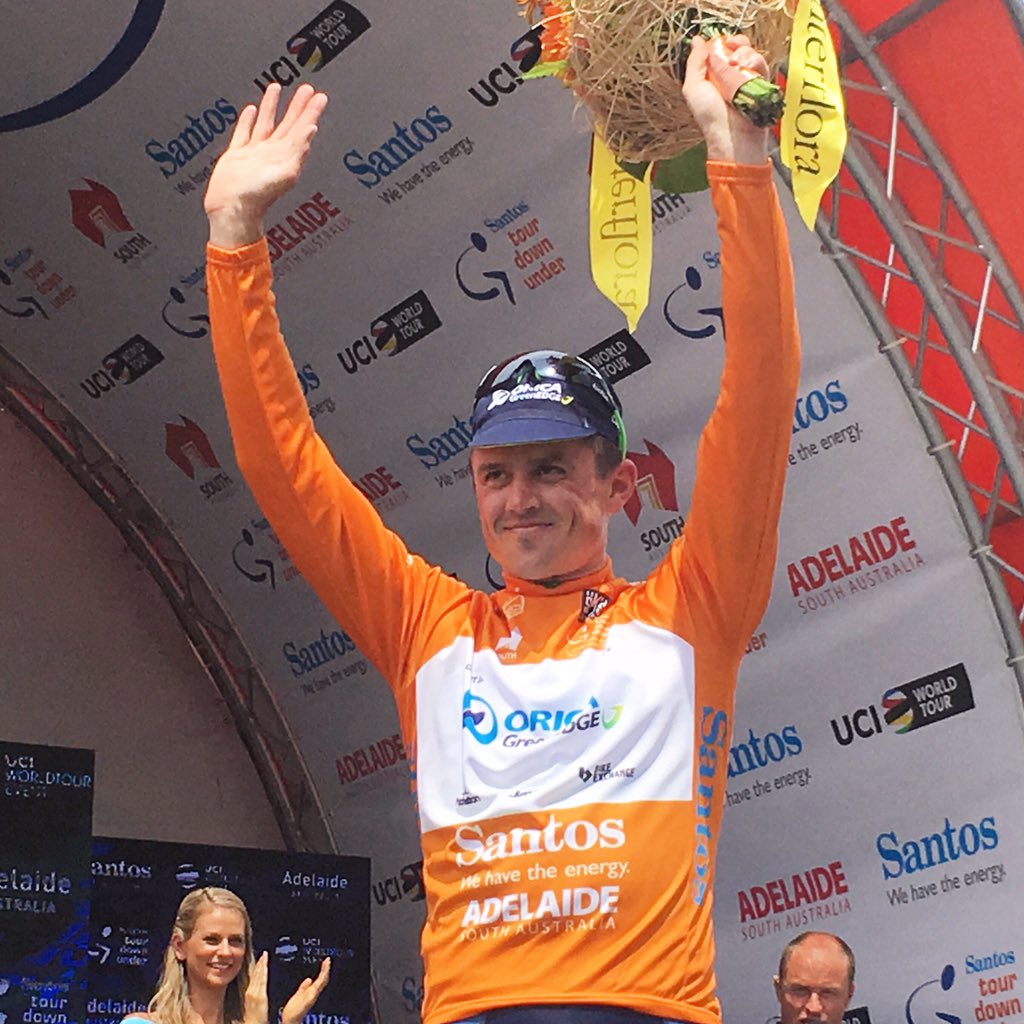