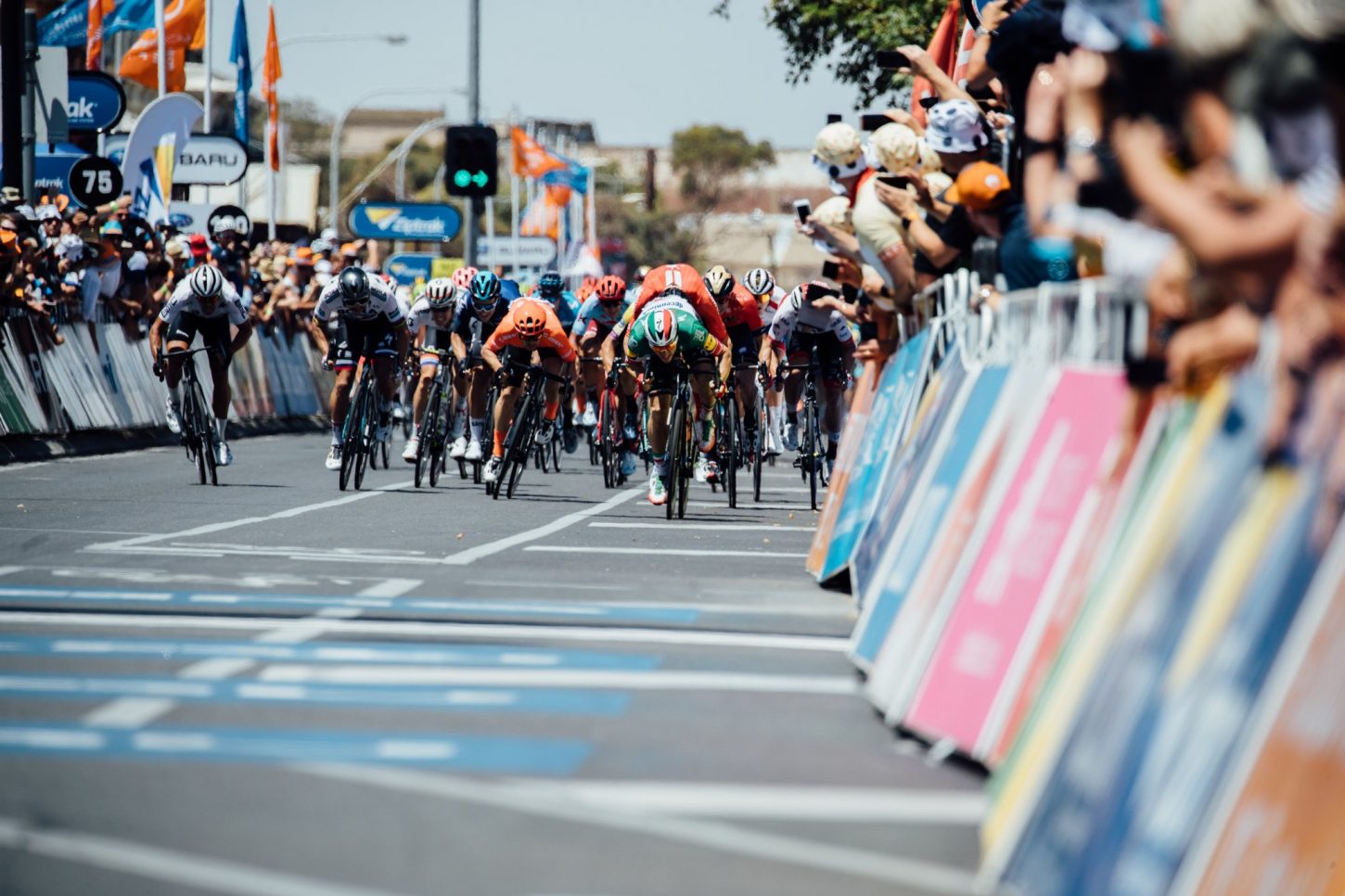 A headwind sprint made for an intriguing start to this year’s Tour Down Under, with Deceuninck – Quick-Step’s Elia Viviani taking the line for Ziptrak Stage 1 and winning the honor of holding the Santos Ochre Leader’s jersey overnight.

It’s the perfect start to the Italian National Champion’s season, having arrived on the first team flight into Adelaide and preparing with his Belgian with recons of the Adelaide hills from their first opportunity.

The 29-year-old comfortably engaged the track power he honed at the Adelaide SuperDrome during the week to launch from the fourth row in the pack to reel in Sunweb’s man mountain Max Walscheid to comfortably seize the win.

Walscheid – the 25-year-old German who has flown under the radar thanks to other high profile sprinters in Adelaide –  finished second ahead of another Italian in the CCC Team, rider Jakub Mareczko.

Phil Bauhaus (Bahrain Merida) was fourth while Ryan Gibbons (Dimension Data) was fifth across the line.

Slovak triple world champion Peter Sagan (BORA-hansgrohe) was eighth, while Down Under Classic winner Caleb Ewan was down the order in 22nd across.

A long runway to the finish

Despite a south-westerly wind forecast for Adelaide’s high-temperature day, the peloton was forced to battle a steady headwind coming into Port Adelaide. Powering to the line was no problem for the world’s fastest sprinters, but getting there was a battle of tactics.

The peloton eased its pace with 20km to go as it made its way through the northern suburbs of Adelaide in anticipation of its western deviation to the Port.

The pace kicked as the peloton closed within 10 kilometres of the finish through Mawson Lakes onto the long, unprotected Port River Expressway. Spreading across the full three width of the carriageway, teams began moving into formation for the finish.

But with two final 90-degree turns within the final kilometre (a long drive to the finish), the bunch scrambled for organisation as the finish closed in.

Jumbo Visma was in train early, but it was Walscheid who broke best heading to the line before Viviani swooped – not unlike his win in Victor Harbor last year – to claim the opening stage.

He will now wear the Santos Ochre jersey when the race re-starts in Norwood on Wednesday for Novatech Stage 2, while his Ziptrak® sprinter’s jersey will fall to the shoulders of Walscheid as next best-placed.

A familiar sight to start

The Santos Tour Down Under is one of the few UCI WorldTour races where the home country’s national representative team is given a start. Because of that, UniSA-Australia’s riders – all of whom are looking to impress for pro contracts – are usually featured in the early breakaway.

They eked out a maximum four-minute lead, which the peloton whittled down to just over two by the time they reached the foot of the Subaru King of the Mountain climb at Snake Gully.

The 9% gradient was tough in plus-45-degree conditions, and so when Zakharov kicked with 100m to go, the response would be important to prevent him from claiming the Subaru polka dot jersey in Port Adelaide. Only one rider – Lea – answered the call, and successfully took the inside line up the final bend to the Subaru checkpoint to claim maximum points and the honour of the polkadots on Stage 2.

Zakharov bailed out of the breakaway after failing to claim the Subaru KOM checkpoint, and left it to the Trans-Tasman alliance of Aussies Lea and Storer, and Kiwi Bevin, to chalk up the Ziptrak® sprints in Inglewood.

Bevin and Storer split the winnings between them on the two sprint marks, before pushing out along the crest of Hermitage with Lea in tow.

The breakaway didn’t last much longer than its foray through the technical descent back to Snake Gully – caught just over 40km from the finish.