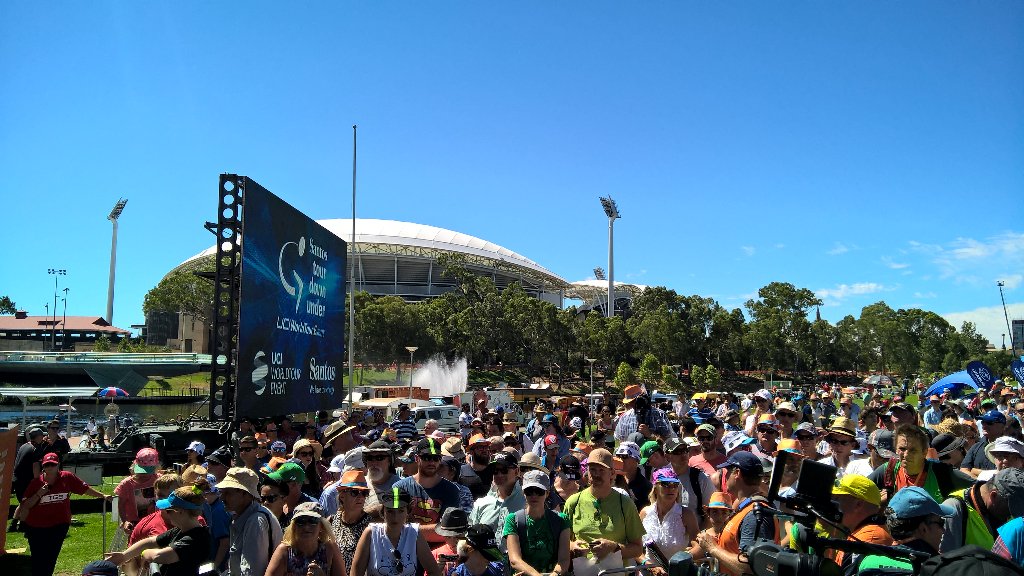 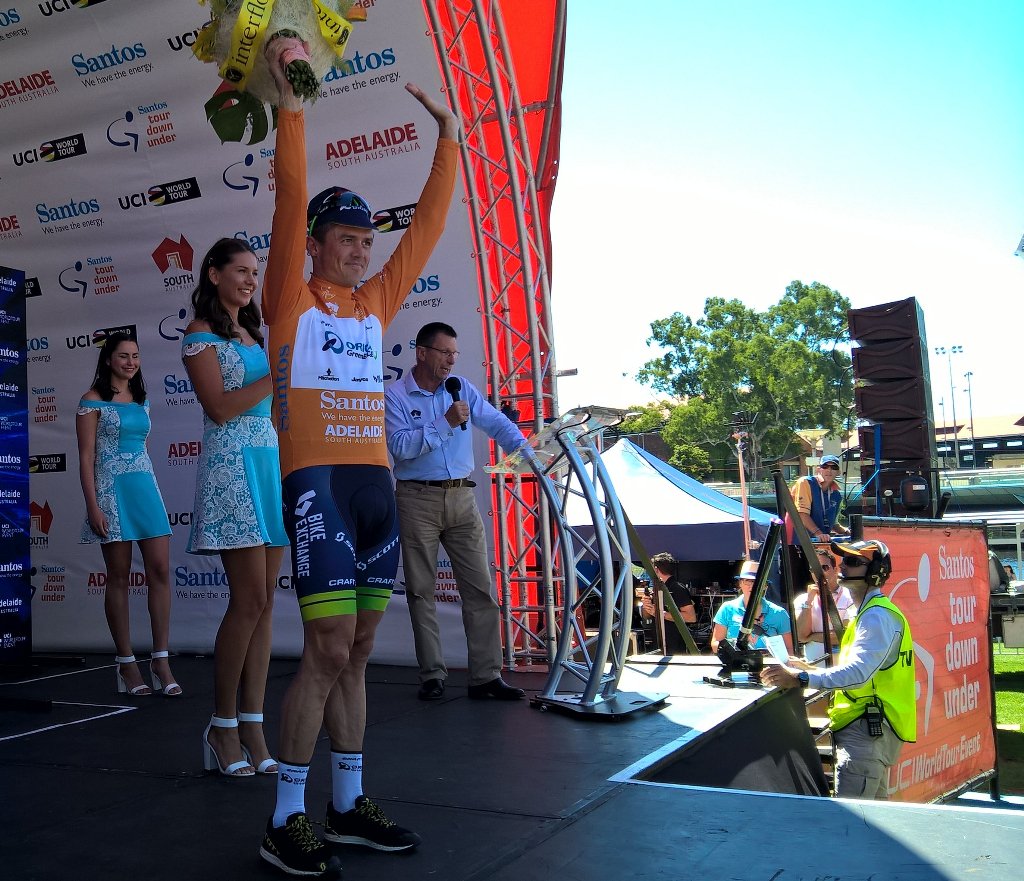 Australian Simon Gerrans has been crowned Santos Tour Down Under champion for a record fourth time with Orica GreenEdge celebrating double success after Caleb Ewan sprinted home to win the final stage.

“It’s certainly a dream result and we couldn’t have asked for more,” said Gerrans, 35, who also won two individual stages and the iiNet sprint title.

“We are so lucky to have this race here in Australia,” said Gerrans who claimed his victory in front of 97 thousand fans. “It’s fantastic to race the Santos Tour Down Under with Orica-Greenedge, an Aussie team winning a WorldTour race in Australia, it’s just awesome.

“The boys did a sensational job today, they kept me at the front, out of trouble and delivered Caleb (Ewan) as close to the line as possible,” said Gerrans. “What a fantastic week it’s been for us.”

“Obviously it wasn’t just a great week for me, the team showed that this week they are by far the strongest,” said Ewan.

“It was always going to be hard to come to this race and chase both stages (wins) and overall victory,” said Ewan who, although he also won the opening stage, knew the team’s priority was for Gerrans to win the title. “I’m so happy that we came away with four stages and the overall.

“I actually got caught behind on the way down to the finish line (today) and I was way back in the bunch and I had go back to the front,” he explained. “Luckily my team-mates brought me up to where I wanted to be for sprinting and it all went well.”

Orica GreenEdge team director, Matt White, had nothing but praise for his team.

“It’s been a huge week for our team, to win the overall and book-end with Caleb, this was confirmation for Caleb, he clearly was the fastest rider here all week,” said White. “And for Gerro (Gerrans) to come back, everyone saw how hard he worked. This will set the tone for rest of the year.”

The Subaru King of the Mountain classification was won by Henao who amassed 38 points, ten ahead of Porte with Michael Woods (Cannondale) third on 20 points.

Tinkoff’s Jay McCarthy was fourth overall which gave him the Europcar Young Rider title as the top ranked rider under the age of 25.

“I’m definitely very happy with how it’s gone this week,” said McCarthy who wore the Santos Ochre Leader’s jersey for a day after winning the second stage. “To finish fourth brings me the confidence I needed and I hope to deliver some more good results, I want to deliver more for the team.

“I love the crowd and the atmosphere here,” said the young Australian who raced on front of a total of 731 thousand fans this week. “I had a lot of my family (from Queensland) here to watch me. Every time I’ve done the Tour Down Under, they’ve come to Adelaide as well.

“To be up on the podium for them and my team has been super exciting,” he said.

Cannondale Pro Cycling, who finished with two riders in the top ten, goes home with the Wilson Parking Winning Team trophy which they won by a narrow nine second margin over Movistar. Etixx Quickstep was third ranked at 1min 12sec.

“Winning the teams classification here is a really good start for Cannondale,” said Simon Clarke who joined the team this year. ”We are on a mission this year to take the team to another level and unity is the key to getting results.

“This classification shows our unity,” he said. “The focus this week was to ride together… and to get to the podium with the whole team.”

Today’s Be Safe Be Seen MAC Stage 6 was no place for the faint hearted with an average speed of 47 kilometers an hour for the 90 kilometer, 20 lap, race on the Adelaide street circuit.

If anyone had expected an easy day in the saddle they were in for a shock as the pace over the first 20 kilometers was relentless.

But the quintet included two riders who posed a threat in George Bennett (Lotto NL Jumbo) and Carlos Verona (Etixx QuickStep), both sitting less than 1min20sec off the race lead.

That forced Orica GreenEdge to the front immediately in pursuit of the escapees but it took them close to 20 kilometres to get the job done.

With both sitting more than 20 minutes out of contention they obviously hoped that would be allowed to sneak away but they struggled to increase their lead above 30 seconds.

Tjallingi was first under the arch at the end of lap eight (36km) for the first of two iiNet intermediate sprints. De Gendt was second and twenty seconds later Orica GreenEdge’s Daryl Impey stymied Tinkoff’s efforts to set Jay McCarthy up for the minor points.

Two Subaru King of the Mountain climbs featured in today’s stage but the overnight leader, Henao had no cause for concern as he started the day with an unassailable lead.

The first time up Montefiore Hill, De Gendt crossed the line ahead of Tjallingii, as the pair churned through the kilometres setting an average pace of close to 47 kilometers an hour. Colombian Jarlinson Pantano (IAM Cycling) was third.

The second iiNet sprint was contested at the end of lap twelve (54 km) and De Gendt rode through with Tjallingii on his wheel. Not far behind Frenchman Johan Le Bon (FDJ) was alone in third place.

The peloton was matching the pace of the leaders and holding the break to 30 seconds, nowhere near enough to secure a shot at the stage win.

As the race headed into the final 30 kilometres the margin to the lead pair was down to 18 seconds.

The second Subaru King of the Mountain climb was won by Tjallingii ahead of De Gendt with the bunch led over the line 23 seconds late by Pantano.

Astana launched it’s own pursuit with Laurens De Vreese and Lieuwe Westra which triggered a surge of pace from 38 year old Tjallingii. De Gendt threw in the towel and dropped back to the peloton.

Four laps to go (18km) Tjallingii was joined by Westra while De Vreese returned to the bunch but the peloton wanted a sprint finish and they would not be denied, snaring the breakaway ahead of the final, frenetic lap.

Tjallingii might not have stayed clear to contest the stage but his efforts in front of the race earned him the Alpecin Most Competitive rider of the day award.

“You never know what is going to happen at the end so you can only try to anticipate a bunch sprint,” he said. “I had in mind that the bunch could break up in the last lap and let me alone away for the stage victory and I wanted to see if there was any possibility to win.

“It’s been a great week of racing,” said Tjallingii. “It’s great to begin the season here with a lot of spectators around, South Australians are very supportive of the cyclists.” 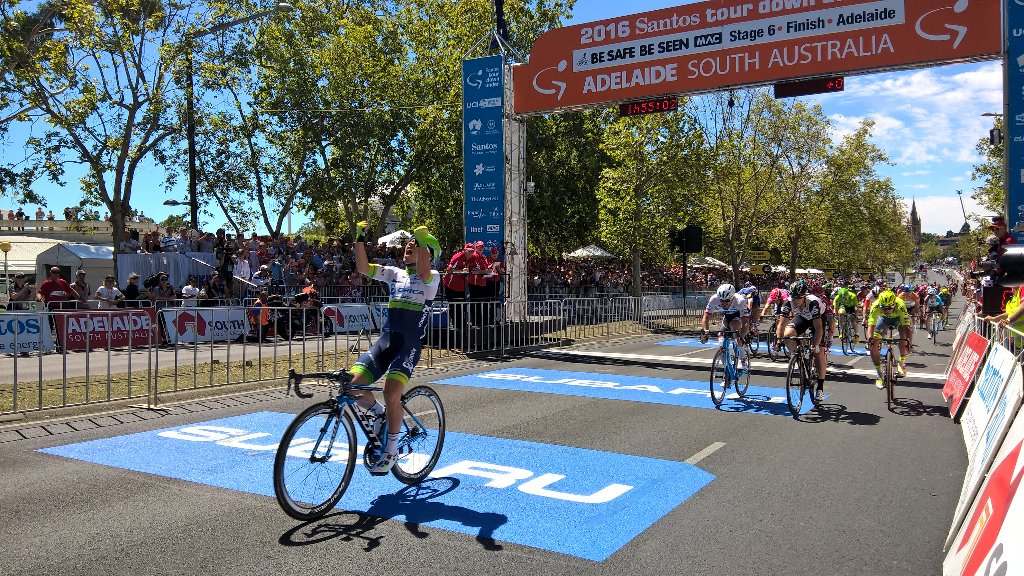