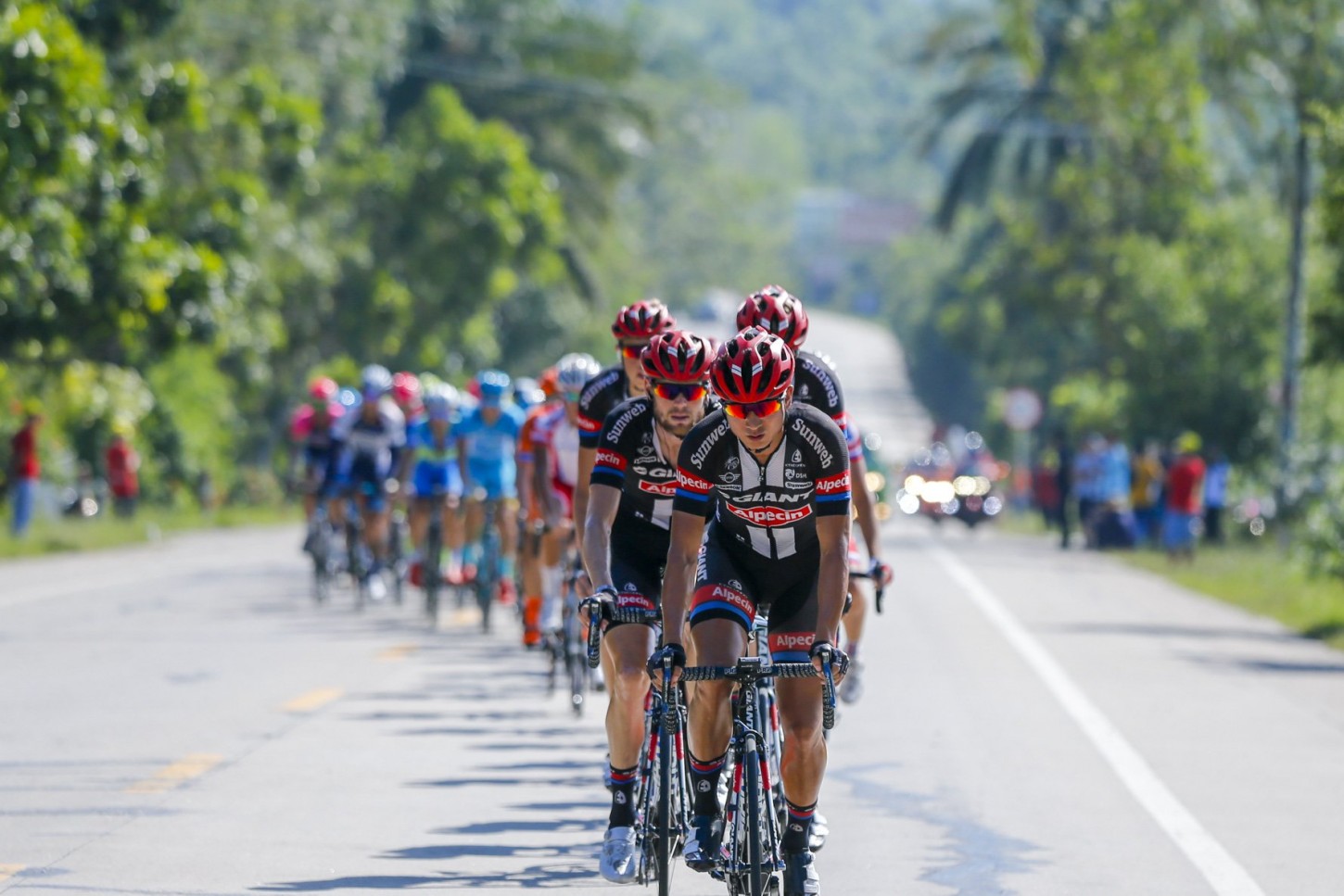 Max Walscheid (Giant-Alpecin) needed every last centimetre of the 127.4km road race from Wuzhishan to Sanya to clip Australian sprinter Brenton Jones (Drapac) at the finish of stage 7 of the Tour of Hainan in Sanya, China, on Friday, October 28.

It was the fourth stage win of the week – and fledgling pro career – for the 23-year-old German, who once again proved he has fully recovered from an early-season training crash involving six Giant-Alpecin riders in Spain.

“Brenton had a good sprint,” said Walscheid. “I was early at the front and I had to accelerate a few times and then go back, because it was still a long home straight and there was a headwind. I didn’t want to make a mistake and go too early.

“In the end, Brenton was coming with speed and I had to fight really hard to get past him,” he continued. “My team worked incredibly hard all stage long and I wanted to win really badly.

“After tomorrow’s climbs, I will try to go for another victory on the final stage.”

While Walscheid was all smiles after the race, journalists caught up with a visibly disappointed Jones following the podium ceremony.

“I’m pissed off,” admitted Jones. “The boys did a really good job; I felt good today and knew I was going to have a good ride. I’m happy I’m on the podium and it’s a good start to finishing off the tour well, but I sprint for wins, not second-places.”

With Brad Evans (NZL) withdrawing overnight due to illness and Bernard Sulzberger (AUS) physically spent after a day in the break, Jones found himself in the final down two riders. But the Aussie offered no excuses.

“Bernie was in the break, so we didn’t have him in the leadout at all and we didn’t have Brad, who’s been our second strongest guy in the train and influential this week in the leadout,” explained Jones, who won the last stage in Hainan last year. “So we missed Brad … we missed Bernie, but I’m so happy the rest of us did a good job and I fought hard.

“Max has been on form all week,” he added. “I had a good sprint and thought I had it, but he got me right on the line.”

Jones is one of many team riders currently looking for a ride in 2017 after Drapac decided to close it’s doors on its Professional Continental squad in order to pour its financial resources into an partnership with Cannondale in the WorldTour. The 24-year-old is hoping a strong showing in Hainan, along with a palmarés highlighted this season with two stage wins and a points classification at Tour de Korea (2.1), may be just enough to turn heads.

“It would be disappointing to go down to Continental next year,” said Jones. “I’d love to stay on a pro team, so I hope there are a few teams out there that can see a bit of potential in what I’ve got. I have a lot of attributes to offer a team and I think a strong result on Sunday will help my cause.”

Prior to the start of the stage, Frenchman Thomas Vaubourzeix (Delko Marseille Provence-KTM) told media that “today may be the day the break sticks” and his words almost proved prophetic as the 27-year-old former Lupus Racing Team rider, who has animated the tour all week, was once again out in front for the a majority of the day.

With less than 7km to go, Vaubourzeix attacked his own five-man break, which also consisted of Sulzberger, Taras Voropayev (Vino 4-ever SKO), Mykhaylo Kononenko (Kolss-BDC) and the day’s most aggressive rider Adrian Kurek (CCC Sprandi Polkowice).

The 2014 Tour of Qinghai Lake (2.HC) stage winner and overall race runner-up, opened up a 30-second gap on the break with the peloton barrelling down less than half a minute behind. However, the surging field engulfed Vaubourzeix and the others with the finish nearly in sight.

For 24-year-old race leader Alexey Lutsenko (Astana), who leads stage 6 winner Matej Mohoric (SLO) and his Lampre-Merida teammate Przemyslaw Niemiec (POL) by 3 and 7 seconds respectively, only two stages stand between him and claiming the overall win. However, tomorrow’s stage 8 features the final day of climbing and perhaps the last chance for his nearest rivals to contend for the yellow jersey.

“I gave up the KOM jersey today,” said Lutsenko (KAZ), who relinquished the polka-dot mountains jersey to new KOM leader Guangtong Ma (Wisdom-Hengxiang) of China. “The yellow jersey is most important for me and the team at the moment.