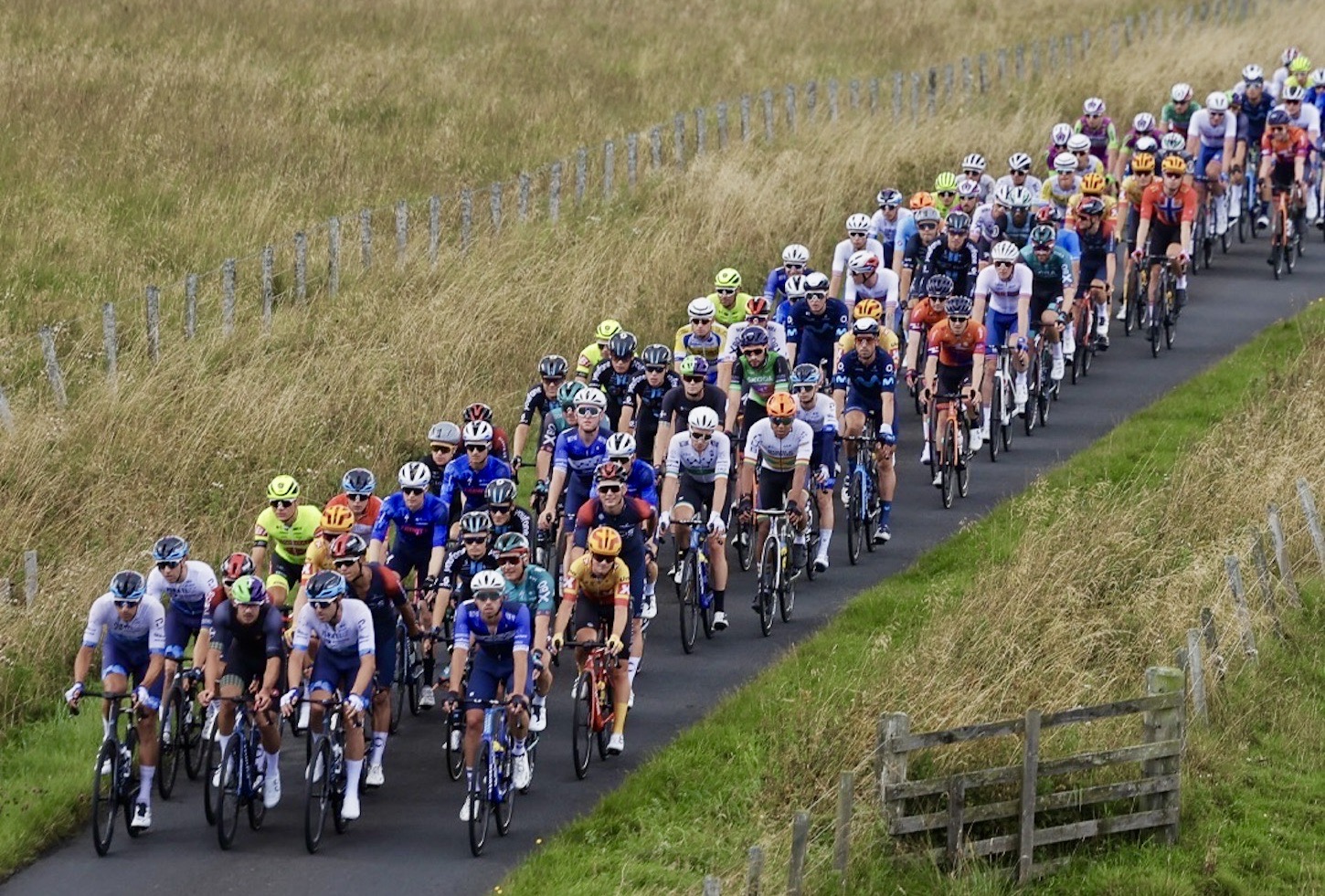 Cees Bol claimed his first victory since March 2021 in dramatic style as he dramatically pipped Briton Jake Stewart to win stage two of the Tour of Britain in Duns yesterday.

The Team DSM rider timed both his sprint and bike throw to the line to perfection to claim his first victory in the race, denying Stewart the same achievement in the process.

Corbin Strong (Israel – Premier Tech) placed third to extend his lead at the top of the standings and claim the leader’s jersey for another day.

The Kiwi rider now leads by eight seconds from Stewart, with Omar Fraile (INEOS Grenadiers) on the same time, and also holds the Dodl by points jersey with an extended eight-point advantage.

“It was obviously a nice day for me”, said Bol. “But it was a pretty hard day. It was not an easy stage and when the final kicked off the first two climbs were on the tailwind sectors and that was actually really hard. I was on the limit of dropping and giving up. I kept fighting and then on the headwind it was a bit easier to stay in the bunch, and then over the top of the last climb my team-mates found me and put me in the best position. From there it was just the last 200 meters all out, fighting through the cramps and throwing the bike.”

Race leader Strong said: “I’m confident as I am sprinting well at the moment. I was there or thereabouts but there was some fast guys still there at the finish though, so third was the best I could do today. I’m really happy again, and hopefully it continues.

“It’s a really nice and pretty humbling experience actually. Having some guys that I’ve grown up watching like Michal Kwiatkowski and Riche Porte congratulate me is a really cool feeling as a young neo-pro. It was a nice day for me and hopefully it continues.

The race had sparked into action as the peloton took on a trio of late ŠKODA King of the Mountains climbs in the Lammermuir Hills above Duns, with the final riders from the day’s breakaway – including Sportsbreaks.com sprints leader Matt Teggart (Wiv SunGod) – caught just after the summit of Wanside Rigg.

INEOS Grenadiers then controlled the race on the narrow roads across the open moorland onto the second climb, with Jacob Scott (Wiv SunGod) jumping away near the top of the second climb of Mainslaughter Law to secure enough points to move into the ŠKODA King of the Mountains jersey that he has won in the past two editions of the AJ Bell Tour of Britain.

The Belgian looked to have done enough on the fast descent into Duns but was caught first by Magnus Sheffield (INEOS Grenadiers) and then, as the pair hesitated, a Team DSM-led peloton.

DSM put Bol into a good position coming into Duns but as the road gradually rose past the Jim Clark Museum it looked like an inspired late charge from the Great Britain team was going to deliver Stewart to victory, only for the Coventry rider to be denied by the narrowest of margins.

For Stewart the result marks a best performance in his home Tour, coming a day after finishing just outside the top 10 at Glenshsee Ski Centre on Sunday.

“We can be happy with the work we did, obviously it is disappointing to come away with second but the lads did a really good job and we will take it from here,” said Stewart. “We had a good day yesterday and a really good day today, and there are still plenty more opportunities to come

“We had a plan going into the day with the boys and we executed it really well. We knew where we had to be over those last few climbs. We had Sam [Watson] there to lead us out, we knew it was an uphill sprint with a slight headwind and really, I wanted to come from behind but we found ourselves on the front. I was pretty confident in my long sprint, I’ve always been pretty good over a long distance, but in the end the finish was about five metres too far!”

Wiv SunGod hold both the Sportsbreaks.com sprints and ŠKODA King of the Mountains jerseys with Teggart and Scott respectively, while fellow British team Saint Piran made a first visit to the Tour of Britain podium as Adam Lewis collected the Adyen combativity award.