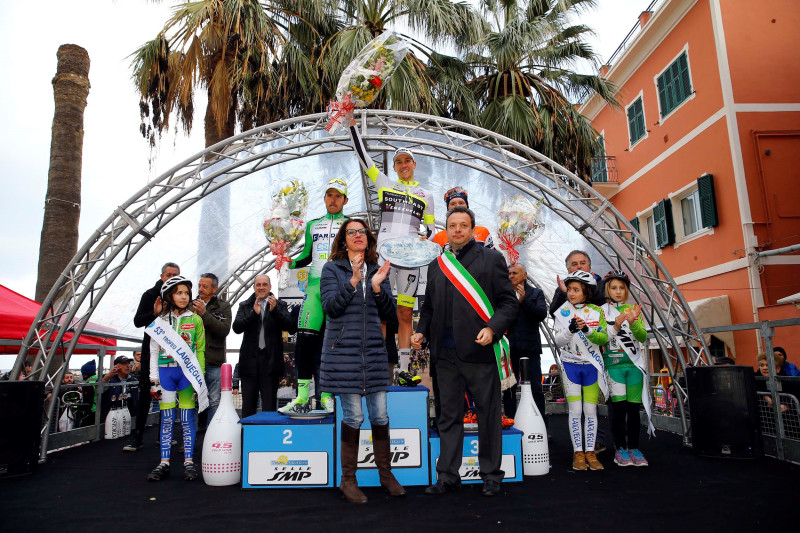 Andrea Fedi (Southeast-Venezuela) emerged victorious in today’s Trofeo Laigueglia, after riding clear of the peloton during the final kilometers to commence a solo victory.

David Ballerini was the first rider to try his luck off the front, but the high pace of the peloton kept the Italian rider from getting far.

From there, the trio went on to establish a massive advantage of more than 7 minutes over the peloton.

However, a determined chase effort under the auspices of Lampre-Merida, FDJ and Andiron Giocattoli, eventually brought the breakaway group’s advantage to just over a minute during the halfway point in today’s race.

Yamamoto was the first of the breakaway group to be reclaimed by the peloton during the first of three final finishing laps. This signaled the beginning of the end for the rest of escapees, as they were all eventually reeled in during the closing 20 kilometers.

From there, a flurry of attacks occurred during the closing 5 kilometers, particularly along the final climb of the Capo Mele.

It was then that Fedi, along with Arthur Vichot (FDJ), Damiano Cunego (Nippo-Vini Fantini), Diego Ulissi (Lampre-Merida), Matteo Busato (Southeast-Venuzuela) and Frnacesco Gavazzi (Androni Giocattoli-Sidermec), managed to ride clear of the peloton.

Despite a number of attacks by Ulissi, Fedi was able to jettison his breakaway companions, and create a slight gap for himself, that would hold until the finish.