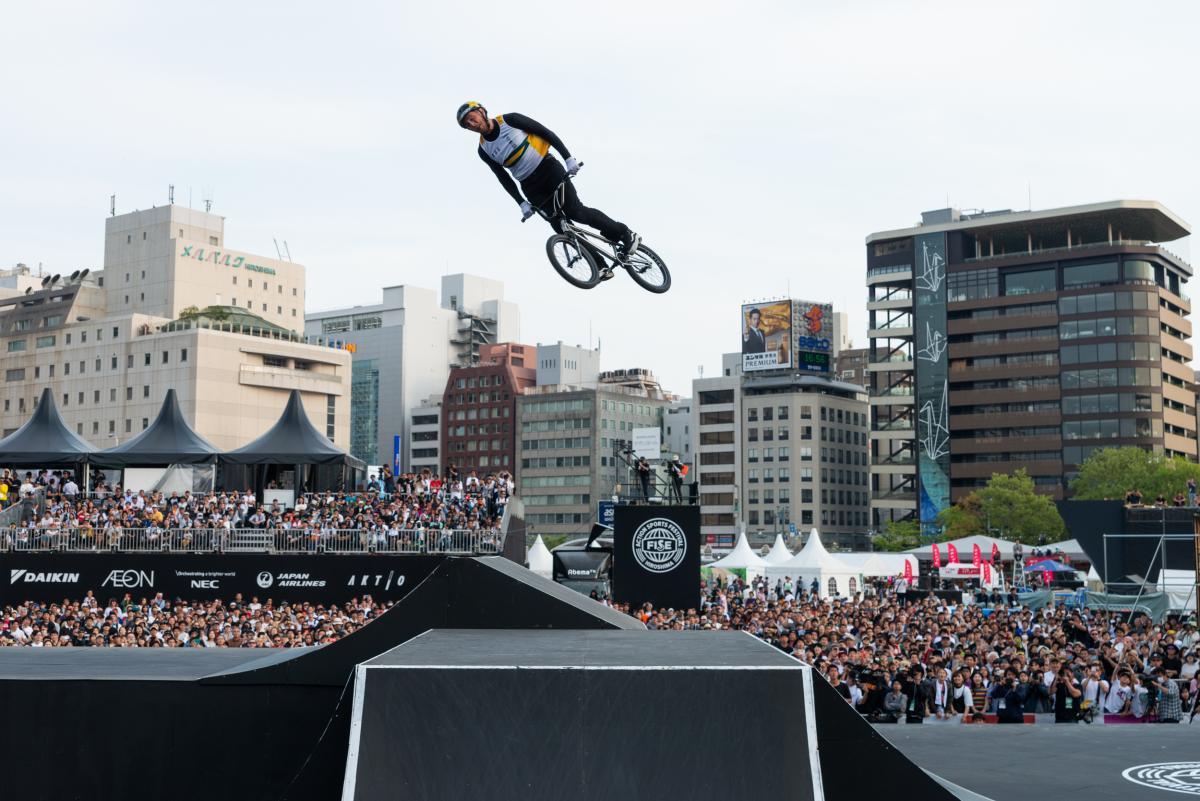 Anyone who believes that action sports are not popular clearly haven’t witnessed the 2019 edition of the FISE World Series in Montpellier, France. The 23rd episode welcomed more than 612,000 people over the course of its five days, making it one of the top three biggest outdoor sports events in France. The UCI’s BMX Freestyle Park and Flatland World Cups were part of the urban sports festival that also featured Olympic disciplines including skateboarding, climbing and potential future Olympic sports such as breakdancing and parcours.

Riding Flatland in front of 5,000 people only happens in Montpellier. Eight finalists from five different countries had the moment of their lives when it was their time to perform. The vibe was so amazing that the riders used this energy to do their best tricks. 17-year-old Takumi Isogai (JPN) brought the spins to the new oval flatland floor and put himself in a solid fourth position, just missing out on a podium spot at the UCI World Cup. His compatriot, Moto Sasaki, made sure that the Land of the Rising Sun claimed a top three result with a good variety of tricks. French crowd favourite and 2018 UCI BMX Flatland World Cup champion Matthias Dandois knows how to play the game. His originality combined with showmanship, flow and style shot him to a second place in Montpellier. Czech Republic’s Dominik Nekolny’s flawless flatland run sent him to the top step of the podium which was his first UCI BMX Flatland World Cup win.

Japan’s Misaki Katagiri proved to be the top Flatland woman and won once again but Germany’s Julia Preuss kept her honest with Austria’s Irina Sadovnik following in third.

Close to 70 Elite Men rode the UCI BMX Freestyle Park World Cup. The extra practice afforded by the agreeable weather was used to find the lines on the park and to dial in the big tricks that everyone had planned. With a first cut to 24 riders (semi-final) the pressure was already on with both runs counting towards one final score. Top riders like Australia’s Jaie Toohey, 2018 UCI World Cup Park champion Marin Rantes (CRO), Jeremy Malott (USA), Mike Varga (CAN) and Kenneth Tencio (CRC) missed the transfer to the final 24 but, looking at the list of riders who make it in, you can easily see how stacked the contest was.

Ten countries were represented in the next stage: cutting to a 12-men final. This time UCI athlete representative Ryan Nyquist (USA) also had to depart the contest along with 11 more big names in BMX Freestyle. Frenchman Anthony JeanJean squeezed in as rider number 12 to the delight of the crowd. As a young kid Anthony was watching the competition from the bridge and his dream had come true as he made it to the Elite final as a rider. Kyle Baldock (AUS) ended up in 10th place in Montpellier, moving him up 142 places in the Individual ranking which indicates the importance of these UCI World Cup events.

America’s Justin Dowell pulled a clean run with progressive tricks and could not be beaten. Russia’s Irek Rizaev came second and Logan Martin had to settle for third place after dealing with some food poisoning in the morning which cost him some energy. In the Olympic Nation Ranking Australia is in the lead with 7420 points followed by the USA (7010 points) and Russia (4470 points). The battle for first place (two Olympic spots) is on.

The USA scored well in Montpellier in the Women Park competition with three riders in the top five. Hannah Roberts brought her magic tricks to the course for a solid first final run and a deserved win. Out of 39 women, Perris Benegas of the USA made it a 1-2 for the United States of America. 19 years old Lara Lessmann (GER) scored a respectable 3rd place in France holding off Nikita Ducarroz (SUI) and Chelsea Wolfe (USA). Team USA has a solid lead in the BMX Freestyle Olympic Qualification Women ranking having gathered 9980 points over Germany’s 6760 points and current third place country Switzerland (3420 points).