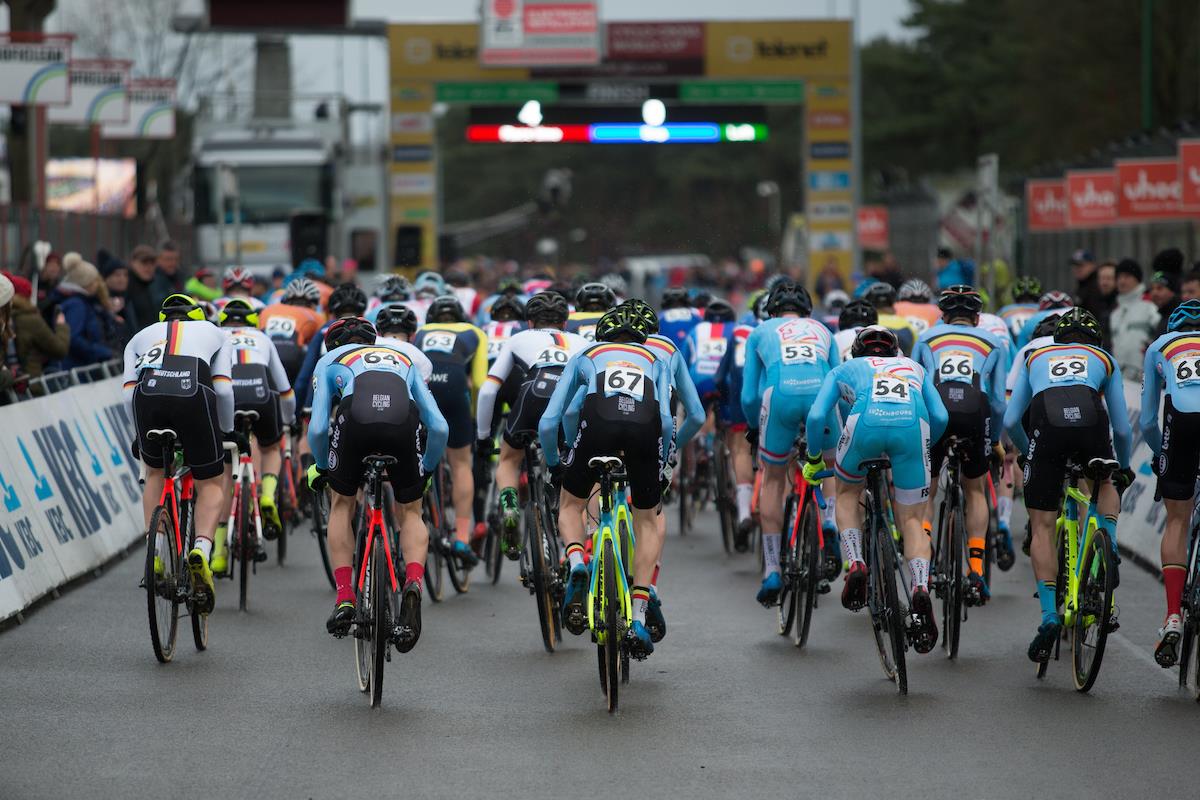 It has become a Christmas tradition in cyclocross that the best riders of the world head to Belgium on Boxing Day for the Telenet UCI Cyclocross World Cup round in Heusden-Zolder. The seventh round of the World Cup was raced on a 2,700 metres long course with its famous twisting off-camber climb, the long finishing straight on the former F1 car racing circuit and the multiple steep climbs and drops. Due to the dry conditions the course was even faster than during previous editions. On Tuesday, the site welcomed 270 riders from 19 nations.

UCI World Champion Wout van Aert (Crelan-Charles) was ready to continue his recent winning ways on the same course where he captured his first rainbow jersey in 2016. It did not happen. Mathieu Van der Poel (Beobank-Corendon) doubted to take the start on Tuesday afternoon due to a severe cold. Nevertheless, he took the start… and won! Van der Poel dropped van Aert during the fourth of nine laps, soloing to his fifth World Cup win of the season. With two more rounds left, he’s coming very close to a first overall World Cup victory. Van Aert was caught back by an impressive Laurens Sweeck (ERA-Circus) who went on to beat the UCI World Champion during an exciting battle in the final lap.

UCI World Champion Sanne Cant (Beobank-Corendon) extended her lead in the Telenet UCI World Cup of the Women’s category after capturing a hard-fought 100th career win. Halfway the race, Cant was part of the decisive move with Katherine Compton (USA) and Eva Lechner (CLIF Pro Team). A final acceleration from Cant at the final technical climbs and the resulting gap of ten metres was enough for the Belgian rider to get the win. Compton was second, ahead of the Italian Champion. It was the fourth World Cup win of the season for Cant who is well on her way to secure a third overall World Cup victory.

Laura Verdonschot (Belgium) was seventh in the Women’s race, which was more than enough to get the win in the Women Under 23 category. Fleur Nagengast (Netherlands) remains overall leader. Thomas Pidcock (Great Britain) captured a very close win in the Men Under 23 category. With his fourth World Cup win he secured the overall victory in the series. Thomas Kopecky (Czech Republic) is the new leader in the Men Junior category after his hard-fought win on Tuesday morning.

The 24 year-old Belgian rider is a cyclo-cross specialist, just like his twin brother Diether. His second place in Heusden-Zolder on Boxing Day will likely be regarded as a victory due to the current dominance of van Aert and Van der Poel. It’s the fifth World Cup podium in his career.

In the youth categories Sweeck showed a lot of promise by winning the Men Junior World Cup in 2010-2011 and finishing as runner-up in the Men U23 category at the 2015 UCI World Championships in Tábor (Czech Republic). In 2016, Sweeck scored the biggest win of his career when holding off Wout van Aert and Sven Nys at the final Bpost Bank Trophy round in Sint-Niklaas. Laurens Sweeck finished seventh (2016) and sixth (2017) at the UCI Cyclo-cross World Championships in the Men Elite category. Last year he was fourth in the UCI Rankings and third in the Superprestige series.