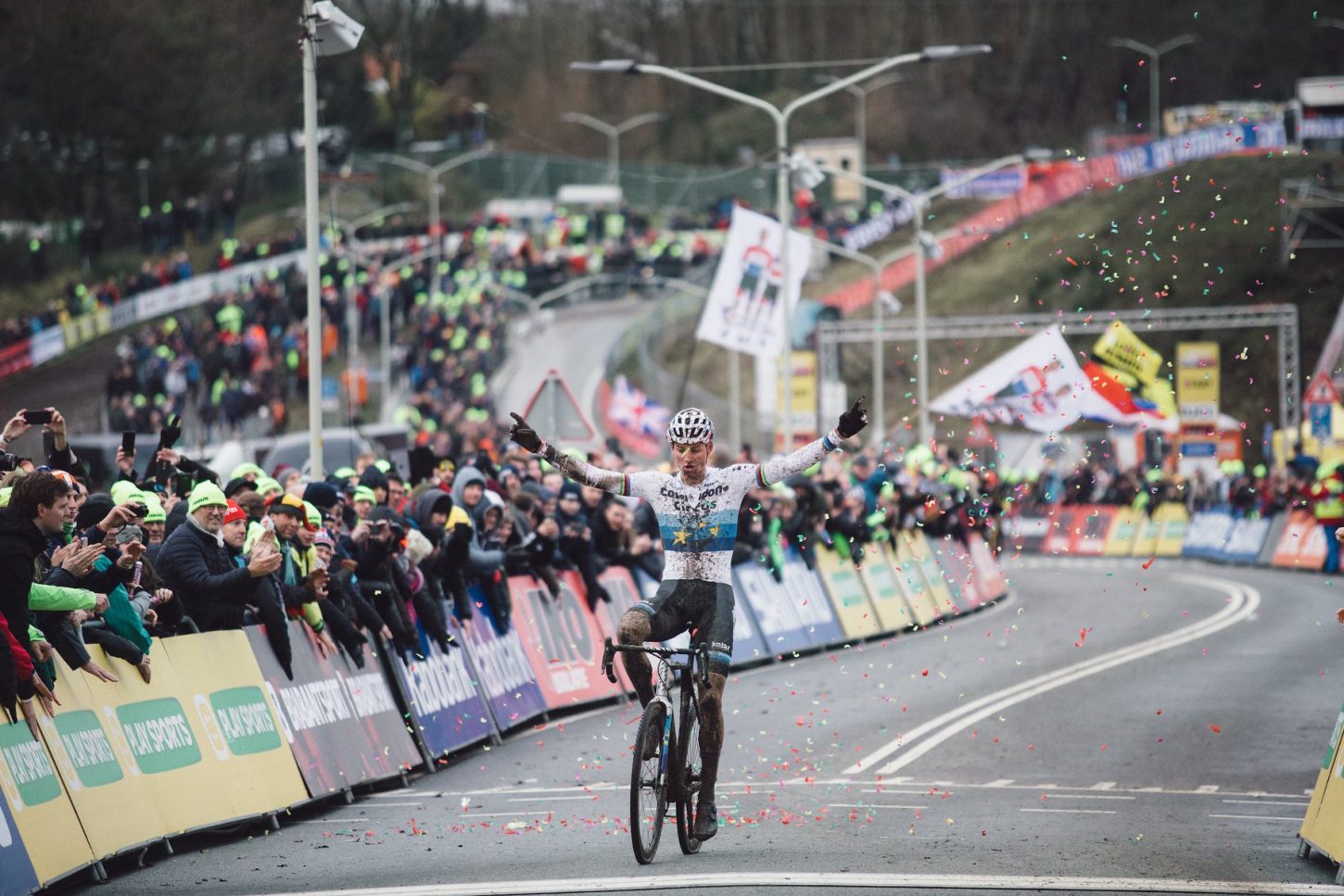 Mathieu van der Poel (Corendon-Circus) overcame a difficult moment during the first half of the race in the Men Elite category, but he bounced back and earned himself a nice birthday present – he turned 24 last week – with his sixth World Cup win of the season. The eventual winner briefly faded back behind race leader Toon Aerts (Telenet Fidea Lions) and chaser Wout van Aert (Belgium), who were fighting out a duel for the overall UCI World Cup victory. In that battle, Belgian champion Aerts held off a comeback from UCI World Champion Van Aert. Aerts’ second place in the Netherlands earned him just enough points to pass World Cup leader Van Aert and take his first-ever overall World Cup victory.

Marianne Vos (Liv-CCC) was already certain of the overall World Cup victory since last week’s victory in Pont-Château (France). In Hoogerheide, Vos led out the 75 starters early on but halfway through the race, Lucinda Brand (Team Sunweb) accelerated away from Vos, UCI World Champion Sanne Cant (Corendon-Circus) and others towards her third World Cup win of the season. A surprisingly strong Katherine Compton (USA) was a close second and Vos stood tall for third place, just ahead of Cant. The latter hops over European Champion Anne-Marie Worst (Steylaerts-777) to second place in the World Cup standings.

Despite crashing hard in Pont-Château last week, Yara Kastelijn (Steylaerts-777) captured her first-ever World Cup win in the Women Under-23 category in Hoogerheide. Clara Honsinger (USA) finished just ahead of pre-race favourite Ceylin Del Carmen Alvarado (Corendon-Circus). Alvarado held off Fleur Nagengast (Telenet Fidea Lions) which was more than enough to secure the overall victory in the World Cup in this category.

In the absence of overall UCI World Cup winner Thomas Pidcock (Great-Britain), UCI World Champion Eli Iserbyt (Belgium) completed a long solo to take his third win of the season in the Men Under-23 category. Iserbyt won ahead of Antoine Benoîst (France) and Ben Turner (Great-Britain) and concludes the World Cup in second place.

Witse Meeussen (Belgium) was already certain of the overall UCI World Cup victory but he added a hard-fought third World Cup win in the Men Junior category to his tally. Meeussen held off Carlos Canal Blanco (Spain) on Sunday morning.

Next week, Eli Iserbyt (21) will head to Denmark with the mission of capturing a third rainbow jersey in the Men Under-23 category. Despite his young age, the Belgian rider already sports an impressive palmarès in the cyclo-cross discipline, racing since he was 11. Back in the 2014-2015 season, Iserbyt became the UCI World Cup winner in the Men Junior category. During the 2015-2016 he moved up to the Men Under-23 category and immediately won the World Cup and the Heusden-Zolder 2016 UCI Cyclo-cross World Championships. Iserbyt struggled to keep up that same level during the 2016-2017 season.

Last season was much better but Iserbyt was confronted with another talented young rider: Thomas Pidcock who dominated the World Cup. At the Valkenburg 2018 UCI World Championships, Pidcock had an off-day while Iserbyt powered to a second world title in this category. This season, Iserbyt kicked off the season with two top-10 results among the Men Elite category at the two World Cup opening rounds in the USA. Pidcock has once again dominated the World Cup but next week, the two riders will clash again as they are the top favourites for the win in Bogense.