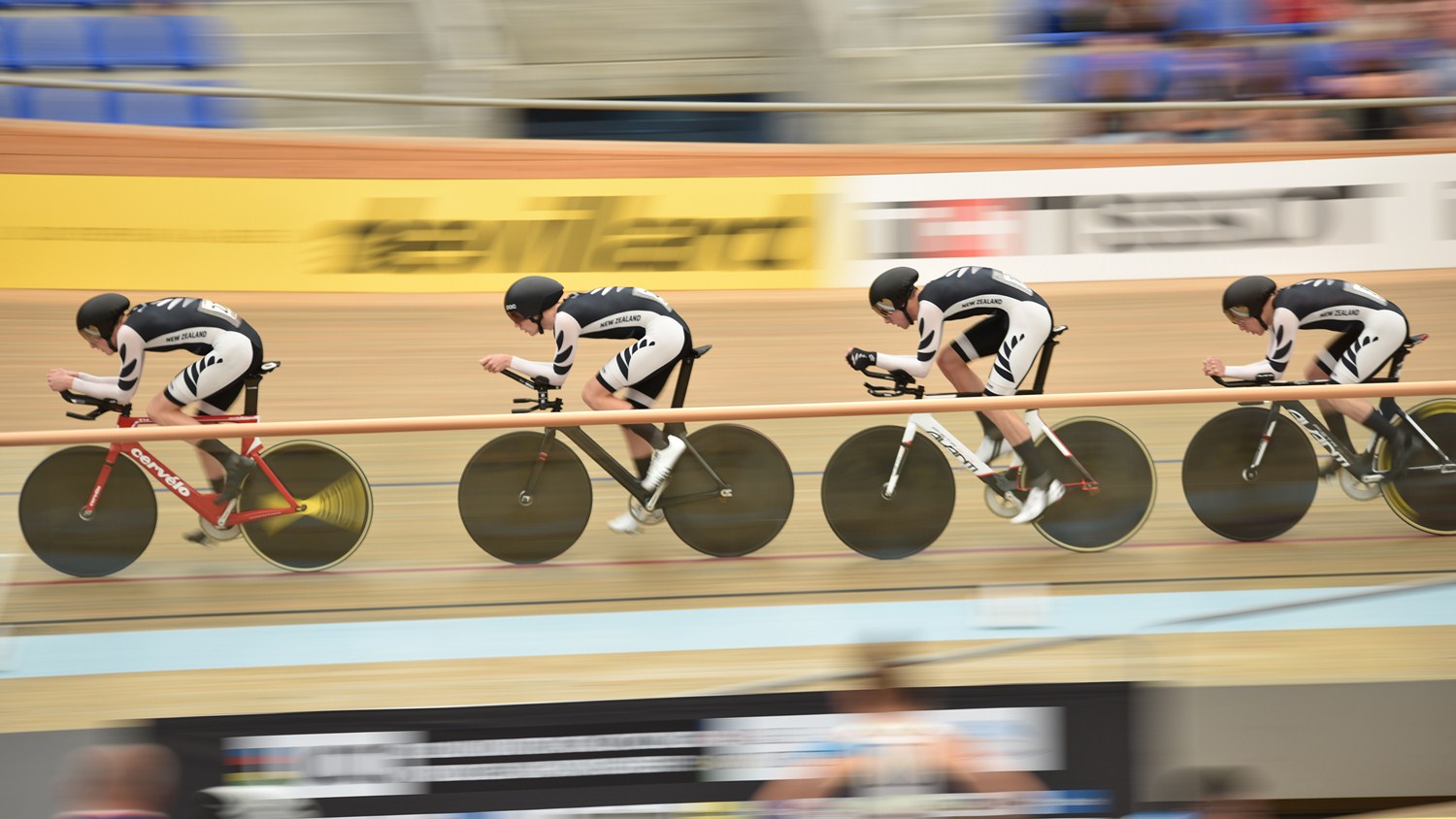 The second day of racing at the UCI Junior Track Cycling World Championships saw titles go to New Zealand, Korea, the Czech Republic and Italy. Meanwhile India’s Esow Esow created somewhat of a sensation at the UCI World Cycling Centre in Aigle, Switzerland, with his silver medal in the keirin.

In qualifications and the first round against Australia, the Kiwi team (George Jackson, Corbin Strong, Bailey O’Donnell and Finn Fisher-Black) started off modestly and picked up pace towards the end of the 4 kilometres. They weren’t about to change a winning strategy, and executed it to perfection to   beat France in the gold medal final. The New Zealanders came from behind to eventually win in a blistering time of 4.01:685, more than 3 seconds ahead of the French.

Corbin, who was in the bronze medal-winning team last year in Montichiari (Italy), explained: “We have some roadies in the team so we like to start off slower and get into the race. We have had awesome coaches to get us ready and we knew we had good times in training.

“During the race we could hear our coach Myron Simpson yelling at us on the corners and we got the message!”

Corbin added it helped that all team members get on so well: “We’ve been racing together since we were 13. We’re super close. I couldn’t be prouder of the boys!”

Australia ended a two-year drought of medals in the team pursuit at the UCI Junior World Championships, claiming bronze in a nail-biting race that saw them beat Italy by less than three-hundredths of a second.

Jooyoung Park gave Korea its second Scratch Race gold of the Championships after that of Jieun Shin in the Women’s Scratch Race on Wednesday. After an initial attack by South African Ricardo Broxham and France’s Samuel Thibaud was caught by the bunch, Park made the most of a slight reduction in tempo to place his own attack. It was a successful move that saw him catch the bunch with 16 laps of the 200m track still to race.

As Park rode safely to victory in the pack, an apparently inexhaustible Thibaud launched another attack and looked set for silver until a blistering last lap from Poland’s Filip Prokopyszyn saw the Pole claim second, with Thibaud coming in for third.

Newly-crowned UCI Champion Jooyoung Park said his timely attack was thanks to his coach: “He told me to wait until the guys were tired. Then he would make a sign when I had to go. I stayed calm and didn’t panic when the first ones attacked. I was getting information the whole way. Yes, I was very tired but also so excited!”

“I was surprised, and I still cannot believe I am World Champion,” said a nearly speechless winner. “My plan was just to start the final sprint from the front, and it worked.”

Meanwhile India’s Esow Esow made history by becoming India’s first-ever medal winner at the UCI World Championships. The Asian Continental Champion in the team sprint, individual sprint and keirin put enormous pressure on the Czech in the final sprint to the line but had to be satisfied with the silver medal.

“I just wanted to stay at the front and avoid getting involved in any crashes,” said the first-year Junior, a product of the UCI World Cycling Centre satellite in New Delhi. “I believed I could win but I am still happy… well a little bit happy.”

Italy largely dominated the New Zealanders in the team pursuit final, quickly gaining time and eventually overlapping the Kiwis before the end of the race.

Vittoria Guazzini, who was also part of Italy’s gold-medal team in 2017, said this second consecutive victory showed that Italy was on the top: “We knew we could do a good performance and we just gave it everything on the track. We knew we had a big advantage and we could see we were getting closer and closer to catching them (the New Zealanders). But in a 4km race you can never be sure. It is a great feeling to have won again.”

Third place went to Great Britain, who got the better of Australia in the ride-off for bronze.