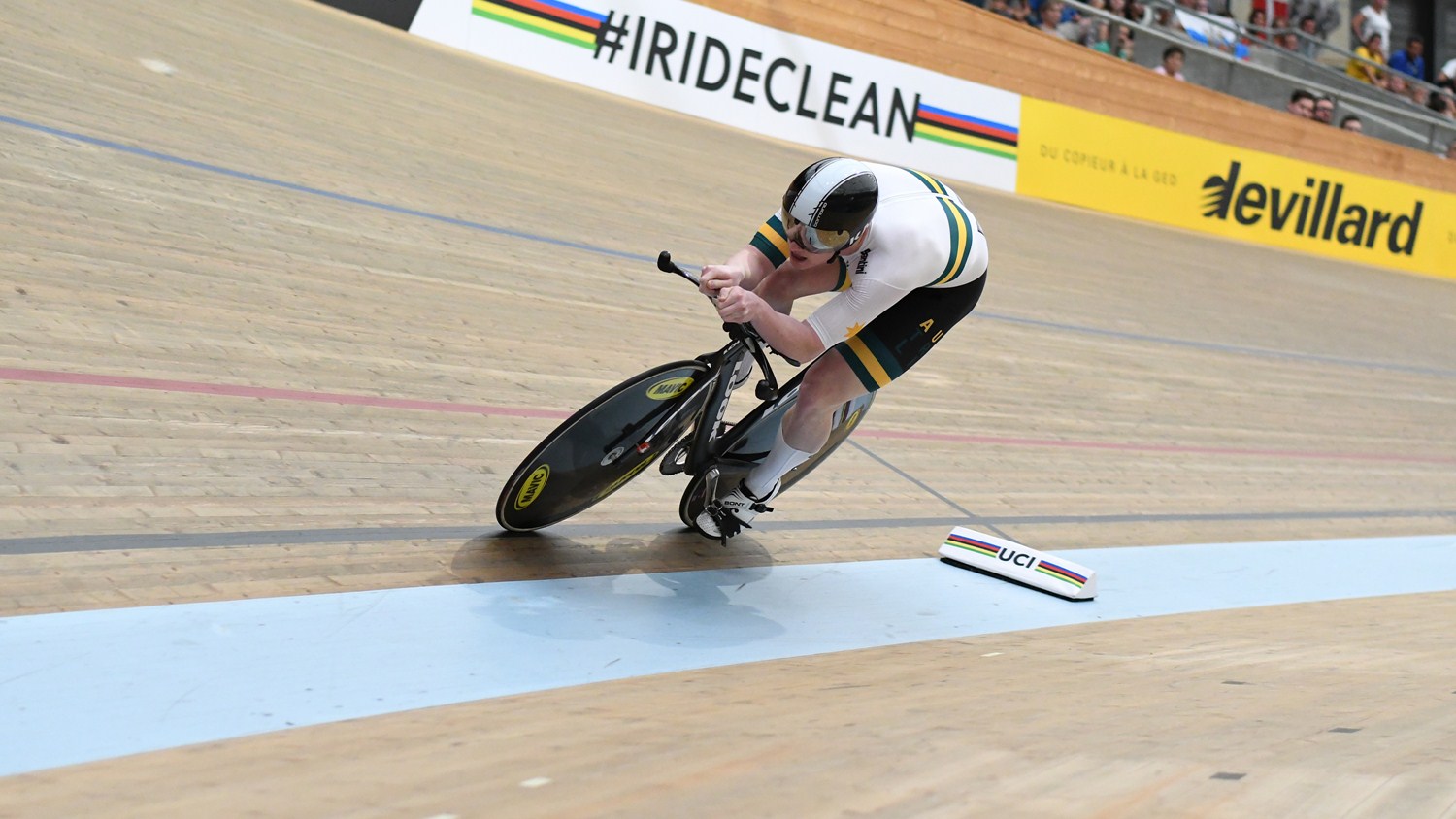 The last day of competition at the UCI World Cycling Centre velodrome, saw a third world record broken, in the Men’s 1 kilometer time trial. Meanwhile, cycling’s latest addition to the Olympic programme, the Madison, provided some of the most exciting competition of the UCI Junior Track Cycling World Championships in Aigle, Switzerland.

After silver in the individual sprint yesterday, Australian Thomas Cornish went one better on the final day of racing.

In the qualifying of the 1km time trial on Sunday morning, Cornish broke the Junior world record which has been held for the last two years by Canadian Stefan Ritter.

“It (the world record) has been at the back of my mind but I didn’t really think it was possible,” he said afterwards. “I was feeling really good but didn’t realise how fast I was going until I crossed the line. It still hasn’t really sunk in!”

Boosted by his new unofficial world record of 1:00.498, Cornish lined up last of the eight riders in the final in the quest for the world title.

“That was the hardest really. Everyone was congratulating me for my world record but I hadn’t won the title yet,” he said. For the final, he had to beat the time of 1:01.830, set by Czech Jakub Stastny to take the victory. And he did. With a time of 1.00.979, he added the world title to his world record.

The Madison will make its first-ever appearance at the Olympic Games in Tokyo 2020, and the Men’s and Women’s Madison competitions in Aigle whetted the appetites of the public and athletes alike. The bunch racing delighted the crowds with its spectacular format whereby teams of two take turns riding full gas before arm-slinging their partner into the competition and moving up the track to ride at recovery pace.

In the Women’s Madison, 13 teams set off directly for the final of 20 kilometer (100 laps), with riders trying to earn points during the sprints every 10 laps.

The French team of Victoire Berteau and Marie le Net have been riding together for two years and know each other inside out. It showed. The pair worked together perfectly and was too strong for the rest of the field, finishing with 70 points, after winning eight of the 10 sprints and gaining a lap on the bunch.

“I don’t know how we did it,” exclaimed le Net, bronze-medallist in the same event last year. “We had such good legs, and even when we were easily ahead and our coach (who we really want to thank) told us to calm down, we just kept going.”

Her partner added: “I looked up at the table now and then to check what was happening. It’s unbelievable.”

Russia finished comfortably in second place, while the battle for third was fierce until the end: Australia and Italy were tied on 34 points before the last sprint. A blistering last lap saw Australia pip Italy on the line, to gain an extra four points to Italy’s two and take the bronze medal.

For the Men’s Madison, the riders competed in qualifying rounds in the morning, with the first seven teams of each heat going through to the 28 kilometer (140-lap) final.

The Australian pair Blake Quick and Lucas Plapp looked strong throughout, earning points in 12 of the 14 sprints, and finishing with 47 points and the victory. Despite training together, it was the first time that Quick and Plapp had raced a Madison as a team: “We didn’t know what to expect really,” said Plapp, also gold medallist in the points race. “Our plan was to take a lap early and wear them down, but everyone was so strong. It came down to sprints.”

His partner, bronze medallist in the Omnium on Saturday added: “It was tough, but we were optimistic. You expect tough competition at a UCI World Championships so it’s awesome to win.”

The Russian duo of Lev Gonov and Gleb Syritsa repeated their silver medal performance of last year, while Denmark held off a strong finish from Germany to take bronze.

A medal a day. Well almost. Germany’s Lea Sophie Friedrich won her fourth medal in the five days of competition: this time in the keirin. Already UCI World Champion in the team sprint, individual sprint and 500m time trial she sailed through the first two rounds of the keirin competition before riding a perfect tactical race in the final, staying behind the leading rider until launching her final sprint.

“Just incredible,” were the only words she had to describe her five days at the UCI World Cycling Centre. The quadruple UCI World Champion admits to feeling very tired and looking forward to two weeks holiday with no cycling involved.

The two other athletes on the keirin podium were Poland’s Nikola Sibiak (second) and Russia’s Iana Tyshenko (third).

Germany finished the five days of competition at the head of the medals table with four gold and three bronze, followed by Italy (four gold) and Australia (three gold, two silver and four bronze).