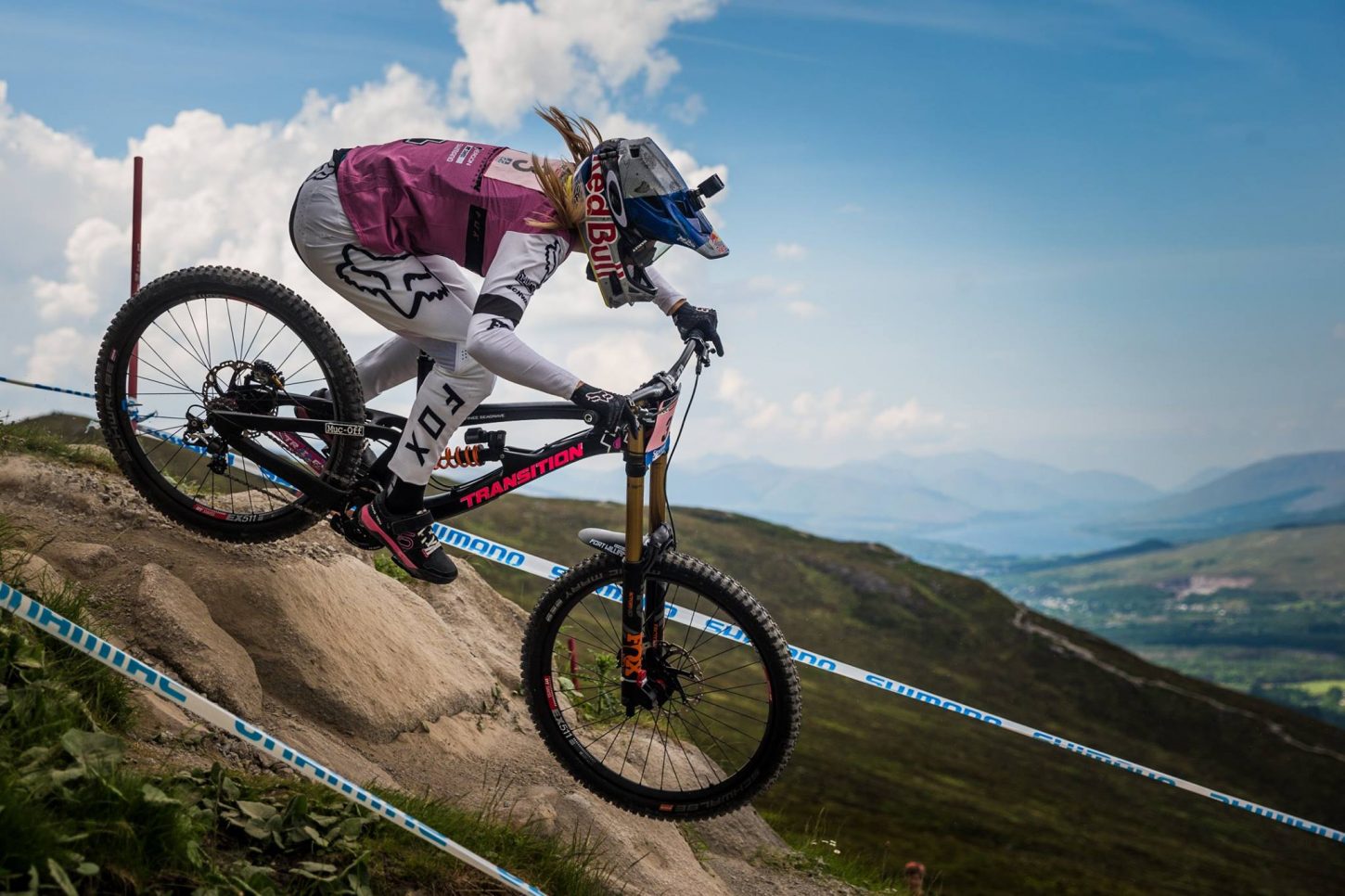 Just over one month after the opening round of the downhill competition of the 2018 Mercedes-Benz UCI Mountain Bike World Cup, the gravity competition resumed in the classic Scottish venue of Fort William, on June 1-3.

Fort William is the longest course on the UCI World Cup circuit, and places great physical demands on the riders, who must have endurance as well as technical skills to do well. Heavy rain the night before the Final soaked the ground, affecting many of the lines.

Tahnée Seagrave (Transition Bikes/MUC-Off) continued a long tradition of British wins at Fort William, as she took her first World Cup win on home soil, the fourth of her career. Marine Cabirou (VoulVoul Racing) took the lead with six riders to go and held it until Seagrave took to the start with two riders remaining. UCI World Cup leader Myriam Nicole (Commencal/Vallnord) was next, but crashed and had to settle for second. Rachel Atherton (Trek Factory), a three time winner at Fort William, had qualified fastest but snapped her chain out of the start, remarkably still finishing third, ahead of Cabirou. The overall standings are unchanged, with Nicole at 430 points, Atherton 30 back and Seagrave on 386 points.

The men’s race saw unheralded Reece Wilson of Great Britain take the lead halfway through the men’s field, and hold onto it until Amaury Pierron (Commencal/Vallnord) finally displaced him with seven riders to go. A number of top riders suffered mechanicals or crashes, including UCI World Cup leader Aaron Gwin (YT Mob) and top qualifier Luca Shaw (Santa Cruz Syndicate). Loris Vergier (Santa Cruz Syndicate) took second and Troy Brosnan (Canyon Factory) third, just ahead of Wilson. It is the first World Cup win for Pierron. Gwin continues to lead the standings with 279 points, only four more than Vergier, who jumps from tenth to second. Pierron moves up to third from 16th, a further two points back.

France’s Amaury Pierron, riding for the Commencal/Vallnord team in men’s downhill racing has been knocking on the door at the Mercedes-Benz UCI Mountain Bike World Cup for a quite a while, and finally broke through with his first victory in Round 2 of the 2018 season at Fort William, Scotland. In 2017, Pierron was second at the Val di Sole World Cup, as well as finishing second at the French national championships for the third straight year as an Elite, after winning in 2014 as a Junior.

Watch the 2018 Mercedes-Benz UCI Mountain Bike World Cup free of charge, live and on demand, at redbull.tv/uci. And get the latest on everything bike-related at the Red Bull Bike Channel: redbull.tv/bike.

Red Bull TV is distributed digitally at www.redbull.tv and as an app across mobile phones, tablets, consoles, OTT devices and Smart TVs.