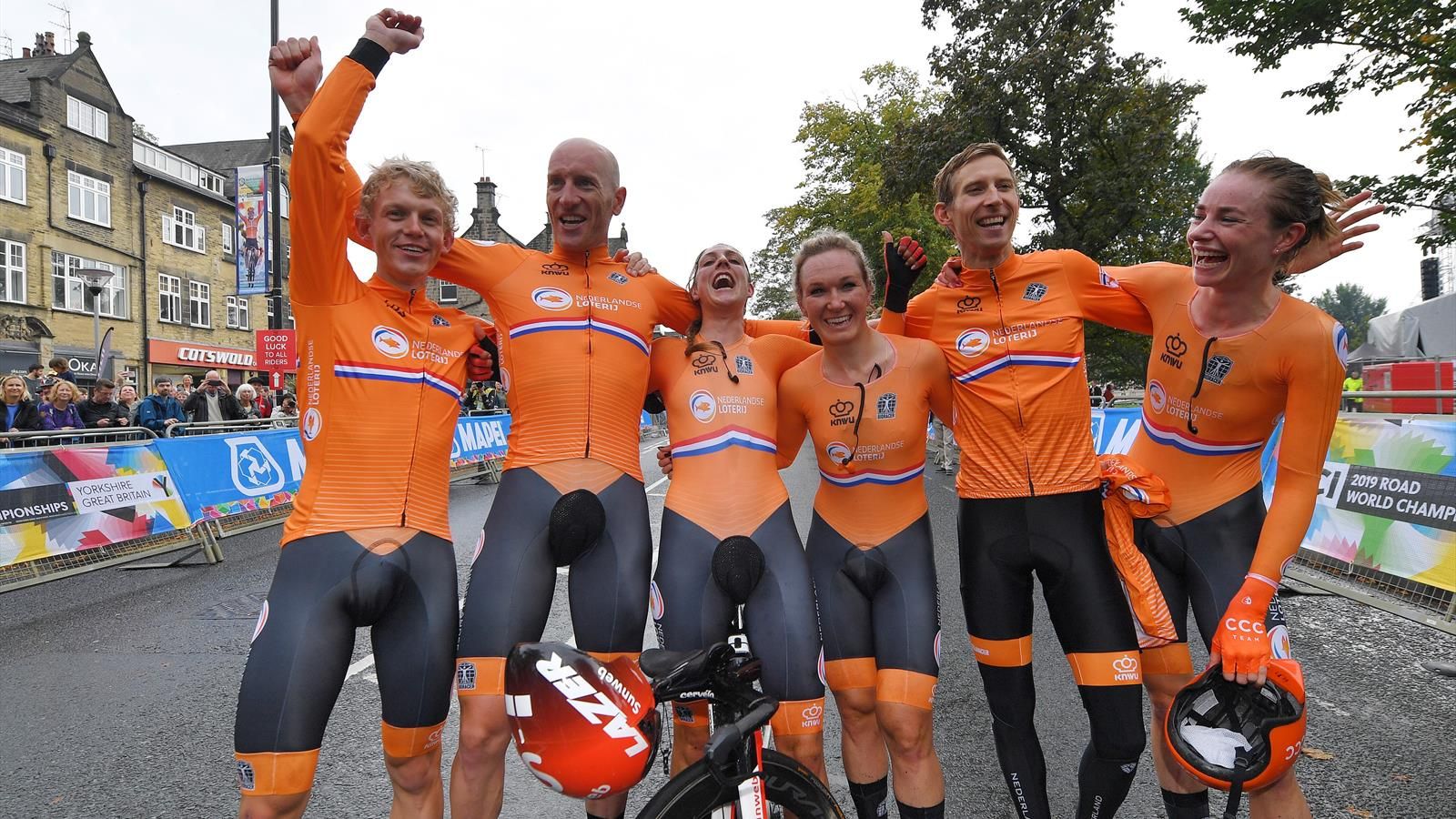 The Netherlands claimed the first ever UCI world title for Team Time Trial Mixed Relay as Lucinda Brand, Riejanne Markus, Amy Pieters, Koen Bouwman, Bauke Mollema and Jos van Emden outclassed Germany and Great Britain while the unlucky Italians missed out on a medal due to a puncture in the last kilometres.

“It’s fantastic to be World Champions,” Mollema reacted. “This was something much harder than what we normally do on a bike. It was a hard course with lots of ups and downs. Technically, we did a great performance. My two team-mates were pulling so hard, they did an amazing job. Then we had to wait for about forty minutes to know if we’d win, it’s something special but it was also great to support our female team-mates and share the win all together.”

Mollema, along with Pieters, Markus and Bouwman were already part of the squad that had become European Champions in the new format last month on home soil in Alkmaar. In Harrogate the Worlds TTT Mixed Relay consisted of two 14km circuits of the town for each of the 11 teams in contention – ten countries, all from Europe, and the UCI World Cycling Centre Team – sending their men’s trio off for the first lap before passing the baton to the three women for the second lap.

Fourth to ride, the representatives of the home nation, Lauren Dolan, Anna Henderson, Joscelin Lowden, John Archibald, Daniel Bigham and Harry Tanfield, took the lead with a time of 39’18’’. Switzerland made a close to challenge Great Britain’s time, fractionally up at the first split, but their performance was hampered by Elise Chabbey’s mechanical on the run to the finish so it was France who set the second best time despite losing Jérôme Cousin before the handover to the women. It was party time on the hot seat as the British men and women were laughing and joking while watching their competitors scoring times that fell short of theirs.

It was a different story when Van Emden and Mollema crossed the line with an advantage of 20 seconds, leaving Brand, Markus and Pieters with the opportunity of a perfect platform on which to demonstrate the strength of Dutch female cycling.

Italy were en route to a medal until Elisa Longo Borghini sustained a flat tyre in the difficult part of the course after they had recorded the best time at the 20.2km mark with four seconds over Germany… that was before The Netherlands passed with an advantage of 28 seconds over the Italians.

Longo Borghini courageously made it back to her two team-mates, Tatiana Guderzo and Elena Cecchini, who, with hindsight, might have chosen to slow and wait sooner. The final effort by Longo Borghini and Guderzo wasn’t enough to edge out Great Britain as they were five seconds adrift on the line. The British athletes congratulated each other again as their medal was secured.

It turned out to be the bronze for Britain as Germany, the second last team on the road, featuring Lisa Brennauer, Lisa Klein, Mieke Kröger, Tony Martin, Nils Politt and Jasha Sütterlin, were 28 seconds up on Great Britain. And it came as no surprise when the Dutch ladies, who held all the best intermediate time checks, maintained a 22-second lead to the end when Markus and Brand crossed the finishing line slightly ahead of Pieters.

“This is amazing,” Brand commented a few minutes later. “It’s super cool. It was really hard to get in to it and you think you have really bad legs, but once over that, you can keep fighting against the pain. It’s short but hard. Being World Champions is very unique. We’re part of history now. We came for a medal. To finish with a win is amazing.”