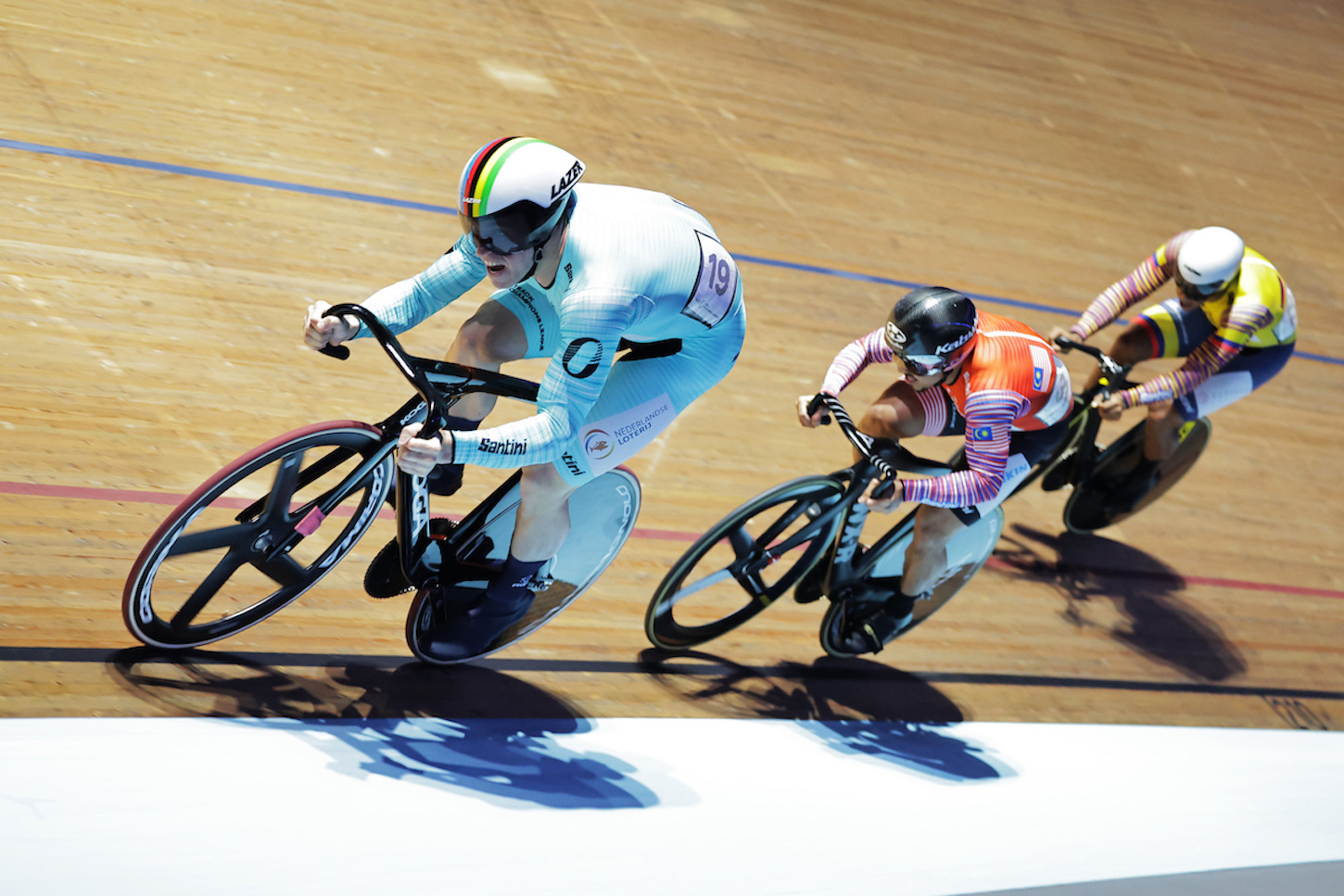 A thrilling third round of the UCI Track Champions League in Saint-Quentin-en-Yvelines saw home favourite Mathilde Gros (France) move to the top of the Women’s Sprint standings while Claudio Imhof (Switzerland) became the new leader of the Men’s Endurance series.

Great Britain’s Sophie Lewis was the first winner of the night in the Women’s Scratch race with compatriot Katie Archibald triumphing in the Women’s Elimination for the second week in a row.

In the Men’s Endurance races, Sebastián Mora (Spain) sealed his first win of the season in the Scratch before Oliver Wood (Great Britain) outpaced outgoing leader Mathias Guillemette (Canada) to triumph in the Elimination.

Lavreysen went wheel-to-wheel with Australia’s Matthew Richardson once again in the Men’s Sprint contest. The Dutchman came out on top for the first time in the Sprint race before Richardson returned the favour. The 23 year old took his maiden UCI Track Champions League victory over the 11-time UCI World Champion in the Keirin final, having finished second to Lavreysen twice before in that particular category.

Steffie van der Peet (Netherlands) came out on top in the Women’s Keirin, but the loudest cheer of the night was saved for Gros, who produced a masterclass in the Women’s Sprint final to triumph over another outgoing leader, Martha Bayona (Colombia).

Tonight’s results have set the scene perfectly for the final two rounds of action which will be taking place back-to-back in London at Lee Valley VeloPark next Friday and Saturday (December 2-3).

Women’s Sprint winner Mathilde Gros said: “It was amazing tonight. I was happy to win in front of my family and the crowd was just incredible, they pushed me a lot and I gave everything – I am so happy to have won tonight. My parents, auntie, and friends were all here. My family took the car this morning and travelled seven hours, and they go back tomorrow morning, I am so thankful for that.

“The pressure was a good pressure, you can feel the public push you and tonight was the same. I think in two years, it will be incredible for us [to compete here at the Olympics] – no pressure, just pleasure.”

Women’s Elimination winner Katie Archibald said: “I never feel too stressed with Elimination races because you just get to ride hard. I tried to go with a bigger gear for this round because there are so many nice points on this track, but I was 100% over-geared. I had to stomp on my pedals, so I’ve learnt something for next week.

“I’m not elated that I don’t have the jersey and I’m pretty motivated heading into London next week. I’ve taken this whole series very seriously and to go into the finale still in contention, after not thinking that would be the case after Round 1, is nice. I’m going to try and do everything perfectly to give myself the best chance of winning the series.”

Women’s Scratch winner Sophie Lewis said: “That was not how I normally race a Scratch, I decided to go with a bigger gear than I normally do. When I saw I had a gap, I thought to myself ‘why did I hesitate a little bit before I went?’ but then I just went into time trial mode and saw my lead getting bigger, so I started pushing on and counting down the laps until the end. I’m pretty happy with that victory and I feel like I’m getting better with every race. It’s been a good night.”

Women’s Keirin winner Steffie van der Peet said: “I positioned myself behind Kelsey Mitchell and followed her because I knew she was fast. I managed to stay on her wheel and then in the last lap I thought ‘I can go past her’, and it worked. It feels really good to have won because I’m riding against the fastest riders in the world.”

Men’s Sprint winner Harrie Lavreysen said: “Finally! I think it was a really good race, and it was also a good race from Matthew [Richardson]. He led it out well from the front but I was really pushing him to maximum speed. On the final lap I gave it my all, took the fight to him, and I’m happy I was able to take over him.”

Men’s Keirin winner Matthew Richardson said: “Basically, I had Harrie [Lavreysen] in front of me and he was pretty quick. I just needed to give him a good gap, I didn’t want to come around him because he would then probably then just come back around to me. So I waited, left a good gap and waited for [Stefan] Bötticher to come, which forced everyone in front to go. I then basically just managed Bötticher, and did that really well with a lap to go. Harrie was fully committed and ready to go and I was right on him. I started the move out of bend two because I knew I needed to start going early. Harrie did a really good ride, he stayed out of the sprint lane and forced me wide, but I was just coming with too much speed and managed to get around.

“I will approach the last rounds in London the same as I have done with all of the other races – make smart decisions and the result is going to be the result. I just need to stick to my processes, and whatever happens, happens. I have just got to be happy with my performances so far. If it all goes wrong in the last two rounds, then so be it. I’ve had an absolute blast so far so I hope I can carry those vibes on to London.”

Men’s Scratch winner Sebastián Mora said: “It was a very hard race. The Canadian guys went on the attack in the very first lap, which made it a bit more selective, and then in the last four or five laps it was really fast. I tried a late attack and it turned out to be successful, so that was fantastic for me. I love riding this track and it holds a lot of good memories for me. I’m definitely tired after three weeks of tough racing, but there’s only one week to go now so I will continue to give it my all.”

Men’s Elimination winner Oliver Wood said: “The race was pretty hot from the start. There was a few key sections where it was just a steady pace at the front; it wasn’t too hard and I wasn’t too concerned to be honest – maybe I should have been a bit more aware – by the time I knew it, there were only six guys left. Claudio [Imhof] was really strong riding at the front and I got lucky a few times, people riding pretty hard when I was near the front, managed to not get caught out around the back sprinting. Before I knew it, it was one-versus-one at the end and I thought ‘I’ve come this far, I may as well dig even deeper and get the win’.

“It feels pretty good, I have two wins this season and I didn’t think I was really going to be capable of that after the Scratch race but I pulled it out of the bag and I guess that’s what matters.”

Francois Ribeiro, Head of Discovery Sports Events, said: “We were treated to a night of incredible action in Saint-Quentin-en-Yvelines. The noise inside the velodrome was deafening every time the French riders were on the track and I’m delighted we’ve been able to bring the UCI Track Champions League to this iconic venue. It’s all still to play for in each of the four blue jersey competitions and I am looking forward to seeing the series conclude in spectacular fashion in London next weekend.”