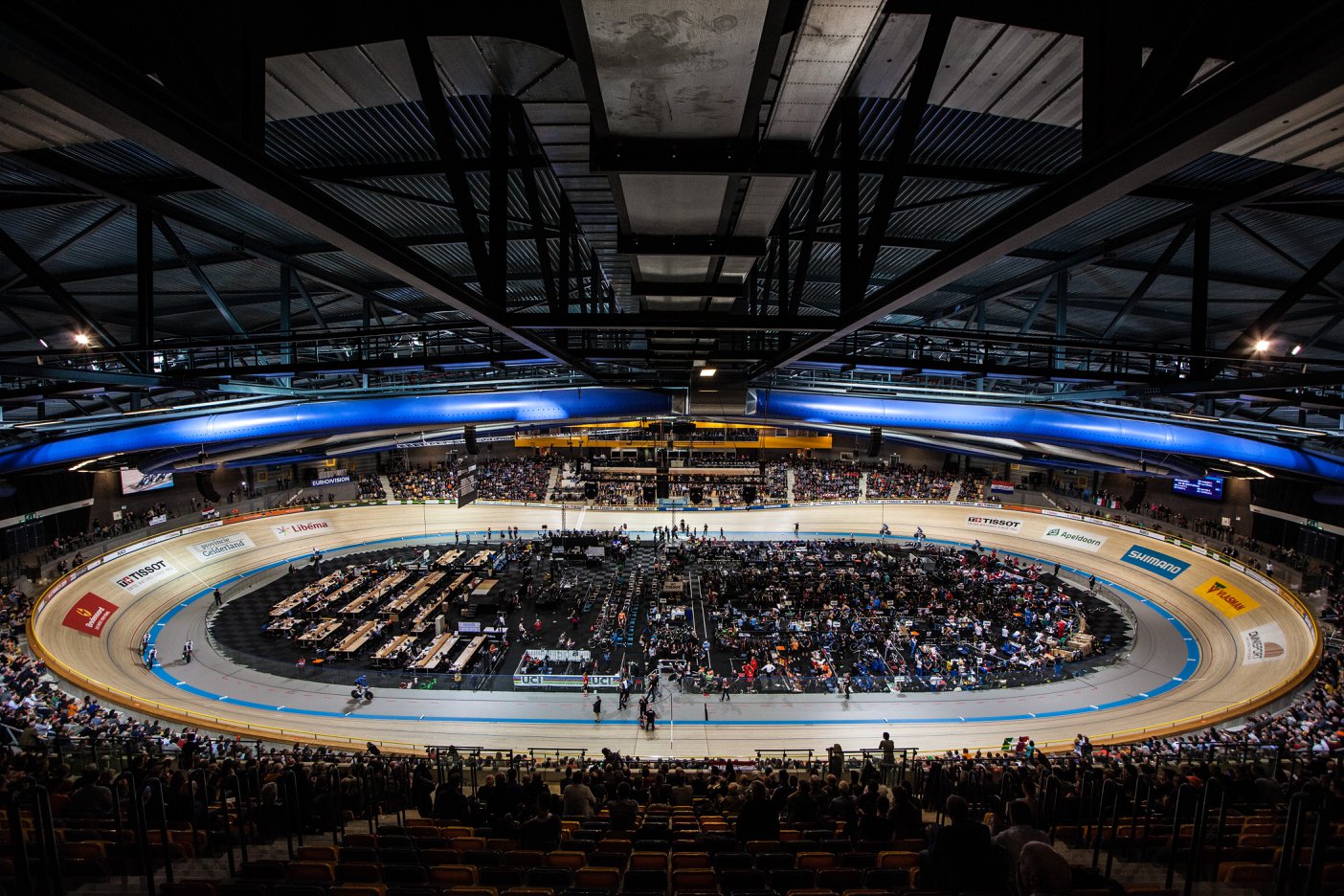 THE NETHERLANDS AND GERMANY TAKE HOME GOLD AT TRACK WORLDS

The Dutch national anthem, the ‘Wilhelmus’, sounded twice on the opening night of the Track Cycling World Championships in Apeldoorn. Germany won the remaining gold medal.

By winning the scratch, Kirsten Wild took home the first world title of the tournament. The German team of Pauline Grabosch, Miriam Welte and Kristina Vogel were the fastest in the team sprint event. And for the second time on Wednesday evening the Dutch team consisting of Nils van ‘t Hoenderdaal, Jeffrey Hoogland, Matthijs Büchli and Harrie Lavreysen wowed the home crowd by taking the gold medal in the team sprint.

Kirsten Wild didn’t wait for the sprint in the scratch but countered an attack by Katie Archibald. She then left the British rider behind and continued to win the gold medal. Jolien d’Hoore (Belgium) and Amalie Dideriksen (Denmark) joined Wild on the podium.

Wild naturally was very happy with the win. “It is very special to start the World Championships with a victory like this. I tried to keep calm at the beginning of the race because I knew the competition would be watching me on my home track. I would not be tempted to try something. When Katie Archibald went, I knew I had to react. She was one of the riders I had in mind. There is always the risk to be left empty-handed but it worked out wonderfully.” Wild will also ride the omnium, points race and madison in Apeldoorn.

Kristina Vogel was happy and emotional after her win in the team sprint. “It was special for me to be watching the first round trackside. It made me a little anxious but I could save energy for the final because Pauline (Grabosch) rode. It turned out to be the right choice. We missed out on the rainbow jersey for a couple of years but now we are on top again. It’s a wonderful start to the World Championships. The German sprint team now has a gold medal and rainbow jersey and the tournament can only get better from now on. The pressure was on the Dutch team in front of their home crowd. The crowd really backed the home team but we have the gold medal.”

In the men’s team sprint, Jeffrey Hoogland happily showed his rainbow stripes. The Netherlands proved to be the fastest in the final against the British team. France took home the bronze medal.

“It’s very special to win my first world title in front of the home crowd. I have been part of this since 2013 and now it’s finally gold,” Hoogland said.

Matthijs Büchli was a happy man as well. “We have been close for a long time. Nils van ‘t Hoenderdaal really made the difference with his super fast start. Harrie Lavreysen is a stable force in the team and then Jeffrey and I could finish it off. What an amazing start to our World Championships!”

The Germans and Dutch collected the world titles on the opening day but on the second day four different nations took the four world titles on offer in Apeldoorn. The British men won the team pursuit and the American anthem sounded for the American women’s team pursuit. Belorussian Yauheni Karaliok won the scratch and Colombian sprinter Fabian Hernando Puertas took home the gold medal in the keirin event.

Karaliok managed to take a lap in the scratch with Italian Michele Scartezzini (silver) and Australian Callum Scotson (bronze) early on in the race. The Belorussian rider gets to wear the rainbow jersey for a year.

Fabian Hernando Puertas conquered the keirin world title ahead of Tomoyuki Kawabata from Japan and Maximilian Levy from Germany. Levy battled with Matthijs Büchli for gold but had to settle for bronze.
Team sprint winner Büchli was left with nothing but accepted the outcome of the race. “It was a hard keirin final. There were six very strong riders at the start and you all fight for the win. The sprint was a little bit too long for me but I had reached the point of no return. That’s keirin.”

The women’s and men’s team pursuit teams had done their qualification rounds on Wednesday and rode the finals on Thursday. The British and Danish men rode against each other in the final for gold. After a fast opening, the British team closed the gap and build up a solid lead. The Italians beat the Germans for the bronze.

The experienced Ed Clancy returned to the team pursuit last winter and led his fellow countrymen Emadi, Tanfield and Hayter to gold. “We were here with some young riders but it’s unbelievable to see how fast we went. It’s really great that we managed to win the gold with this team.”

In the women’s team pursuit the United States of America were impressive. They beat Great Britain in the final. Valente, Dygert, Geist and Catlin received a new rainbow jersey. It was the first world title for Team USA in Apeldoorn. The Italian women won the final for bronze.

The home crowd watched Shanne Braspennincx and Laurine van Riessen reach the quarter finals in the sprint event. They didn’t manage to reach the semi finals which will be held on Friday.

Scratch world champion Kirsten Wild will be back on the boards on Friday for the women’s omnium. The men ride the points race and individual pursuit.