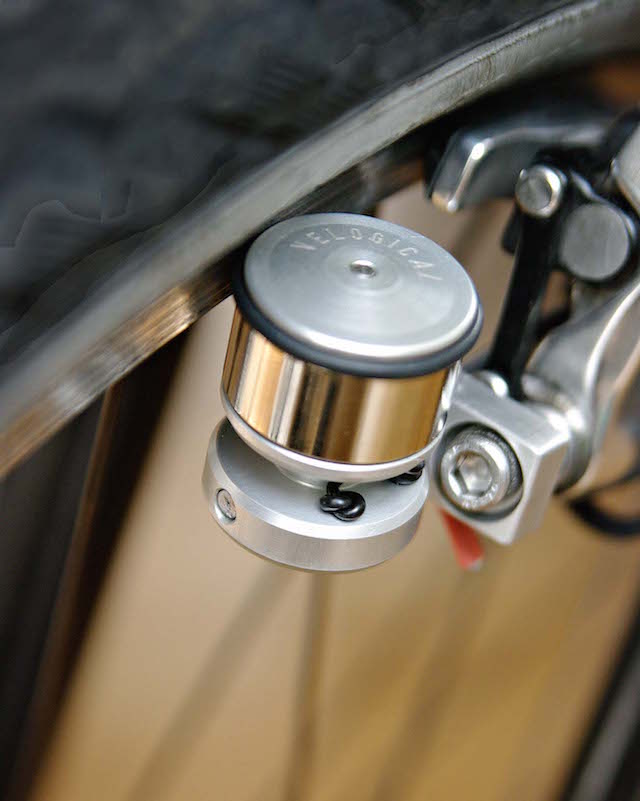 The VELOGICAL Dynamo is an extremely lightweight high end lighting power system for bicycles in a miniature form-factor. Its ‘hard skills’ are extremely smooth running (low drag) even at high riding speeds, minimal weight and high efficiency for use with modern LED bicycle lights. This dynamo genuinely weighs less than a mere 75 g! And it operates with minimal resistance, below the perception threshold. Thanks to highest electrical efficiency it supports passive safety in traffic while working as a daylight running light, too. This newly-patented dynamo lighting concept has been developed especially for the requirements of sports-oriented cyclists.

The VELOGICAL dynamo is a so-called rim dynamo, because it runs on the flat braking surface of the rim. This new design achieves optimal contact pressure thanks to a minimal contact patch. This enables this dynamo to achieve its remarkably powerful output. In doing so, it runs without wear on the rim wall, and can also be driven without problems on carbon rims. The internal mechanism of the VELOGICAL dynamo is practically wear free. It works slip-free and with unobtrusive reliability even in the wet.

The idea behind this product was to take advantage of the optimal location which the bicycle has to offer, from a dynamo drive point of view: The VELOGICAL dynamo rotates 20x faster than a hub dynamo, so it can be made correspondingly smaller and lighter. It rolls almost silently, turbine-style, on the rim. Using the latest magnetic materials, the VELOGICAL dynamo delivers the very best test results, both in the lab and in practice (assuming it’s fitted correctly of course). Efficiency levels are on average around 70%, and at 30 km/h higher than 70% – at 6 volts and 3 watts. And with the VELOGICAL dynamo, weighing a featherweight 75 g(!), you also save on the effort required to compensate for the approx of a heavy hub dynamo or 500 g extra weight of powerful battery lights.

And don’t forget: with a side-running dynamo, when not being used it can be disengaged entirely, while a slow and ever-turning hub dynamo is always operating, slowing you with its magnetic drag: a constant effect, even when the lights are switched off.

The VELOGICAL dynamo is not only highly energy efficient, but also universal compatible and retro-fittable. Cycle aesthetes and sports riders who want to appreciate the benefits of this next-generation dynamo-powered cycle lighting system can, it goes without saying, keep their carefully-selected high-tech wheelsets intact.

A rim with a braking surface.

Over-voltage protection built into the lamp.

As provided by most modern, certified LED cycle lights. The high efficiency of the VELOGICAL dynamo necessitates over-voltage protection, which converts excessive electrical energy harmlessly into heat (via so-called voltage suppressor diodes). In this aspect, the VELOGICAL dynamo has the same requirements of modern LED light technology as hub dynamos.

When combined with VELOGICAL-approved LED cycle lights, the VELOGICAL dynamo will demonstrate impressively just how much power lies within, delivering night-time illumination ideal for navigating unlit cycle routes even at high speed – and of course also for general safety purposes in traffic.

In combination with the additional overvoltage protector Shimano “SM-DH10A” every LED-Bikelight can be used.

Behind the development of the products shown above is the Cologne (Germany) based company VELOGICAL engineering GmbH. Was that not what you were expecting? VELOGICAL owner Dipl. Ing. Peter Frieden is by profession a developer of wind energy installations, in particular the wind certified turbine Easywind 6 for off-grid energy supply. These have earned the description “stormproof” because they can carry on producing power, unrestricted, even in a hurricane. Before that Peter Frieden directed the vacuum pump development department at Oerlikon Leybold Vacuum. His product developments, protected by numerous patent applications, have been successfully applied worldwide and are outstanding in both their high efficiency and in their reliability and low maintenance. Currently he is developing high efficiency special products to address as yet unsolved technical problems in cycling.

Seizing the initiative – the story of an innovation

When it comes to cycling, the VELOGICAL engineering GmbH team combines personal passion with the renowned cycling heritage of Cologne industrial region, with its flagship “Six Day Race” and “Tour of Cologne” on Easter Monday: Germany’s oldest cycle road race. Cologne has also been in the forefront of many aspects of energy and its transmission, not least because the world-famous Otto engine, still well known today, was developed here from 1876 onwards.

In the course of researching the product it became clear that the famous French constructeurs (such as Herse, Singer, Daudon) had already investigated rim dynamos in the early 1950s on their touring bikes, using various types of drive wheel. In 1980s, mountain bikers also investigated this system, because of the rough profile of off-road tyres and because heavy battery lights would not stay secure on the handlebars for long, especially over rough terrain. For battery lights, the mounting was the Achilles’ heel.

Overall, these earlier experiments with rim dynamos did not perform as well as was desired, because the fundamental problem of frictional resistance at high riding speeds had not been solved. To resolve this problem (high speed drag), simply moving the contact point from the tyre to the rim is not sufficient. Only a complete revision of the side-runner principle can achieve this, as demonstrated by the product shown here.