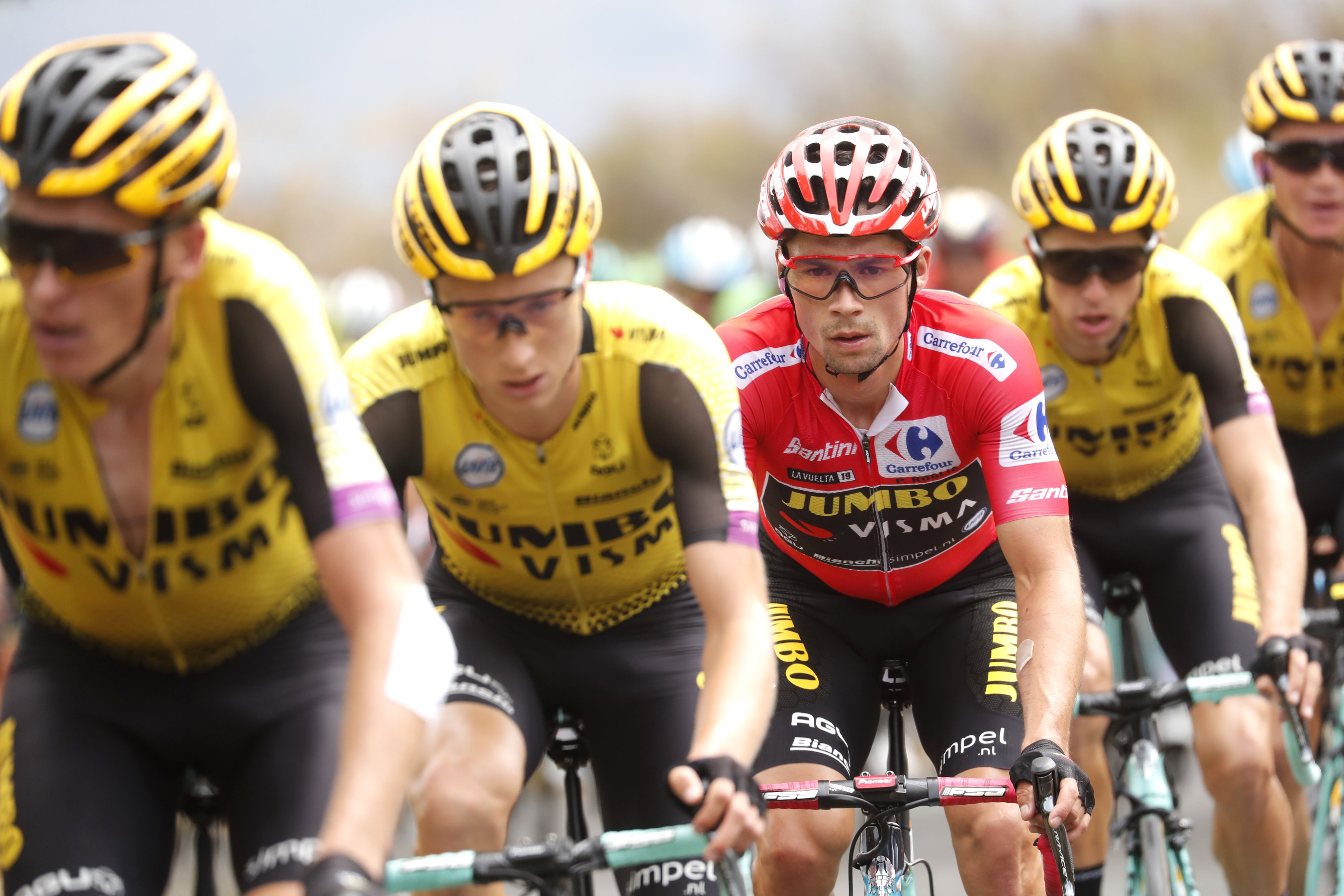 Tadej Pogačar (UAE-Team Emirates) made it three wins at the 2019 Vuelta a España with an outstanding ride on Stage 20. Meanwhile his compatriot Primož Roglič (Team Jumbo-Visma) provisionally confirmed the GC victory with another excellent performance, putting him in control ahead of the Vuelta’s arrival in Madrid on Sunday.

Slovenian youngster Pogačar soloed to win number three of the race on Plataforma de Gredos and at just 20 years-old he has undoubtedly been the breakthrough talent of the Vuelta this year. The UAE Team Emirates rider finished 1’32” ahead of Alejandro Valverde (Movistar Team), with Rafał Majka (BORA – hansgrohe) third.

Roglič has the GC win essentially in the bag with a 2’33” overall lead from Valverde, whilst Pogačar’s brilliant Stage 20 performance places him on the podium in third (2’55”)

Colombians Nairo Quintana and Miguel Angel Lopez crossed the finish a further 20 to 25 seconds behind and dropped to fourth and fifth in the standings.

Despite many attacks from López, the Astana Pro climber just could not match Pogacar’s efforts today and had to hand the white jersey to the young Slovenian rider, was until now the only rider to have won three stages in a Grand Tour before celebrating his 21st birthday.

With Jumbo-Visma’s Roglič having controlled his other rivals today, he retained the red jersey and is set to be the first Slovenian Grand Tour winner when the final stage concludes in Madrid tomorrow.

Roglič kept his cool and weathered a flurry of attacks to finish at the back of a select chase group to retain the red jersey ahead of Sunday’s final stage into Madrid. The 29-year-old Slovenian enters Stage 21 with a lead of 2’33” over the world champion Valverde.

Spanish veteran Valverde led the chase on Pogačar to preserve his runner-up spot on the general classification, out-kicking Rafal Majka (Bora-Hansgrohe) and Hermann Pernsteiner (Bahrain-Merida) for second place at 1’32”.

After a third stage victory in his maiden Grand Tour, Pogačar not only moved above Lopez in the white jersey youth classification, but bumped the 2016 Vuelta champion Quintana off the final podium.

Pogačar came within 22 seconds of Valverde on GC with Quintana dropping to fourth at 3’46” and Lopez fifth at 4’48”.

The first hour of racing was frantic as Astana alongside Movistar attempted to split the race on the Puerto de Pedro Bernard.

Jumbo-Visma stayed strong however, with Roglič’s domestiques doing an excellent job for the first 100 kilometers, keeping the peloton all together as they battled through a second consecutive day of poor weather.

During the second quarter of racing, a breakaway group managed to carve out a modest advantage over peloton along the 14 kilometer climb of the Puerto de Pena Negra.

Astana took the initiative yet again, deploying a full compliment of riders from the base of the climb in support of Lopez.

One by one they took there pulls until the bunch was sufficiently strung out and whittled to only the best climbers.

Lopez was the first to attack, but failed to eke out a gap. The pace lulled from there, prompting Pogačar to make his winning move.

The young Slovenian rider subsequently opened up a one minute lead with 4 kilometers to go, enough to virtually take the young rider’s jersey and edge closer to the podium.

Pogačar was first to crest the climb, carrying a 90-second gap down the descent, extending it by a further seven seconds as he hit the last 20 kilometers of racing.

From there, Pogačar’s gap continued to increase, earning the UAE”s a solo victory more than a minute and a half over his closest challengers.