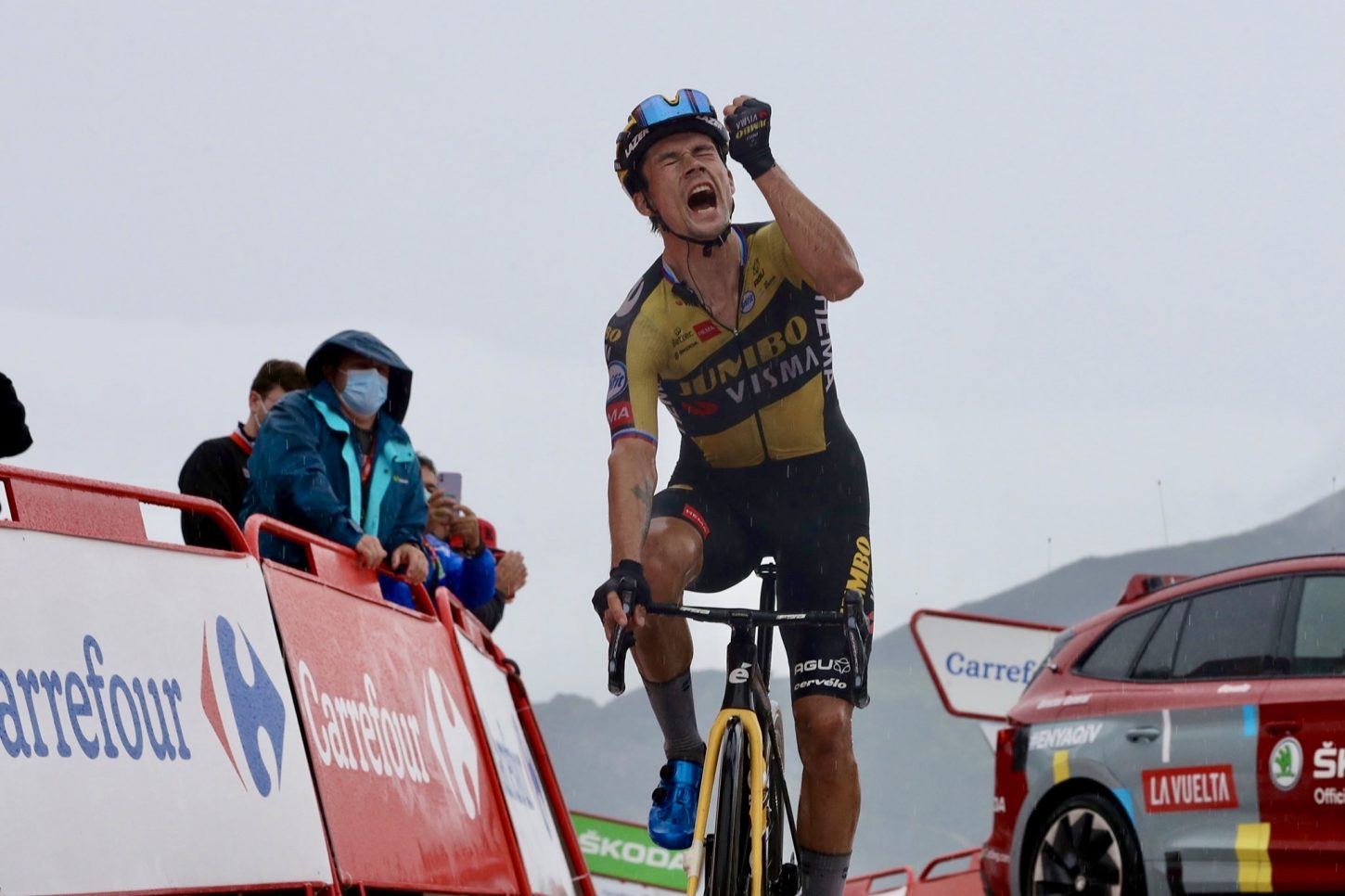 Primož Roglič (Jumbo-Visma) stormed to victory atop Lagos de Covadonga today, earning the defending champion not only the stage victory, but moving him back into the overall lead as well.

The Slovenian rider succeeded in dropping his breakaway companion Egan Bernal (Ineos Grenadiers) with just under 8 kilometers left in the climb, later reaching the summit more that a minute and a half ahead of his teammate Sepp Kuss, who was part of a chasing group that caught Bernal just shy of the final kilometer.

Meanwhile, Odd Christian Eiking (Intermarché-Wanty-Gobert) crashed along the descent of the Collada Llomena, only for the Norwegian rider to get dropped along the final climb of the Lagos de Covadonga, in the end relinquishing the Red Leader’s jersey to Roglič.

A blistering pace saw the riders cover 51.2km in the opening hour with a dangerous-looking eight-man breakaway featuring Michael Storer (Team DSM) and the American Joe Dombrowski (UAE Team Emirates) coming to nothing after being brought to heel on the Altu de Hortigueru.

After the peloton split twice on the approach to a dual ascent of the Cat.1 Collada Llomena, another move formed off the front with the likes of Dylan van Baarle (Ineos Grenadiers), Angel Madrazo (Burgos-BH), Fabio Aru (Qhubeka-NextHash), Michael Matthews (Team BikeExchange) and David de la Cruz (UAE Team Emirates) all involved.

But, after Mikel Landa (Bahrain Victorious) managed to bridge over with relative ease, Ineos Grenadiers came to the front of the pack in the form of Pavel Sivakov and Bernal. The duo tapped out a strong tempo as Eiking dangled off the back as the elevation peaked.

The breakaway was entirely swept up on the descent save for Olivier Le Gac (Groupama-FDJ) who managed to forge ahead to second ascent of the new Collada Llomena.

Sivakov and Bernal once again took the reins from the Jumbo-Visma train to stretch out the peloton, drop the red jersey, and swiftly end Le Gac’s foray off the front.

With 61km remaining, Bernal made a move which only Roglič and his teammate Kuss could follow – although the American soon dropped back to a chase group being paced by the Bahrain Victorious teammates of Jack Haig.

It was a brave move of Bernal to go so early, with former Tour and Giro winner forced to do all the riding while Roglič was content to sit in his wheel.

The duo went over the top with 55 seconds to play with before Bernal’s slight miscalculation on a corner was the sign of things to come on what had become a far more treacherous descent the second time round in the rain.

While chasing back, Eiking skidded on a slippery corner which had already seen Vlasov hit the deck hard along with a handful of other riders. While the Norwegian rider quickly got back on his bike, it was always a case of damage limitation from that point onwards.

In the meantime, Bernal and Roglič stretched their lead to 2:10 towards the final climb – although some hefty pacing from Bahrain’s Wout Poels, Damiano Caruso and Gino Mader saw the gap come down to 1:30 ahead of the mythical 12.5km climb, which was being used for the 22nd time in Vuelta history.

The leaders maintained that gap but the balance of power shifted from Bernal, who started to look tired. The Slovenian then kicked clear with 7.5km remaining.

Behind, there were attacks from Lopez, Yates, Mas and even Kuss as Bernal was eventually reeled in while Roglič continued powering on through the mist towards victory and the red jersey.

A single punch to the air and a resounding “Yes!” was all Roglič could muster as he took the win, 1:35 before his teammate Kuss led home the eight-man chase group.

After a solid ride from his Bahrain teammates, with Mader finishing in that group to rise into the top 10 on GC, while Haig kept alive his hopes of a podium finish.

The Australian rider is in fourth at 3:46, 30 seconds clear of Martin. Bernal, Yates, Kuss, the Austrian Felix Grossschartner (Bora-Hansgrohe) and Mader complete the top 10.