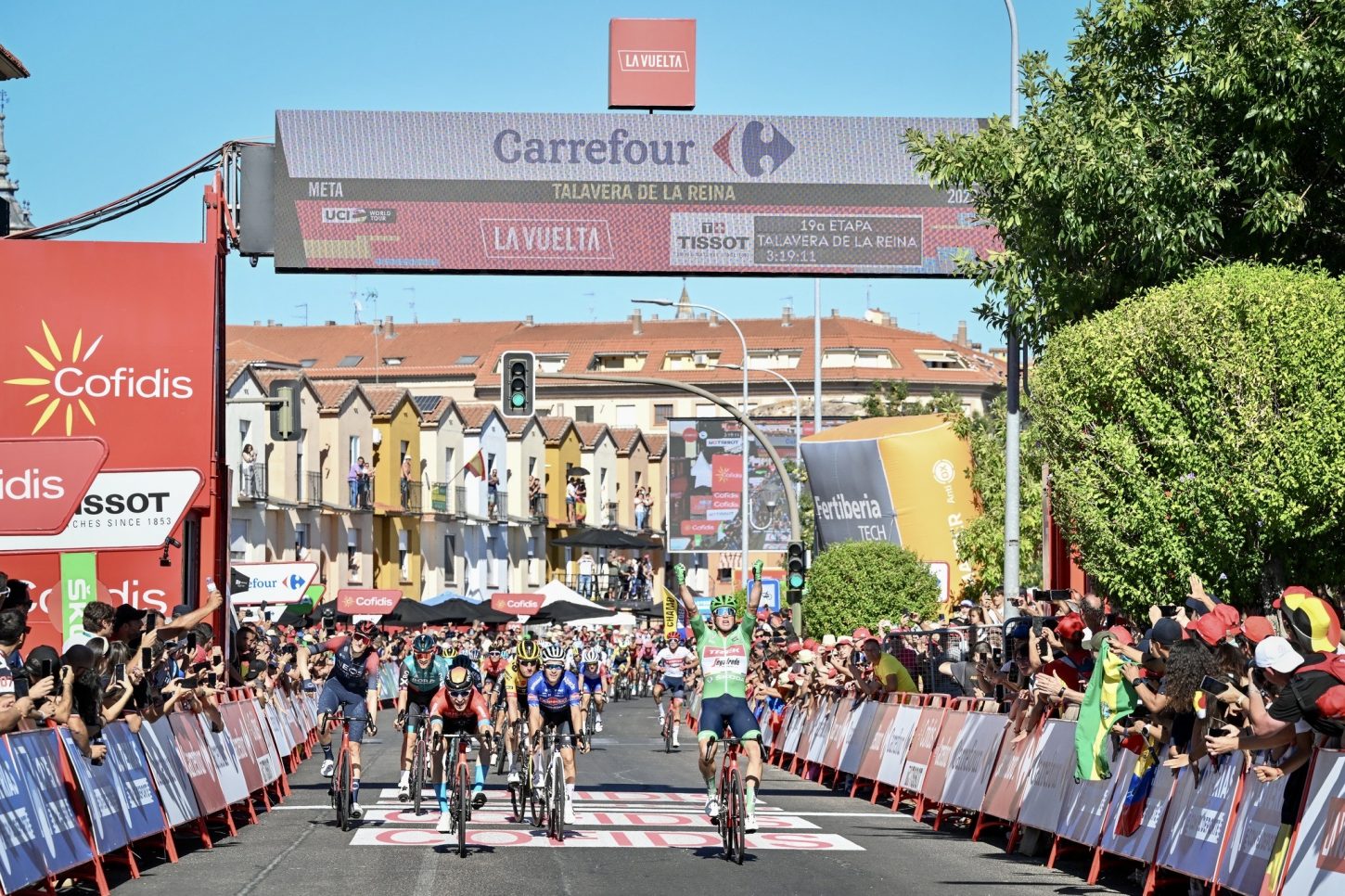 Mads Pedersen claimed his third stage win in this year’s Vuelta a España today, easily sprinting to the victory in stage 19 in Talavera de la Reina.

The Danish rider capitalized on a  two-man lead-out train to launch himself around the final corner to comfortably take the stage win ahead of Fred Wright (Bahrain Victorious) and Gianni Vermeersch (Alpecin-Deceuninck) in a reduced bunch sprint.

Pedersen’s Trek-Segafredo squad was in control of the race for much of the stage, which took in two second-category climbs before a long descent and flat run-in to the finish. Having helped bring back the day’s break with 50km to go, they came to the fore once again in the final to deliver Pedersen to triumph.

Trek-Segafredo had control of the 55-man peloton heading into the final kilometer, though Miles Scottson (Groupama-FDJ) threatened to upset with a late solo attack. That was no problem for Pedersen, though, who launched at 175 metres to go and never looked back.

Wright, who had picked the right wheel to follow, managed to get into the wind and looked to come alongside Pedersen in the closing metres. However, he never had enough to pull alongside fully or nudge past. Vermeersch took third but was never in the picture for the stage victory, while Ben Turner (Ineos Grenadiers) and Mike Teunissen (Jumbo-Visma) took third and fourth further back.

Meanwhile, Remco Evenepoel (QuickStep-AlphaVinyl) remains in the race lead with an advantage of 2:07 over Enric Mas (Movistar).

Brandon McNulty (UAE Team Emirates), Ander Okamika (Burgos-BH) and Jonathan Caicedo (EF Education-EasyPost) formed the day’s move inside the first half an hour of racing, with the American Lawson Craddock (BikeExchange-Jayco) setting off ahead of the first climb in a bid to bridge over.

Craddock crested the summit around 40 seconds down on the leaders, while secondary attempts to ride clear of the peloton by Euskaltel-Euskadi duo of Mikel Bizkarra and Ibai Azurmendi came to nothing, as well as a long-range effort from Chris Harper (Jumbo-Visma).

With 80km remaining, Craddock sat up and slipped back to the peloton. A fierce chase from Trek-Segafredo then ensured that the three leaders were brought to heel at the start of the second ascent of the Puerto del Pielago, a 9.3km climb at a gentle gradient of 5.6%.

Richard Carapaz (Ineos Grenadiers) pocketed the maximum five KOM points over the summit to move onto 50 points – double the tally of his nearest challenger for the polka dot jersey,Enric Mas.

Save for a last-ditch attempt from Miles Scotson (Groupama-FDJ) in the last kilometer, the finish produced no surprises as Pedersen zipped home to deny Wright what would have been a poignant first professional win.

To make matters worse for the 23-year-old Wright, his latest near-miss came just minutes after Primoz Roglic went public and blamed the Bahrain Victorious rider for causing the crash that ended the defence of his crown earlier in the week.

Pedersen extended his unassailable lead in the green jersey standings over Wright to 207 points, with Sunday’s final stage in Madrid offering the former world champion an opportunity to win a fourth stage in what has been a highly memorable Vuelta debut.