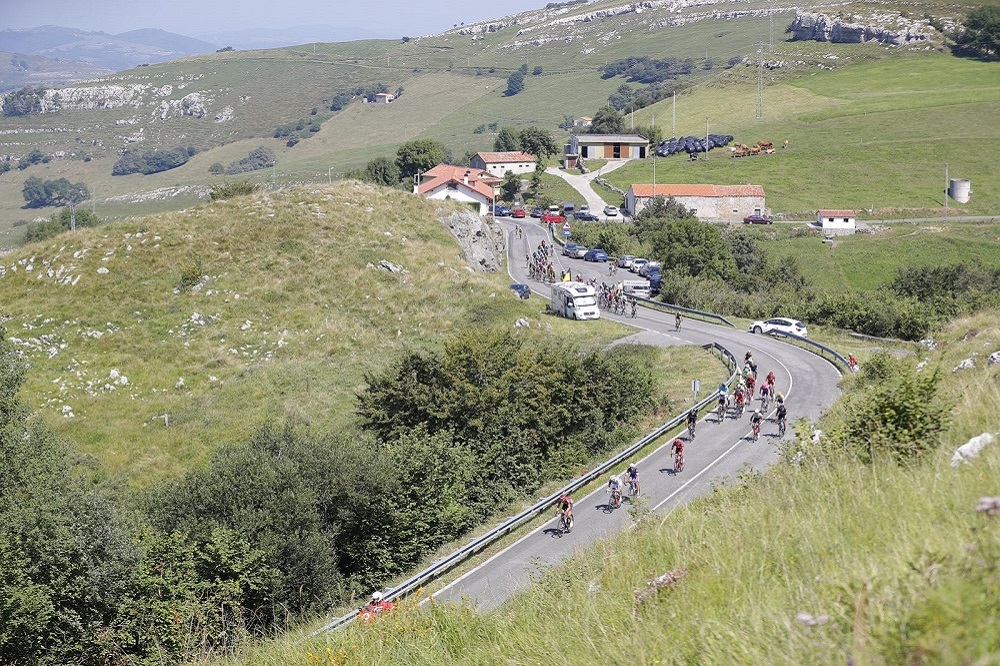 Jens Keukeleire (Orica-BikeExchange) took his first Grand Tour stage victory when he came out on top in a reduced bunch sprint on stage 12 of the Vuelta a Espana today.

After four consecutive summit finishes, the riders faced another tough stage when they tackled the 193.2km from Los Corrales de Buelna to Bilbao on stage 12. After a flat start, the riders hit a category 1 climb at the 30km mark and then there was another category 3 climb to tackle before flat roads led to Bilbao. In the end, the riders did two laps of a 28.5km circuit that included the steep Alto El Vivero (4.2km, 8.5%) just 12.9km from the finish. From there, it was a downhill and flat run to the finish.

In a fast and aggressive race, Keukeleire dug deep to make it over the steep Alto El Vivero and then launched a long sprint to clearly beat Maxime Bouet (Etixx-QuickStep) and Fabio Felline (Trek) in the final dash to the line. Despite an attack from Alebrto Contador (Tinkoff), there were no changed to the top of the GC.

Nairo Quintana finished safely in the bunch and so retained his lead with a 54-second advantage over Chris Froome (Sky). He will try to stay safe in tomorrow’s stage which is another very hilly affair.

After a relatively flat start, the riders will tackle four category 3 climbs in quick succession. The final top comes with 50.2km to go and from there, the riders will follow lumpy roads to the finish in Urdaz.

Jens Keukeleire outpowered a peloton depleted by the hills of a long 193.2-km ride to Bilbao to hand his Orica-BikeExchange team their second stage victory in the Vuelta on Thursday. The 27-year-old Belgian surged in the final stretch to outsprint France’s Maxime Bouet (Etixx-Quick Step) and consistent Italian Fabio Felline (Trek-Segafredo) to the line on a day when the leading favourites had declared a ceasefire. Colombia’s Nairo Quintana retained his red jersey.

Countless attempts took place in another nervous start of the race (44 kph in the first hour) until a group finally emerged. The 1st category Puerto de Alisas (1st cat, km 49) was ideal for a breakaway and seven riders took advantage of it. Among them was a former red jersey holder, Darwin Atapuma (BMC), two revengeful riders, Gianluca Brambilla (Etixx-Quick Step) and Louis Meintjes (Lampre-Merida), ambitious Frenchmen Kenny Elissonde and Romain Hardy, as well as two Chris Froome team-mates, Peter Kennaugh and David Lopez, who was first at the top of the ascent. While France’s Florian Senechal (Cofidis) abandoned with stomach problems, followed by Fabrice Jeandesboz (Direct Ednergie), Atapuma crashed in the descent and was forced back into the bunch. At the back, the peloton, led by Movistar, maintained the gap under 2:30.

50 km from the finish, the pack raised the tempo and Hardy, then Lopez, were dropped on the first ascent of the 2nd category Alto el Vivero (Km 151), which saw Kenny Elissonde collect the KOM points. The leading bunch regrouped in the descent but to no avail as the main bunch, led by Alessandro Vanotti and the rest of the Astana team, was back within 20 seconds at the first passage on the line (km 165). With 18 km to go, the attempt was quashed.

The second ascent of Alto de Vivero saw Dries Devenryns (IAM Cycling) go on his own while the race favorites stayed together. Andrey Zeits (Astana), George Bennett (Lotto NL-Jumbo), Mathias Frank (IAM Cycling) and Matvey Mamykin (Katusha) chased behind the Belgian but were reined in after a brisk but vain attack by Alberto Contador (Tinkoff) one kilometre from the summit. Devenyns reached the top with a 30-seconds lead over the peloton, led by Movistar’s Dani Moreno and by Bennett.

But the Belgian, already close to victory in stage 9 at l’Alto de Naranco, was pulled back with 2 km to go, leaving the door open to a bunch sprint. While some strong finishers were left in the peloton, Keukeleire jumped with perfect timing to surprise the rest of the pack and hand his team their second stage win after the one taken by Simon Yates in stage 6. Bouet and Felline had to be content with the podium places.