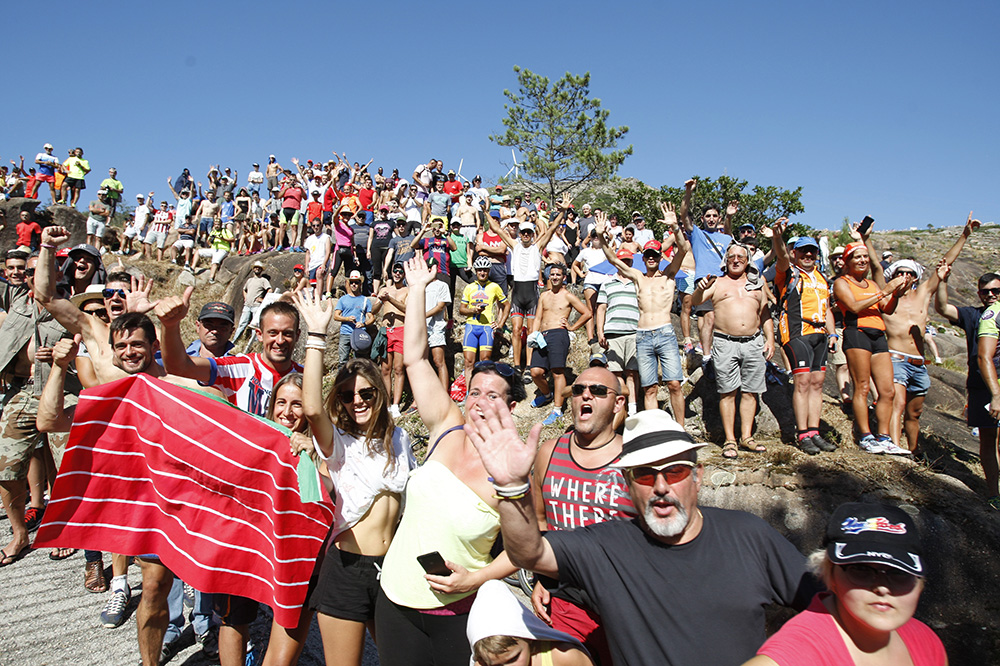 Simon Yates (Orica BikeExchange) claimed a solo victory in the Vuelta a Espana today, after the young British rider attacked during the waning moments of the stage to seize his first ever Grand Tour victory.

Race leader Darwin Atapuma had an eventful day, which saw the BMC rider retain his grip on the overall race lead.

The Orica-BikeExchange rider made his move from the main peloton along with Dani Moreno (Movistar) during the short sharp unclassified climb just 4 kilometers from the finish.

Yates proceeded to ride clear of his breakaway companion only half a kilometer later, just as Ben Hermans (BMC) was bridging his way across.

Despite the peloton sitting only 20 seconds or so behind, there didn’t look to be a concerted chase effort taking place amongst the GC teams, and the group behind Yates looked to be struggling to keep pace as well.

As a result, Yates was able to hold off the chase by more than 20 seconds to take the stage honors in Luintra.

From there, the group went on to establish a maximum advantage of 2:30 over the peloton.

At one point, Fraile tried his luck with a long range attack, pursued by Bakelants, Frank and Zeits, but struggled to hold on to any advantage after taking the day’s KOM points.

After Fraile was caught, Frank commenced a subsequent attack – with 19 kilometers to go.

However, Frank’s move lasted until Yates and Moreno countered, with the Swiss rider unable to stay on terms with his rivals as the peloton continued to gain ground during the final kilometer.

Yates easily dispatched Moreno during the closing moments of the stage to seize the win.

In the meantime, there were no significant changes in the general classification, with Darwin Atapuma (BMC) holding on to his lead, though Yates moved up to tenth overall with his team leader Esteban Chaves still in fifth, while fellow British riders Chris Froome and Peter Kennaugh of Team Sky are in third and eighth respectively.

Simon Yates made the best of the tremendous work by his Orica-BikeExchange team throughout the 163.2 kilometers of the 6th stage of the Vuelta to surge in the last three kilometers and earn his best victory to date in Ribeira Sacra. The Briton, overshadowed by twin brother Adam in recent seasons, caught Swiss Mathias Frank (IAM), the last man out of a 11-man breakaway, to win on his own, ahead of Luis Leon Sanchez (Astana) and Fabio Felline (Trek Factory).

Robert Kiserlovski (Tinkoff) and Sebastien Minard (AG2R – La Mondiale), involved in yesterday finale crash, did not start stage 6 from Monforte de Lemos, where the peloton paid homage to the victims of the earthquake in Italy with a minute of silence. Several attempts took place from the gun and the pace was too high for Tour de Suisse winner Miguel Angel Lopez (Astana). The Colombian, who broke two teeth in a stage 3 crash, called it quits.

The group split in the ascent of the 2nd category Alto Alenza, the only classified climb of the day. Last year’s king of the mountain Omar Fraile went on his own and took his lead close to three minutes with 50 km to go while his former companions Zeits, Bakelants, Frank, Didier and Losada kept chasing 1:20 behind him. Losada, who missed a turn, and Didier were later dropped.

Aberto Contador’s Tinkoff team-mates took over from Orica-BikeExchange at the front of the bunch, quickly followed by Alejandro Valverde’s Movistar, who seized the reins in the twisted finale, which saw Lotto-Soudal’s leader Bart De Clercq crash heavily.

Zeits, Bakelants and Frank caught Fraile 19 km from the line and Frank seized his chance to attack on the junction. Bakelants and Zeits were caught 5 km from the finale as Dani Moreno (Movistar) and Simon Yates surged to chase behind Frank. The Briton caught the Swiss and dropped him with three kilometers to go, going on to clinch his most prestigious victory to date, a month after the end of a four-month doping ban. Darwin Atapuma (BMC) retained his overall lead.