What is the Sport of BMX? 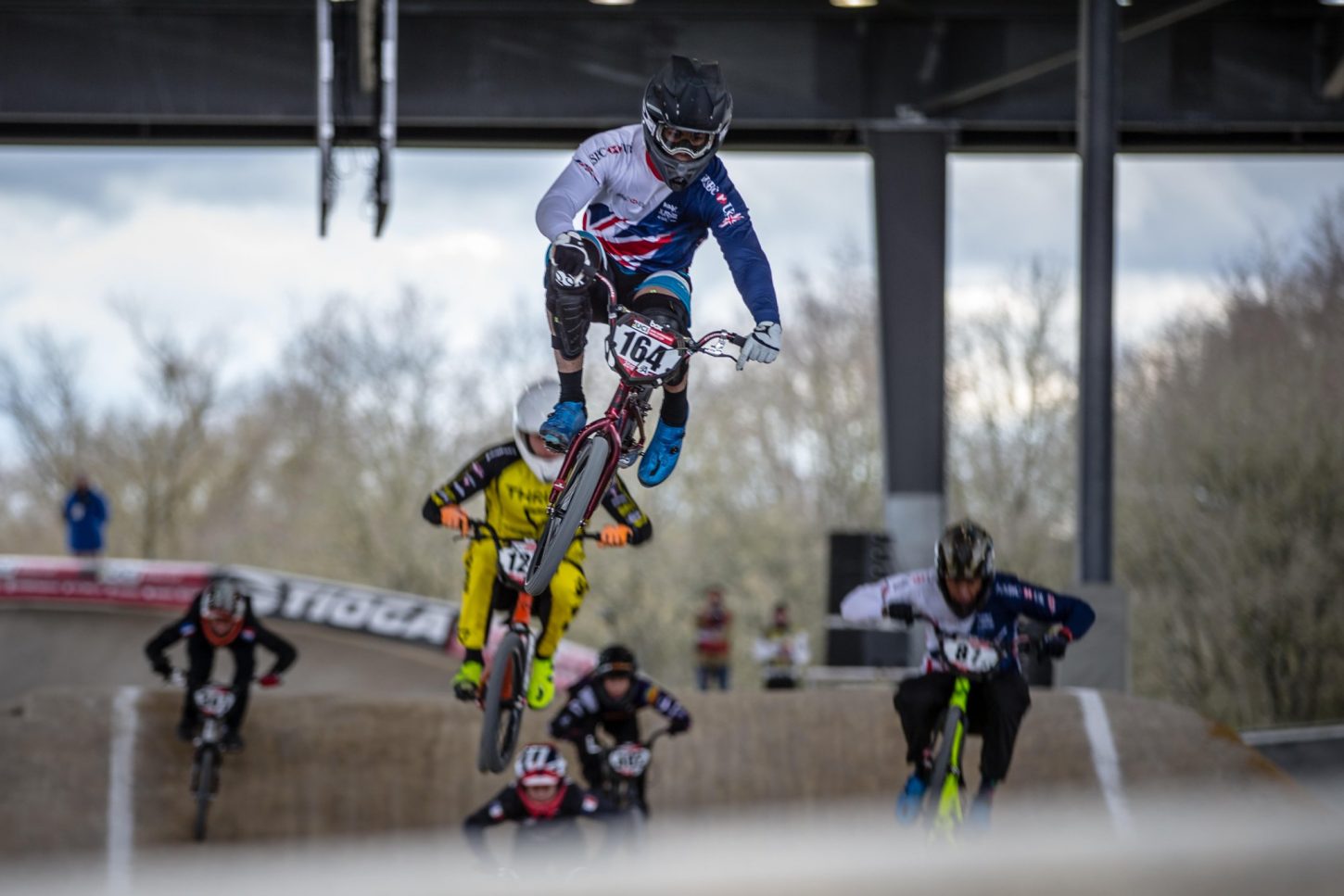 BMX stands for Bicycle Motocross, a term derived from the longer-established sport of dirt racing on motorbikes. If someone says they ride BMX, it could mean one of several different things. Without a second thought, riders from the two major disciplines, BMX Racing and BMX Freestyle, use the term ‘BMX’ to describe what they do. The easiest way to explain this is to divide BMX into its two major parts: Racing and Freestyle. Let’s look at their similarities and differences.

BMX Racing is a short-distance, full-gas, elbow-to-elbow sprint race from the start hill to the finish line via bumps, jumps and turns. The design of each race track varies, with a combination of big, technical and small jumps, as well as banked turns. The bikes are lightweight, single-gear and aluminium-framed with rear brakes and 20-inch wheels: they’re set up for acceleration and speed, so they’re stiff, stable and nimble.

BMX Freestyle is ridden on bikes that look similar at a glance but that on closer inspection differ in many ways from those used in BMX Racing. They’re tougher, usually chromoly framed, to withstand the hard-hitting riding style – and brakeless or with rear brakes only. But like BMX Racing bikes, they’re single-gear with 20-inch wheels.

In BMX Freestyle, doing tricks is what counts: this is about performance, rather than speed! There are a number of Freestyle disciplines: Park, Flatland, Dirt, Miniramp, Street, Vert, and Big Air. Both Park and Flatland are now governed by the UCI.

Freestyle is a judged sport, but outside of competition, many riders consider BMX Freestyle a lifestyle – less about chasing points, more for personal pleasure. Learning tricks, creating videos, building ramps, doing road trips and having a good time are integral to BMX Freestyle. The difference between Racing and Freestyle may be significant, but the common ground is the fun of riding those 20-inch-wheel bikes.

While BMX Racing has been an Olympic discipline since Beijing 2008, BMX Freestyle Park will make its introduction to the Olympic Games at Tokyo 2020. Thanks to its integration into the UCI, a structure has been formed to get BMX Freestyle Park ready for the next Games. The Olympic qualifying process started on 1 November of 2018 and will end on 12 May 2020: in this timeframe riders can score qualifying points for their nation to be present in Tokyo. The number of riders at Tokyo will not be huge – with nine men and nine women due to compete in BMX Freestyle Park – but the impact from the discipline is expected to be enormous. The UCI Urban Cycling World Championships and UCI World Cup events offer the majority of qualifying points but competitions such as the National Championships and Class 1 events also count towards the Olympic Qualification Ranking.

After several National Championships and C1 events earlier this year, the first round of the 2019 UCI BMX Freestyle Park World Cup took place in Hiroshima, Japan, on 19-21 April. The BMX Freestyle Olympic Qualification Ranking will be interesting to follow as we get closer to May 2020 when Olympic qualifying ends. The highest ranked nation in both Men’s and Women’s competition will get to send two riders to the Olympic Games. Strong nations in the Men’s category are Australia, Russia, USA and Great Britain, while individual riders from Venezuela, Croatia and Costa Rica are very much in the mix. Germany was strongly represented in the Women’s Park competition in Hiroshima, as was host country Japan.

Australia’s Brandon Loupos gave an incredible winning run in the BMX Park Finals in Hiroshima, giving an indication of where BMX Freestyle Park is heading and what is possible to achieve in the 60-second time limit: double backflips, a cashroll, 1080 spins, flair 540s, frontflips, 900 spins on the quarter-pipe, 360-double flips going backwards on the box jump, flipwhip over the spine…

The USA’s Hannah Roberts grabbed the 1000 UCI points available by winning the Japanese round of the BMX Freestyle Park World Cup. The level of women’s riding is increasing quickly and the number of entries in Japan is an indication of the sport’s growth in this category.

So, if someone says they ride BMX, your next question should be: Racing or Freestyle? They may be two different worlds, but they are close siblings. Both have now made it to the Olympic Games, and both feature their own dedicated professional riders with team support. If you’re tempted to give BMX a go, step one is getting a BMX bike, then you can figure out which scene suits you best: BMX Racing or BMX Freestyle. Both are good choices, so give it a go, stick with riding and have fun.