Are We Witnessing the End of a Trade Show ? 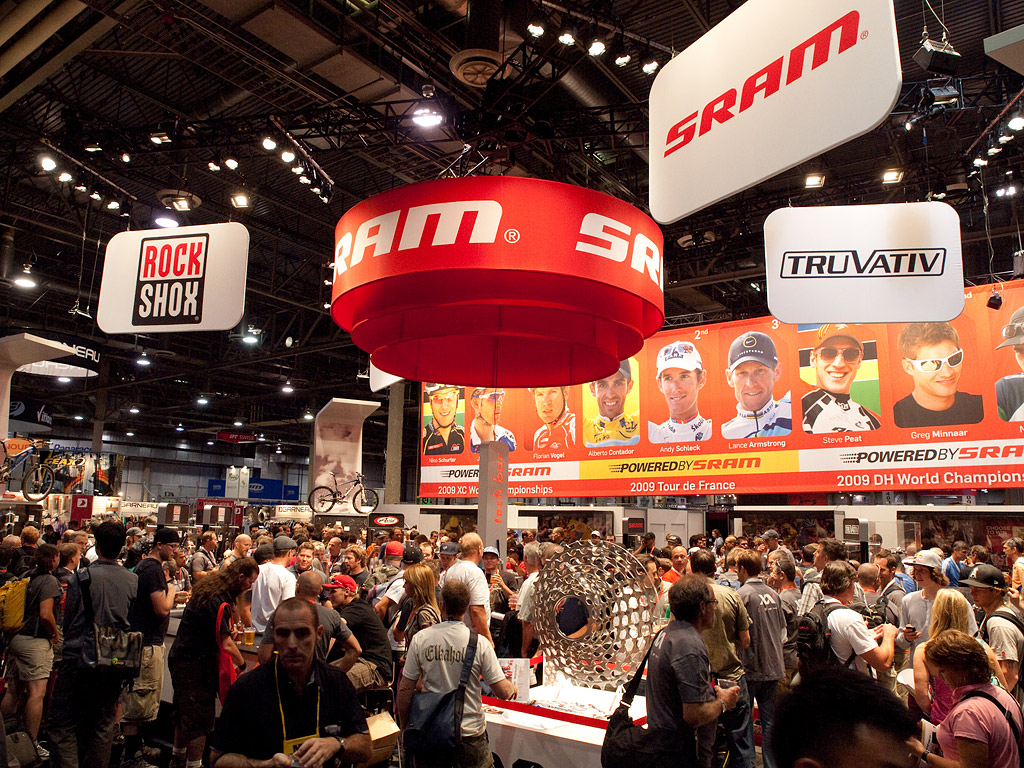 I was standing next to a long time bicycle industry manager…looking down one of the aisles in the main lobby outside the Interbike display floor at Noon Wednesday September 21, the first day of the largest bike industry trade show in North America that from a crowd standpoint looked like the last day…when he said quietly, almost to himself said ”…are we witnessing the end of a trade show?”

Beckendorff interviewed Pat Hus, the Interbike Vice President & Show Director who is quoted as saying: “Are we are happy with this year’s show? No. But if you ask me if it could be worse I say, definitely yes,” and went on to say, “Interbike reflects the negative factors the whole country and the industry is faced with now.”

Beckendorff relied on what he refers to as “…first forecasts” that predicted overall attendees dropping by 10 to 12 percent over last year and exhibit space being down by 8 percent. Beckendorff does point out that “…last year’s Interbike was space-wise the largest ever.”

However these 2016 Interbike attendance numbers were confirmed in a September 28, 2016 article by Steve Frothingham that appeared on the online Bicycle Retailer And Industry News (BRAIN) website.

The BRAIN article references the Interbike Show spokesman Justin Gottlieb as saying the “…organizers expected lower numbers in part because of Interbike’s upcoming Fall CycloFest, which is scheduled for Oct. 20-23 in North Carolina. Many East Coast retailers sent smaller crews to Las Vegas this year and will send others to the North Carolina event, Gottlieb said. CycloFest includes trade-only and consumer days, including demos.”

Frothingham confirmed that “several East Coast retailers have told BRAIN they chose to skip the Las Vegas show altogether this year to try out the new East Coast event.”

It is logical that part of the decline in Interbike Show attendance in Las Vegas is attributable to the new Fall CycloFest event in North Carolina about a month later, October 20 through 23.

But in addition, Jo Beckendorff quotes Pat Hus as pointing out: “Interbike reflects the negative factors the whole country and the industry is faced with now.”

Beckendorff follows this comment by Pat Hus with: “On the one hand these factors are rooted in a deep overall uncertainty and no positive feeling all over the country.

According to several Interbike visitors this is a result of the current political situation with the upcoming presidential election. Generally it is said that the country is ‘missing leadership’. And that this loss is not only politically but also business-wise, including in the US bicycle business where nowadays everybody is doing its own thing.”

The BRAIN article briefly confirms this by pointing out: “At the annual Industry Breakfast that opened the show on Wednesday, Interbike’s vice president, Pat Hus, said 2016 has been one of the most challenging years he’s seen in his decades in the bike industry.”

We think Hus may be overstating the impact of the current political season in America on the Interbike Show, but the economic conditions and the “challenging” situation the American bicycle business and the bike shop channel have, and will continue to go through are, we think very relevant to attendance at the Interbike Show. Essentially…some bike shops could not afford to go, others could not justify the expense – and others simply no longer have a reason to be in attendance.

I personally have attended American and International bicycle business trade shows for the better part of the last 48 years, and the Industry Breakfast at this years Interbike stood out for three reasons.

First is the admission from the podium in the opening remarks that 2016 “…has been one of the most challenging in years.” While this is an absolutely true and accurate statement – it is unusual that it was acknowledged right out of the box. It was also unusual that the decline in bicycle riding participation was recognized in the same statement.

Second is the panel that immediately followed the opening remarks and presentations by two of the three sponsors – the National Bicycle Dealers Association (NBDA) and the Bicycle Product Supplier Association (BPSA).

No articles that we know of have yet to appear about the September 21 Panel: How does the pro tour help cycling? However, for the first time ever I received phone calls and emails from folks I know in the bike biz prior to the Interbike Show expressing both surprise and concern about this topic. You have to view this in the context of my world that is populated with mostly people like me who are of the opinion that the pro tour is of little or no help to the American bicycle business relative to actually reversing the slow decline in bicycle riding participation and assist in growing the market and the bike business.

The panel moderator was the executive director of peopleforbikes, the third sponsor of the September 21 morning event. The moderator did a first rate job and the panel members were articulate and spoke clearly and stayed on the questions asked by the moderator – but some of the retailers at my table clearly realized the disconnect between the opening remarks about 2016 being a challenging year and the obvious leaning of the panel to show that the pro tour does help bicycles and bicycling in America, but as one retailer said “…where’s the beef?”

This leads to the third reason this year’s Industry Breakfast at Interbike stood out to me – and that is The 20Collective Industry Coffee and Discussion September 22 at 8:00 am the next morning. Charlie McCorkell, the owner of Bicycle Habitat and a member of the 20Collective delivered a PowerPoint presentation of the statistics that factual define the brutal truths of declining new bicycle unit sales, flat to declining bicycle riding participation data and the declining relevance of bicycles and bicycling over the last 15-years.

Here is what the official Interbike Show Directory said about the 20Collective on page 27: “The 20Collective is a group of 20 thought-leader retailers who have invested their own money to start a revolution – a revolution focused on saving their business and yours.” Wow! This is heavy stuff – and McCorkell in his presentation provided the detail to the opening remarks made a day earlier by Pat Hus.

This is the first time the Interbike Show itself has presented the brutal truths, all of them, and the statistical facts underpinning them, along with the support of 20 “thought-leader retailers” who are saying: …enough is enough…now let’s start a revolution focused on saving our bike shop businesses and yours!

What the 2016 Interbike Show didn’t present – or actually challenge the statuesque with…were solutions! Show management and its circle of sponsors and supporters may have thought the ebikes some in the establishment wish would lead the American bicycle business out of the wilderness like this category has in Europe are a solution – but there was no discussion or structured series of dialogs about actual solutions to the brutal truths that were exposed and then peeled back and laid bare at Interbike this year.

I have no reason to believe that the new Fall CycloFest event in North Carolina October 20 through 23, 2016 will produce any solid solutions either. However the number of companies exhibiting and the number of attendees will be of interest as they will be additive to the Las Vegas totals to yield a national number for Interbike exhibitors and attendees for 2016.

Was I witnessing the “…end of a trade show” September 21? No, I don’t believe so. What I was witnessing was a trade show in transition as it attempts to reposition itself to meeting the needs of a bicycle business that is in the process of changing, with some industry players and participants being dragged kicking and screaming – and others leading the charge as change agents!

The Show has already spoken the brutal truths out load to all that will listen. The real question going forward is – will Interbike focus on real solutions?