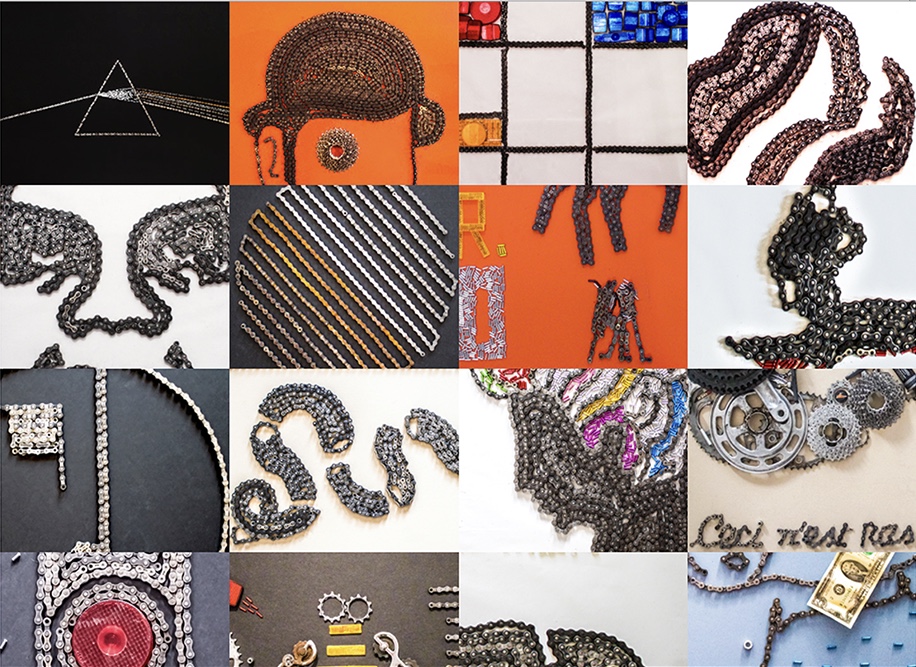 1: A bicycle with at least one part dangling off and/or duct tape holding the bike together.

2: A bike that makes others aware of your impending arrival by the volume of the squeal coming from the petrified brake pads or lack there of.

3: A Huffy or Murray mountain bike with three broken spokes and a shift lever unattached.

For one-hundred consecutive days, in an effort to bridge my two passions, I re-imagined iconic works of art solely out of scrapped bicycle parts. What resulted was a runaway viral internet sensation.

Started by renowned graphic designer Michael Bierut, 100 Day projects are an exercise in discipline and creativity. Michael has said “It’s easy to be energized when you’re in the grip of a big idea. But what do you do when you don’t have anything to work with? Just stay in bed? I’ve always had a fascination with the ways that creative people balance inspiration and discipline in their working lives. The only way to experience this kind of discipline is to subject yourself to it.”

I took Michael’s challenge and used it as an opportunity to brand myself as a designer and cyclist. For years I found that in the bike world I would frequently be speaking about the value of design, while at the design office I became a transportation advocate. I wanted something that bridged these two worlds, and 100 Hoopties became that bridge.

Being highly resourceful is a skill that has always set me apart from others. This project in particular was an exercise in making do with what you have, and in that special things happen. You begin to let go of perfection and embrace the imperfections. It was critical to make quick decisions while working on Hoopties because there simply wasn’t time to noodle a design for hours. In the end, 100 Hoopties was as much a design challenge as it was a personal challenge to face my fear of perfection.

Almost immediately, the project took off like a rocket when Maria Popova from Brain Pickings featured it on her blog. Over the course of the project, the website received 25,000 unique visitors and was published by over 100 media outlets worldwide.

The thing people fail to mention about going viral, was how managing the media, licensing contracts and requests for interviews becomes a full time job on its own. Over a year later, the project is still being published and shared around the web.

I am a Detroit native, University of Arizona alumna, graduate of Debbie Millman’s Masters in Branding program, and currently call Los Angeles home – where I weave through the lanes of design and strategy on my bicycle as a visually obsessed coffee snob.

It’s been one year since I graduated from the School of Visual Arts in New York City. This past year has been my most successful, and I am a better designer, developer and strategist by a multiple of ten.

Highlights include a transportation safety campaign strategy and key art illustration for the City of Santa Ana, the launch of two prestige beauty brands with complex executions, and continued publication of the ever viral project 100 Hoopties.

My career path looks more like a squiggly doodle than a straight arrow, but I have loved every stop along the way. This rollercoaster has gone through the entertainment industry, in-house corporate design, transportation advocacy, branding for cities, and the competitive sports world.

I enjoy discovering what makes a brand tick and unifying its message in the simplest language to amplify its reach. I will never stop learning and I continue to look forward to enriching dedicated creative teams.

Outside of the office, I am a dedicated cyclist and freelance designer within the bicycle industry. Every March since 2008, I have strapped on my cycling cleats and pedaled the 150 miles from Los Angeles to the AIGA Y-Conference in San Diego, for fun.