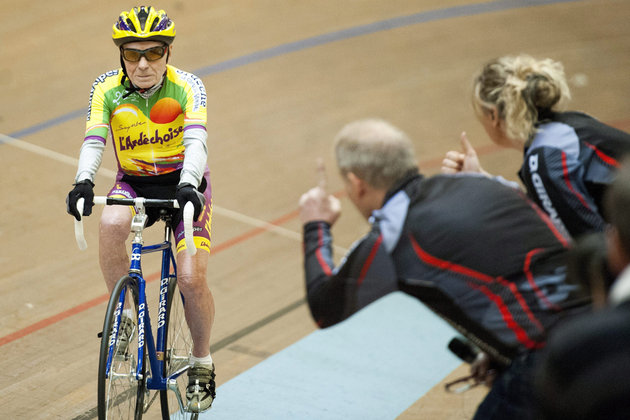 On February 17th of last year, at 100 years-old, Robert Marchand travelled to the World Cycling Center in Aigle, Switzerland, and rode 24.251 kilometers in an hour – setting a new record .

On September 28th he was at it again, heading to the Parc de la Tête d’Or Velodrome in Lyon and riding 300 laps. He covered the 100 kilometer distance in four hours 17 minutes 27 seconds, again setting a new standard.

In his typical modest fashion, Marchand said, “I feel like a guy who is a hundred years old, I feel good. I’m an ordinary guy,” he said then. “I rode a bike for 52 years, it is not new today.”

Born in 1911, Marchand started cycling at 14 years of age, then later left France and lived in Canada and Venezuela. He worked as a fireman, market gardener, show salesman and wine dealer, and competed as an amateur boxer. He returned to cycling in 1978 at 67 years of age, building up the distances and training with riders who were far younger than he was.

He finally retired from work at 89 years of age and around that time rode the Bordeaux-Paris event. He covered the 600 kilometers in 36 hours. More recently, he’s limited the distance, although he still does a considerable amount. “For the last five years I have decided not to go for rides of more than 100km,” he said in February of last year, when he lay down an age-related hour record of 24.251 kilometers.

He explained his key to life, and fitness.

“I am lucky that I haven’t had any major health problems. My advice to anyone, young or old, is to keep moving. I do ‘physical culture’ every day. It works out my whole body and keeps me supple.

“Some people when they reach 80 years old, start playing cards and they stay immobile. Not me. I’ve never been able to keep still…”

Marchand’s extraordinary physical shape has captivated the attention of many, not least the scientists at the Inserm public research institute. They study him every three months, and are impressed by what they see.

“They told me I had the constitution of a 55-year-old man, they think it’s genetic,” he told Reuters last year. “I have never deprived myself of anything: not wine, not food, not women, but always with moderation.”

Prior to setting the 100 kilometer age record last September, he was asked if he would use any performance-enhancing substances during his attempt.

“The only doping for me is water with a spoonful of honey that I put in my canteen – that’s it,” he answered then, before joking, “if I was doping, though, maybe I could hit 35 km/h.”