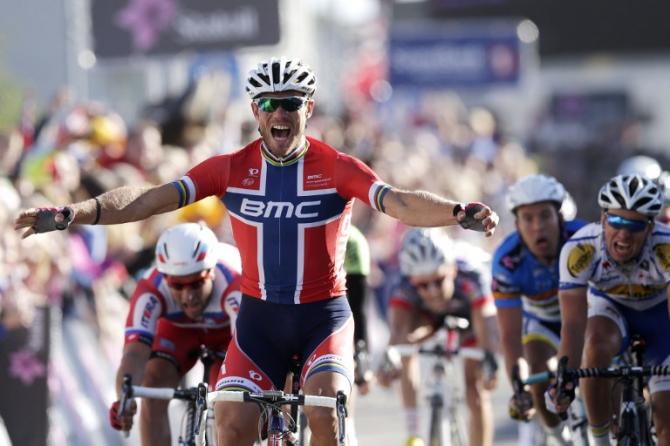 With a maximum deficit of 2.40 at half way into the race, the peloton led by Vacansoleil-DCM’s team-mates of stage 1 winner Kenny van Hummel kept the situation under control. Several teams combined at the front to bridge the gap, Argos-Shimano, BMC and Team Plussbank being the most notable of them. All the way, the race was a thrill for the senses due to the beauty of the environment and the popular support. Thor Hushovd gave an indication of his strength when he followed an acceleration by Europcar’s Vincent Jérôme who was later involved in a crash that affected Nordhaug with 13.5 kilometers to go.

At the front, Korner, Olsson and Downing refused to give up and insisted 13km before the finish. As soon as they got reined in at the 7km to go mark, Amund Grondal Jansen (Plussbank) tried his luck, so did Paul Martens (Belkin) three kilometers further. But a bunch gallop was inevitable. Adam Blythe delivered Hushovd in a perfect position. Norway’s cycling superstar took the command 200 meters before the finishing line and collected his sixth victory of the 2013 season. He leads the overall classification with an advantage of three seconds over Van Hummel and four seconds over Helven who became the best young rider.