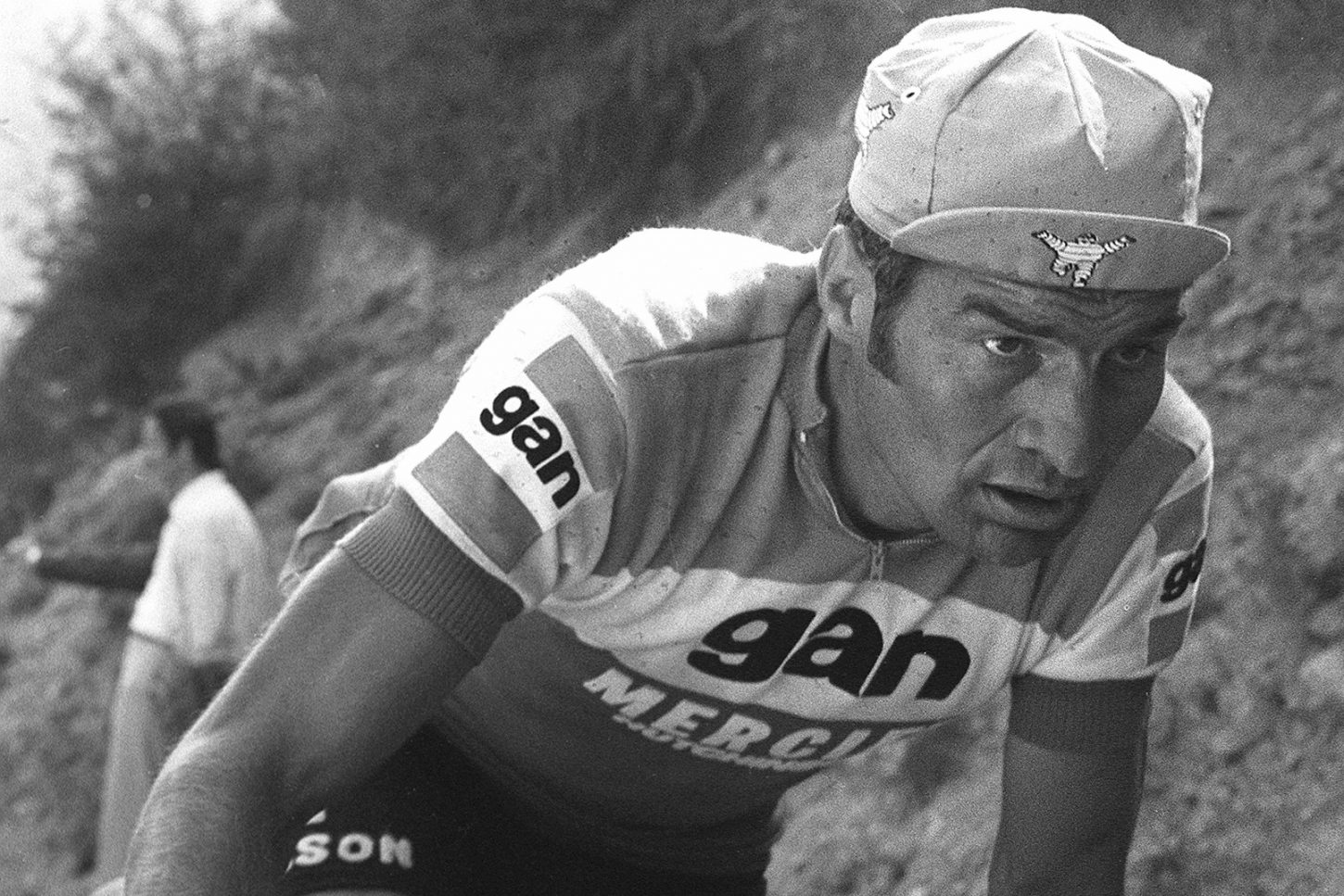 The French rider is best known for bursting onto the professional racing scene in 1961, after winning the French National Road Championships and the Milan-San Remo Classic.

These victories were later followed up by winning the 1963 Fleche Wallone Classic and his first and only Grand Tour title, the 1964 Vuelta a Espana.

Nicknamed “Pou Pou” by French fans, Poulidor was especially loved not because of his big race successes, but rather by his unyielding determination to ride-out from under the shadows of such luminaries as Jacques Anquetil and Eddy Merckx.

Indeed, this underdog position may have been the reason Poulidor became such a favorite of the cycling masses, later earning him but another nickname, “The Eternal Second”, because he never won the Tour de France despite finishing in second place three times, and in third place five times (including his final Tour at the age of 40).

Poulidor was the son of Martial and Maria Poulidor, small farmers outside the hamlet of Masbaraud-Mérignat,France, where he began working at a young age.

The need for working hands on the farm meant he left school at 14 even though he wanted to continue his studies. Outlets for a young man in his region during this time were often limited to village fairs and local bicycle races.

Poulidor rode his first bike race at the urging of André Marquet, who ran a cycle shop in nearby Sauviat-sur-Vige. Marquet took Poulidor to his first races by motorcycle.

Success on a local level came quickly and Poulidor added the money he won, which he said could be considerable at the time because the crowd put up prizes all through the race, to the family’s income.

Poulidor acquired his first racing license at the age of 17, after joining the La Pédale Marchoise Team in La Forêt-Montboucher, finishing seventh in his first race.

The young Poulidor later competed in the regional round of a national youth competition called the Premier Pas Dunlop.

However, the series fell in the middle of the harvest season, which allowed him only to train at night after working 15 hours in the fields.

He raced that circuit for three years as an amateur, once beating the famous Louison Bobet.

Conscription would later sideline Poulidor’s racing aspirations, particularly after the French army sent him to Algeria, where he worked as a military driver, subsequently gaining more than 25 pounds due to lack of exercise.

However, in 1960 Poulidor resumed his racing career, losing the excess weight in about a month’s time.

Following military service, Poulidor won his first race by as much as six minutes over his closest rival.

He later finished second in the GP de Peyrat-le-Château, winning 80,000 francs, which he calculated to be more than what he would have earned in six years working on the farm.

“No race, however difficult, goes on as long as a harvest,” he once remarked.

Poulidor was discovered in 1959 by another French rider, Bernard Gauthier, who took notice of the young neo-pro during that year’s Bordeaux–Paris.

“That day, I lapped him, I took four laps out of him, even though it was a very difficult circuit. He was very impressed:, said Gauthier.

This in turn prompted the well-known directeur sportif and former pro, Antonin Magne, to offer Poulidor a spot on his prestigious Mercier Team at a salary of 25,000 francs a month.

However, as legend has it, Poulidor asked for 30,000, but Magne refused saying it was more than what he was paying his other top riders like Gauthier and Louis Privat.

But, after realizing that he had a promising rider in Poulidor who was capable of challenging Anquetil, he later agreed.

Perhaps, the most memorable scene from that year’s La Primavera occurred when Poulidor punctured halfway through the race and lost two minutes. Magne insisted that he chase back, later catching back up with the peloton along the famous climb of the Capo Verde with 20 kilometers to go.

He recovered fast enough to counter an attack by Jean-Claude Annaert, catching both him and the Dutch rider, Ab Geldermans, who had won the previous year’s Liege-Bastogne-Liege.

After executing a final attack which served to drop both of his rivals, Poulidor opened up an advantage of 20 seconds at the summit, which was enough to claim the race honors by three-seconds ahead of Rik Van Looy of Belgium

While a good climber, Poulidor had a hard time matching Anquetil’s prowess as a time trialist, often having victory snatched from him by losing valuable time to his fellow French rider during the Individual Time Trial (ITT) events in the Tour de France.

Poulidor’s riding style was aggressive and attacking, whereas Anquetil preferred to control the race during the mountain stages and ITT’s.

However, much to the ire of Anquetil, Poulidor’s undeterred spirit made him the darling of the French public, which was even more enhanced by his working-class upbringing and Limousin accent that contrasted greatly with Anquetil’s northern background and sharper speech. Moreover, Poulidor’s face was deeply tanned and furrowed, while Anquetil had high cheekbones, a smoother face and meticulously groomed hair.

Poulidor’s best chance of defeating Anquetil came in the 1964 Tour de France, where he rode alongside his arch-rival up the Puy de Dôme. Both riders were so exhausted during the last few hundred meters, Poulidor was able to take nearly enough time to threaten Anquetil’s lead in the general classification.

The Tour organizer, Jacques Goddet, recalled there being as many as half a million spectators lining the climb that day, and described the rivalry as, “Anquetil rode on the inside by the mountain wall while Poulidor took the outer edge by the precipice. They could sometimes feel the other’s hot gasps on their bare arms. At the end, Anquetil cracked, after a battle of wills and legs so intense that at times they banged elbows.”

Poulidor later recounted, “I was so tired that I had no memory of us touching”, although photographs that have since become historic clearly show that they did.

Anquetil eventually clinched the overall victory by 55 seconds, after gaining enough time during the ITT on the final day.

However, Poulidor’s close defeat to Anquetil only bolstered his popularity with the French. “The more unlucky I was, the more the public liked me and the more money I earned”, he said.

The end of the Anquetil era presented new opportunities for Poulidor to finally win the Tour de France. However, ongoing injuries from 1967 and 1968 prevented him from achieving his goal.

The following year saw the arrival of cycling legend Eddy Merckx, who’s performance was so unrivaled, it left Poulidor with little chance of beating the Belgian powerhouse, though he did offer much resistance.

In 1970, Louis Caput was brought-on as the deputy directeur sportiff of the Mercier Team, who in turn brought on Bernard Sainz to practice homeopathic treatment for its riders.

In his fictional writing, Jaques depicts “Mabuse” as a criminal mastermind who becomes rich through hypnotic powers. He plots to take over the world but is foiled by the police. From his cell, he masterminds criminal plots by writing endless gibberish.

Prior to joining the Mercier Team, Sainz was involved in horse racing, where he was twice convicted of maltreating horses and repeatedly investigated by police, which led to his conviction of illegally practicing medicine and incitement to doping.

As story has it, Louis Caput approached Edmond Mercier, the bicycle-maker behind Poulidor’s team, asking to bring Sainz into the team management. Mercier agreed, mainly because he was already being treated by Sainz for his own health problems.

Poulidor initially decided against racing for the 1971 season, but relented to Sainz’s urgings. This proved to be a good decision on Poulidor’s part, as he went on to win the Critrium National and the Setmana Catalana de Ciclisme.

In Paris-Nice, Poulidor was trailing Merckx by 22-seconds on the morning of the last day. But, a blistering attack along the Col de la Turbie saw him wrest the leader’s jersey from Merckx and seize the overall victory.

Poulidor went on to win Paris-Nice for the next two seasons, but a terrible crash during the 1973 Tour de France left him with long-term effects.

Indeed, Poulidor crashed so horrifically along the descent of the Col de Portet d’Aspet, he could be seen crawling his way out of a ravine with the help of race director, Goddet.

Many viewed this incident as being extremely impactful to Poulidor’s career, who struggled with pain from that day onward, although he still managed to claim a spot on the podium during the 1974 and 1976 Tour de France.

Poulidor retired from racing after the 1977 season.

Since then, he has written several biographies, was made a Chevalier de la Légion d’honneur and has worked in public relations for one of the subsidiary sponsors of the Tour de France. He also has a bicycle brand in his name, which are made in Loire region of France.

Poulidor lived with his wife Gisèle in Saint-Léonard-de-Noblat, east of Limoges during his last years.

Indeed, Mathieu van der Poel went on to become cyclocross world champion as both a junior and elite rider, later bridging his way to road racing during the last couple of seasons where he’s racked up some impressive victories in One-Day races.