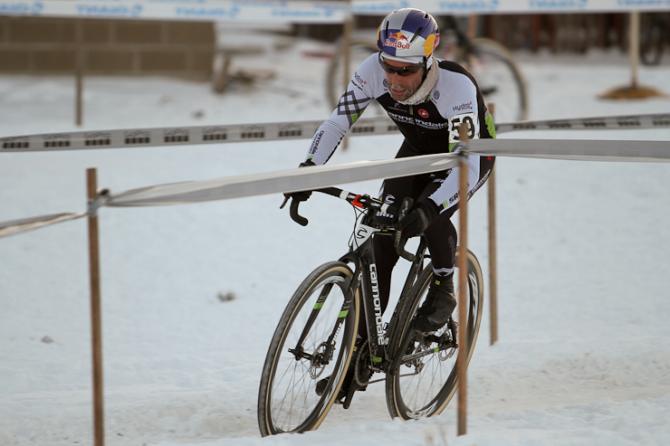 “I enjoy the technical part,” Johnson said. “It’s always a test. You have to go as fast as you can without going too fast, so it’s a finesse thing and you kind of find these lines. But like everyone else out there – I’m sure – I crashed a couple of times and I scared myself a couple of times.”

Canadian rider Geoff Kabush set a powerful first lap pace – that only Yannick Eckmann could follow. Johnson trailed just a little ways behind about halfway through the opening lap, with Ben Berden right behind him. Other pre-race favorites, including Bend resident Ryan Trebon,  Jeremy Powers and Jamey Driscoll, were bunched up in traffic and still fighting their way to the front.

As Eckmann started to fade off Kabush’s pace at the front, Johnson was clawing his way back to the leaders, first catching Eckmann and then dropping the Cal Giant rider. He caught Kabush a lap later and surged ahead of him as they passed though the start/finish about a third of the way through the race.

“Geoff was riding so fast at the beginning of the race that it was really tough to get him,” Johnson said. “And then once we were riding together, I was just trying desperately to get around him. He was flying.”

Once past Kabush, Johnson pressed the pace for the first third of the next lap and established what would eventually be his winning gap. Kabush chased Johnson by himself throughout the remainder of the race but could only get within 20 seconds of the winner by the finish.

Behind the two leaders, Eckmann continued to fade and dropped to sixth as Driscoll and Trebon poured it on. Powers, with his entire face covered with a mask, started to warm up and was also slowly moving forward. The series leader had just enough juice to get past Trebon by end of the race, finishing fourth behind Driscoll, 1:40 off Johnson’s pace. Trebon settled for fifth, another 14 seconds back.

After the race, Johnson praised the spectators who braved the cold to come out and watch the race, and he noted that the riders weren’t the only people at the venue looking for clever ways to beat the cold.

“I saw some groups of people who would go to their car and then come back out, then go to the car and come back out every time I was coming around,” he said. “It was awesome, awesome riding out there. So much fun.”

“I was OK in the race, and it just kind of hit me now,” she said. “That was epic. Just very challenging.”

Nash powered away from the field during the opening lap, with only Crystal Anthony able to follow.

Weather in Bend dipped below zero overnight and barely climbed into single digits by the time the women started at 2:15 for their 40-minute race. The cold weather and snow from the preceding days left the the course in several inches of snow.

Nash covered five laps of the frozen course in 38:40, with Crystal Anthony trailing in 25 seconds later. The Optum rider kept the pressure on Nash throughout the race, but wasn’t able to close the gap on her smooth and steady opponent.

“The whole race she rode really well,” Nash said of Anthony. “She did really great back there where it was technical and twisty-turny. It was kind of getting more slippery in a couple of those corners, so I definitely had to focus a lot.”

The two leaders were followed across the line by Elle Anderson at 39:10, Rachel Lloyd at 39:20 and Meredith Miller at 40:34. Kaitlin Antonneau finished sixth, more than two minutes off the lead pace.