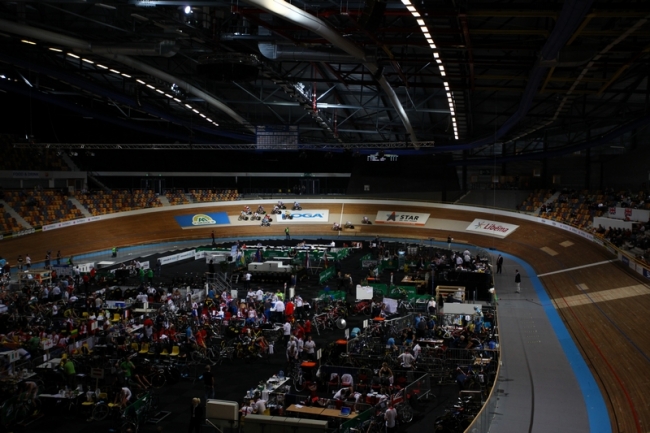 Great Britain secured two bronze medals on the second day of competition at the European Track Championships in Apeldoorn, with Olympic champion Jason Kenny taking bronze in the men’s sprint and Jess Varnish finishing third in the women’s event.

London 2012 gold medallist Kenny qualified in eighth place in the 200m time trial with a time of 10.230 but he slowly gained momentum on his fellow competitors as he made it to the semi-final. Unfortunately for Kenny, he lost to Robert Forstemann, with the German eventually taking silver in the final.

After being left to fight it out for bronze with Forstemann’s compatriot Stefan Botticher, the 25-year-old Bolton rider fought back to beat the German in two straight races to seal a place on the podium and the bronze medal. The event was eventually won by Demetriev of Russia.

Jess Varnish had already picked up one bronze at these championships after finishing third alongside Becky James in the women’s team sprint the previous day. Varnish qualified in 11.374 just two hundredths faster than Victoria Williamson who set a time of 11.399. After both riders made it safely through the early rounds they met each other in the quarter-finals where Varnish comfortably earned her place in the semis, leaving Williamson to battle it out in the race for 5-8 place.

Varnish lost to home rider Elis Ligtlee in the semi-final but won both races in the minor final against Virginie Cueff of France to collect her second bronze in as many days. Williamson finished seventh overall after her ride in the 5-8 place final. The event was eventually won by Vogel of Germany.

The day also saw British Cycling Olympic Podium Programme athlete and 2012 gold medallist Laura Trott in action in the omnium, fresh from her triumphant ride in the women’s team pursuit the previous evening.

At the halfway point she sits third, despite crashing in the elimination race and confirming later on Twitter that she required medical attention.

"Stitches in my leg not the finish I was hoping for on day 1 but onto the next day #bikeracingforyou," she wrote.

Sam Harrison is currently sixth in the men’s omnium after a strong start saw him sit in third place after the flying lap and points race but a 16th in the elimination race saw him drop down the order.

Today will see the second day of the omnium for both men and women as well as both men’s and women’s keirin events. The end of day three and the conclusion of the event will be marked by the men’s madison. We will be bringing a round up from each day’s action in the Netherlands.

Women omnium – classification after race i

Men omnium – classification after race i