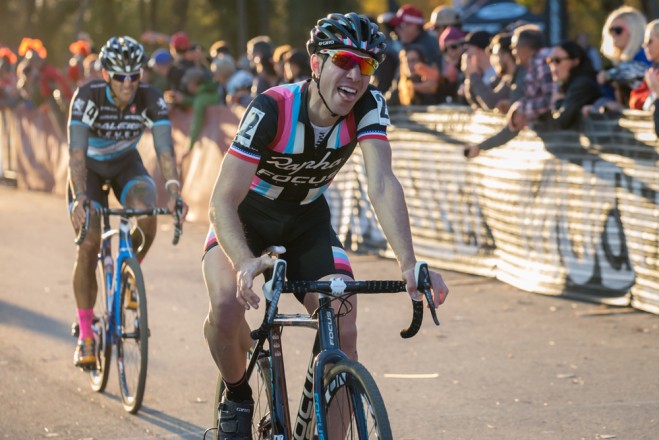 Today’s race saw Berden, Summerhill, Ryan Trebon and Adam Craig off the front for most of the race. However, in the final lap or so, Tim Johnson and Powers managed to bridge the gap.

From there, a six man battle ensued. And, at one point, it appeared as though Trebon was once again poised for victory. However, the Raleigh-Clement rider fell during one of the final off-camber corners. Powers then seized the opportunity and accelerated toward to the finish.

In the women’s race, Katie Compton once again swept the field –  with Elle Anderson and Meredith Miller finishing in second and third place.

Today’s race began with Amanda Miller taking the hole shot. However, by midway into the first lap, Compton simply powered away – and was gone for good.

Both of the California/Giant riders – Anderson and Miller – worked together for awhile trying to catch Compton. But, at one point Anderson rode clear of Miller.