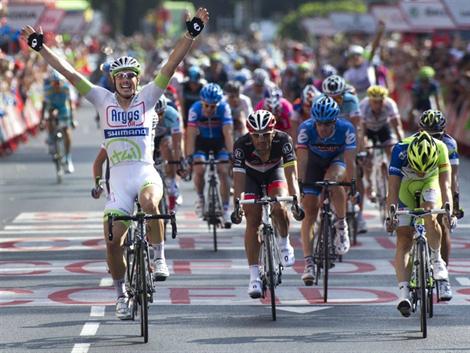 Despite plenty of wind, the race was a relatively controlled affair – that saw a 6-rider breakaway get clear early in the race. With riders like Lieuwe Westra and Pavel Brutt out front, the peloton had to work hard to neutralize the escape inside the final 10 kilometers.

Indeed, it all came down to the expected bunch sprint where Degenkolb proved  to be the strongest rider. Today’s victory marked the German rider’s third win in less than a week – following his two stage wins in the Tour de l’Eurometropole. The win is also a continuation of a fantastic week for his Argos-Shimano team – as Degenkolb’s victory comes just two days after Reinhardt Janse Van Rensburg’s win in Binche-Chimay-Binche.

The 63rd edition of Paris-Bourges partook of a 190.3 kilometer route that started in Gien and finished in Bourges. The course was mostly flat with only a few small climbs along the way.

A four rider breakaway group containing Lieuwe Westra, Tim Mertens, Julien Duval and Bryan Coquard, occurred at the outset of today’s race.  And, at one point, the escapees managed to create a gap of 1:45 over the main peloton. Duval initiated a small attack of his own – picking up KOM points in the process – before slipping back into the escape group.

In the meantime, the escapees continued to increase their gap over the field – ultimately stretching it 2:25. However, Pavel Brutt, along with Sebastien Delfosse, decided to chase. And, by the 114 kilometer to go mark, the duo successfully bridged themselves to the four man breakaway group. However, the main peloton was now behind by 4:40.

At the 20 kilometers remaining mark, the peloton began to chase in earnest – bring the gap down to around 3 minutes. Meanwhile, Mertens fell off the pace in the escape group and was a lone chaser for quite a while before being absorbed by the peloton.

The peloton continued to show difficulty in maintaining an effective pursuit. And, at the base of the Cote du Graveron – a group containing Thomas Voeckler, Alexandre Pichot, Clement Koretzky), Marco Marcato, Guillaume Levarlet and Laurent Pichon attacked with great intensity.  However, their move was immediately countered by the main field.

In turn, the peloton began to increase it’s efforts – and by the 35 kilometer mark, the gap was reduced to a manageable 30 seconds. Jeremy Bescond made an unsuccessful attempt to get across, and was quickly absorbed by the group.

On the next climb, Coquard and Delfosse fell off the pace while David Le Lay attacked and quickly caught the fading escapees. However, they were all eventually caught by the peloton – being lead by  Bretagne.

The peloton continued it’s fierce pursuit of the remaining front trio – with a gap continuing to hover around 30 seconds.

However, with 4 kilometers to go, everything came together – with Voeckler initiating a final attack to no avail. Degenkolb took the sprint victory.