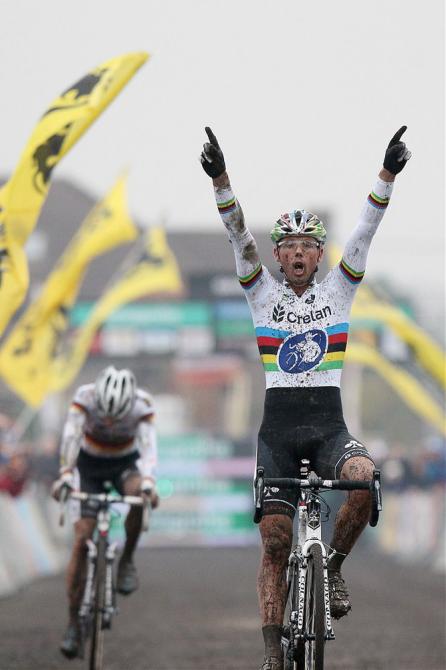 Despite having a bad start, the World Champion rode his own pace during most of the race –  until he found himself in the lead with Walsleben. Nys then launched a blistering acceleration on the final climb – seizing the win.

However, not everything went well for Nys today. Indeed, he was initially dropped in the first few laps of today’s race. Worse, in addition to desperately trying to bridge himself to the lead group, the World Champion at one point was left watching his main rivals like Klaas Vantornout, Niels Albert, Philip Walsleben and Lars van der Haahr continue to ride clear. However, given the long distance of today’s race, Nys managed to gradually make his way to the lead group.

Once Nys made contact with the main group, Walsleben subsequently initiated an attack – quickly opened up a gap of his own. In turn, Nys continued his steady pace until he finally caught Walsleben. However, despite several attacks from Nys, the German rider was able to stay onboard – until they reached final climb to the finish.

At that point, Nys proved to be too strong for his rival – as he made a fierce attack on the climb that Walsleben could not respond to.

Today’s victory extended Nys’ his lead in the Superprestige series to 7 points ahead of Albert and Vantornout who are tied in 2nd.

Belgian champion Sanne Cant won her third straight race in the last seven days – as she soloed to victory at today’s Superprestige event in Gavere.

Today’s race saw Harris escape from the field early in the race. However, she was caught by Cant in the third lap. The Belgian champion kept up the pace – and steadily rode away from Harris. A mechanical failure on the final lap for Harris – provided Wyman the opportunity to pass her and seize second place.

"This is a victory I had not expected," said Cant. "This is a very difficult course where I was never great in the past. On the more technical passages I could make up time and uphill I was always a bit quicker than my rivals.

"This race is proof of my good, basic condition, even for this amount of time," continued Cant.

"The jury apparently miscalculated, because we were well over 40 minutes."