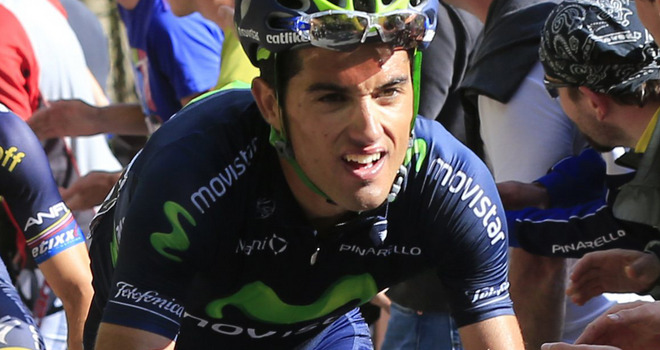 Benat Intxausti won stage 4 of the 2013 Tour of Beijing in a summit finish atop Mentougou Miaofeng Mountain today – thwarting a last moment challenge from Daniel Martin.

Intxausti finished three seconds ahead of Martin, and in doing so the Spanish rider was awarded a ten second bonus for his summit victory that gave him the overall race lead as well. The previous race leader, Nacer Bouhanni, fell back considerably on the lower slopes of the final climb – moving him way down in the overall general classification.

Today’s stage was decided on the climb to Mentougou Miaofeng Mountain – as a sizable group of riders moved into position on the lower slopes. Orica GreenEdge was the first team to launch an attack. However, it was team Movistar who really took the initiative in setting the pace – in order to set up their man – Intxausti.

At this point, Daniel Martin, along with Ivan Basso, Rui Costa and Robert Gesink began to move toward the front.

It was Martin who was the first to engage an attack – riding clear in the final 5 kilometers – in pursuit of Dombrowski et al.  However, the Irishman was caught, along with the lingering trio.

In the final 2 kilometers, a group of 12 riders had moved into the front, to include David Lopez and Jan Bakelants. However, Martin still remained at the front – doing the majority of the work.

In a moment of hesitation on the part of the peloton, Intxausti seized the opportunity to attack – accelerating with under 2 kilometers remaining.

Rui Costa, Lopez, Martin and Bakelants pursued in earnest in the remaining 500 meters – with only Martin able to muster a final attack. However, the Irishman did not have the impetus to catch Intxausti in the final 50 meters.