Touriste Routiers – In an Age of Color Part One 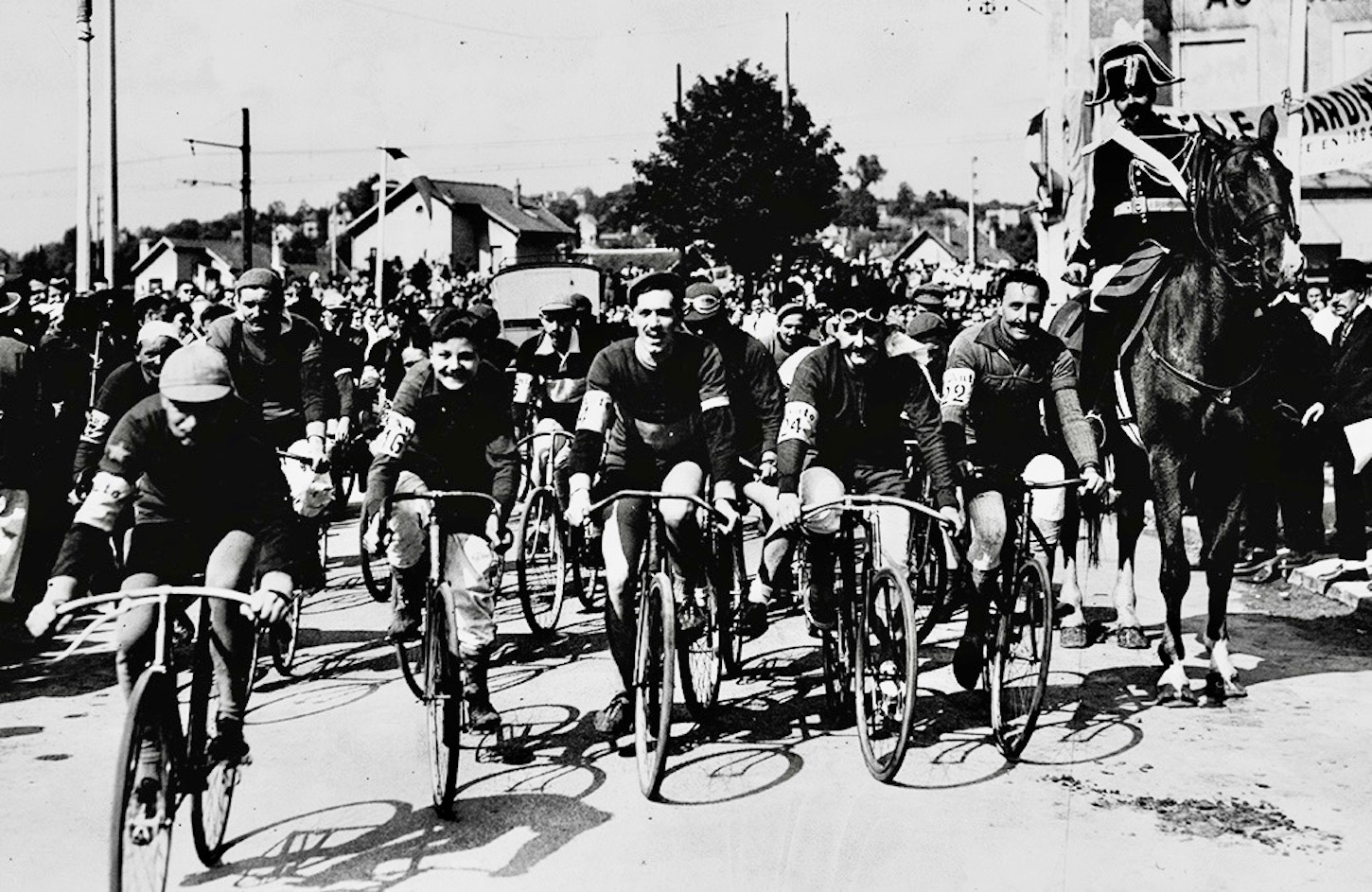 Touriste Routiers – In an Age of Color (Part One)

“The ideal Tour would be a Tour in which only one rider survives the ordeal.” Henri Desgrange (father of the Tour de France)

When we look at photographs of the early days of cycling the world looks like a dull place. Black and white prints mask an extremely colorful era not only in our sport but of a time when the world was emerging into the industrial age.

The world at that time was indeed a colorful place and it was populated by colorful and often eccentric people, who pushed the boundaries of human possibilities. The bicycle held a special place in this progression because before bicycle transportation was either by horse or by foot. The bicycle enabled its user to travel faster and further than was possible previously. The concepts of bicycle touring and racing captured the imagination of a largely static population. France and England were the two primary incubators of the fledgling sport.

In France the early innovators focused on touring as a means to demonstrate the possibilities of bicycle transportation. Meanwhile in England the concept of establishing speed records between two places took firm root. It was this difference that that gave English riders the edge in the first major cycle races. In 1891 George Pilkington Mills won what is generally considered to be the first ever road race using the new fangled ‘safety cycle’. The race was Bordeaux-Paris, which was a derny paced race covering 560km (350mls). This race survived as a paced event until 1988 but due to its extreme length and specialization lost favor with the professional peloton.

Originally Bordeaux-Paris was created as a ‘warm-up race’ for an even more demanding challenge, the 1200km Paris-Brest-Paris. This monster was first run in 1891 and the winner, Charles Terront, arrived back in Paris after 71 hours and 16 minutes of no sleep. Run every ten years, the P-B-P continues into modern times. However its attraction to serious racers petered out in 1931 when the professionals of the day stated “we have better things to do than take part in a speeded up version of a tourist event”.

Those early long distance marathons had much to do with the evolution of racing as we know it today. The second P-B-P was organized in 1901 by the newspaper L’Auto-Velo with Henri Desgrange at the helm. His formula for the race was international (open to foreign entrants) with two distinct groups: coureurs de vitesse (racers) and touriste routiers (non-racers). Interestingly it was Maurice Garin (“the chimney sweep”) who won the 1901 P-B-P by almost two hours. Two years later he would win the inaugural Tour de France in 1903.

When Geo Lefevre suggested the idea of creating a tour of France (Le Grand Boucle) to Desgrange his marketing mind immediately grasped the commercial value to such an undertaking. At the time it did not seem important to anyone that by stringing a series of cycling marathons together would severely tax the athletes. So the Tour was born and stages of 450kms or more were not uncommon. With the sport still in its infancy professional racers were still few in number so to bolster the field size Desgrange allowed touriste routiers participate in Le Tour.

Desgrange was almost a despot with his Draconian rules to ensure that the athletes receive no help whatsoever during the race. Probably the most famous incident depicting this ideal was that of Eugene Christophe who, when leading the race up the Col du Tourmalet in 1913 had the misfortune to have his front forks break. His only solution was to run back down the mountain and seek out a blacksmith shop to initiate a repair. Having run 14kms he came across a small forge and set to work. Apparently the blacksmiths son pumped the bellows and this was spotted by a race commissar. Christophe finished the repairs and got back on the road mainly out of the interests of his team. After the stage was over, and Christophe had lost his lead and many hours, Desgrange imposed a further time deduction for the help that he received at the forge!

Christophe was a professional racer. He earned his living from the bike and in our modern way of thinking his team would help him every way they could. Getting in-race assistance went against Desgrange’s idealistic concept of sport. So it is a great irony that his treatment of the touriste routier was even harsher. ‘Racers’ they were, but being un-sponsored they were individuals who had to fend for themselves. “There are special prizes for you and you are welcome to come and get them if you have the courage. But apart from being in the race on the road, I do not want to know that you exist.” That was Desgrange’s blunt stand.

If the old time professionals could get no assistance from their team while actually racing, they did have the logistics of hotels, food and post-race bike repairs cared for by the team management. The touriste routiers had no such comfort. After the excessively long stages of the era they would have to find their baggage from the designated van. Then they would ride around town with their bags balanced on their handle bars looking first for the local school to get showers and then after that try and find a small inexpensive hotel.

Some of the experienced touriste routiers booked their rooms ahead of the race but most took it day by day. Working to a shoe-string budget it was mostly a question of survival and the deployment of initiative. Some colorful characters had to resort to making money from the crowds at the race finish before settling down for the night. One such rider from the north of France, Deloffre, was as poor as a church mouse. So being a competent acrobat he would finish the stage, prop his bike against the wall, and then do tumbling tricks. Onlookers would toss coins in his racing hat and that would support his food and lodging for the night.

Next: Touriste Routiers –In an Age of Color (Part Two)