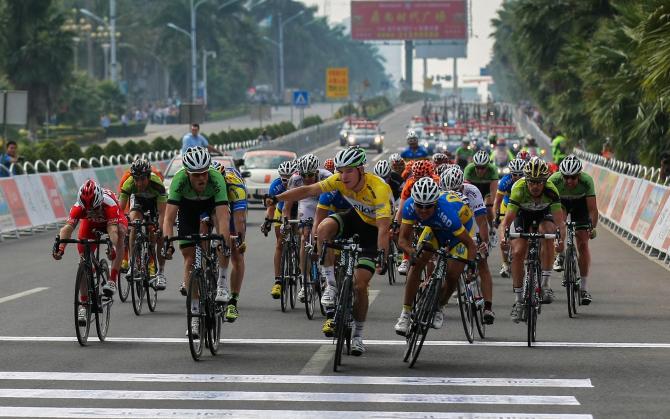 Today’s stage proved to be the the most challenging so far. In an attempt to keep their KoM leader Mateusz Taciak in contention, Team CCC set the pace so high – that several riders ultimately lost contact with the main field. One of them was Theo Bos – who was dropped for the third day in a row.

However, at the end of the climbs, Belkin still had 5 riders in the group. And, by the time they reached  the 3,4 kilometer finishing straight, with the help of his teammate Lars Boom, Hofland successfully edged out Vitaly Buts in a sprint finish.

With today’s victory, Hofland extended his lead over Frederic Amorison (Crelan) to 1.07 – with just one mostly flat stage remaining. As a big bunch sprint is expected to end the race, it is hard to imagine Hofland being denied his first professional win in a stage race.

Today’s 172,4 kilometer stage from Dongfang to Danzhou was the final stage that included  categorized climbs. After some initial attacks, three riders managed to separate themselves from the peloton as Gregoire Tarride (La Pomme Marseille), Oleksandr Polivoda (Atlas Personal) and Andriy Vasylyuk (Ukraine) rode clear. Back in the main field, Belkin continued to control the peloton while the escapees gathered up bonus seconds at the first two intermediate sprints.

Tarride was caught before he reached the top – with Taciak taking 3rd ahead of David Belda (Burgos) and his teammate Nikolay Mihaylov. The Polish team kept the pace high in between the climbs and so the group with Bos never managed to rejoin the peloton.

Former KOM leader Buts took 3rd on the second climb ahead of Adrian Honkisz (CCC) and repeated the feat on the final climb while Taciak was fourth. Therefore, provided the Polish rider finishes tomorrow’s race, he will secure the mountains classification.

Belkin had five riders in the front group and helped keep the pace high on the run-in to the finish. Polivoda and Vasylyuk were caught and so the stage was set to be decided in another sprint. Once again, Belkin proved their superiority with Boom leading Hofland out – who narrowly edged out Buts.