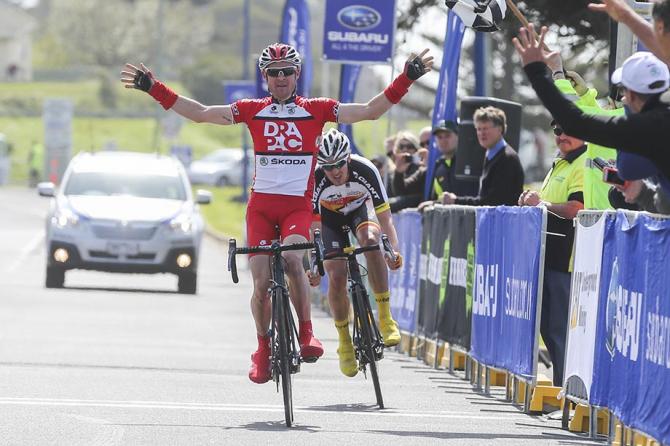 Even a puncture couldn’t prevent Jack Haig (Huon-Genesys) from retaining his grip on the 2013 Tour of Tasmania yellow jersey, as local Bernard Sulzberger (Drapac) took out stage six in Penguin.

However it was Haig who stole the show, recovering from a puncture to finish fourth and ensure he maintained a 1:43 general classification advantage over Hucker.

“At about 500 meters down the descent to Gunns Plains I got a front wheel puncture,” the Bendigo-based rider explained. “I quickly took out my wheel and changed it and then I waited up for the main peloton to catch me before riding with them into the valley.”

Haig was quick to thank the work of his team mates who sacrificed their general classification ambitions to assist the yellow jersey rider in catching the breakaway, which included main GC rivals Hucker and Darren Lapthorne (Drapac).

With two stages remaining in the Tour, the Huon-Genesys rider knows that overall victory is not yet assured.

“Drapac are really giving it all to us. They’re really strong guys and I’ve got a lot of respect for them, as I train a lot with them in Bendigo,” Haig commented. “They’re going to try everything to get the yellow jersey.”

After taking a substantial time gap at the top of the second King of the Mountain, a five-man breakaway of Hucker, Lapthorne, Haig, Gillett and Sulzberger splintered during the final 20 kilometres to Penguin.

Sulzberger and Gillett shook the Bendigo trio with five kilometers remaining, leaving the chasing three to fight it out for the remaining spot on the podium.

In claiming the sprint victory, Sulzberger followed in the footsteps of his sister Grace, who won a similar stage in the 2013 Mersey Valley Tour, part of the women’s Subaru NRS.

"Grace won this stage recently, so it’s good to keep the family tradition and back it up with another win,” Sulzberger said.

"It was looking really good for the general classification when Robbie and Darren were up the road. I managed to stay with Jack on the climb and just get across to them and get away pretty quickly at the end to finish it off, which was good.”

Despite the best efforts of Drapac, they were unable to substantially narrow the lead of Haig.

“Jack’s obviously going very strong at the moment, Robbie and Darren attacked to try and narrow the lead, but he was just too strong,” Sulzberger explained. “The aim was to get away and isolate Haig, which we did.

“Haig was the only Genesys rider in that breakaway , but in the end a few guys got back like Pat Shaw and Cooper and they did a lot of work to bring it together.”

The penultimate stage of the Caterpillar Tour of Tasmania will start at 10.30am on Saturday in Burnie and head inland for two difficult King of the Mountain climbs, before returning to the seaside town.