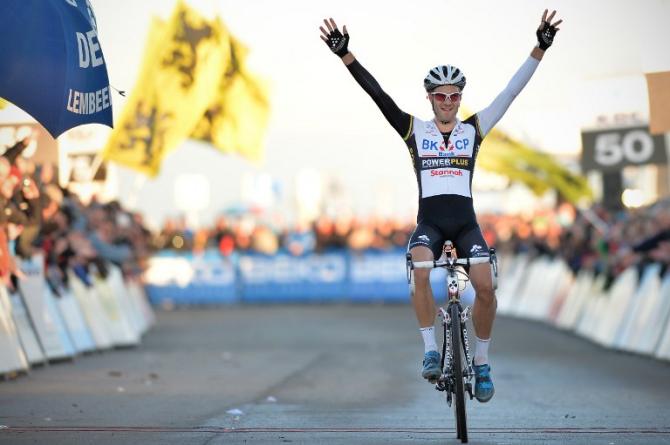 The Belgian rider repeated his performance from 2012, wherein he decimated the field and rode to a solo victory.

"It wasn’t planned," said Albert of his finishing style. "That’s when you get the best moments. I didn’t study the footage before the race, but what Herygers did back then made for memorable images. Koksijde is a little bit from me but also a little bit from Paul. The finish line was a bit shorter than in 1949 ; that’s why I didn’t have a lot of time. This remains my world championship race," Albert said.

Mid-race saw Belgian champion Klaas Vantornout go over the handlebars while trying to navigate the "Herygers-dune" section of the course. This was followed by a split it the lead group, where Tom Meeusen took the lead from Albert.

However, his lead was only momentary, before Albert put he hammer down.

"Before the race, I was a bit nervous, but as soon as I got going, nothing was going to bring me down," Albert said.

With Meeusen out of the way, Albert’s  teammate Walsleben put himself in front of the main chase group, helping Albert to quickly build up a comfortable lead.

"I tried to lower the pace. On the other hand, it was not possible for me to get back to him," Walsleben said.

While Albert led the race, Nys struggled at the back of the chase group. And, at one point he rode into other riders and subsequently got stuck in the barriers – with Meeusen riding into him. Nys showed his annoyance, but still managed to recovered and regain some ground in the closing laps. Nys bridged up to the first chase group with Walsleben and Mourey, bringing along Pauwels. In the sprint, Nys came just short of finishing on the podium.

Mourey showed his strength in the final dash.

"Before the race, I wanted to get on the podium. When Niels took off, I eyed second or third place. I kept an eye on Nys in the final lap because he’s fast. Second place is great," Mourey said.

US champion Katie Compton won the elite women’s event –  riding away from her rivals half-way through the race. Today’s victory marked Compton’s second World Cup win of the season – extending her  lead in the overall standings by thirty points over Nikki Harris.

Compton commented that she didn’t arrive at today’s race with the perfect mindset however.

“I did. I got a gap and tried to maintain my rhythm. The gap kept growing, In the US, Katerina Nash is giving me a hard time. She’s making me work for it. Too bad she and Marianne Vos are not here. I like to chase,” Compton smiled. It was a strange sensation to take such an easy win considering that she didn’t feel comfortable on the bike. “It was running more than riding; it was heavy sand. I was lacking power. I felt clumsy out there. I was tired,” a jet-lagged Compton said.

Today’s race got underway with Dutch rider Sabine Stultiens – who immediately took the lead  and established a gap over European champion Helen Wyman.

“I always have a good start but she went really hard. I wanted to go fast but not that fast,” Wyman said.

Meanwhile, Compton found herself back in eighth place. And, at one point, the American accidentally rode into Nikki Harris while trying to pass her on a technical drop.

“I rode into her but didn’t intend to do that,” Compton admitted.

Later on, Compton overtook Wyman too, while Stultiens faded back.

Shortly thereafter, Compton, Wyman and Harris were leading the race. But, after the "Herygers-dune" – Wyman was no longer able to stay onboard.

Both British women failed to come back while Compton continued to extend her gap along the sand sections.

From there, Compton kept increasing her lead – building up a substantial one-minute advantage. Behind her, Sanne Cant , Stultiens and Sophie de Boer joined the chase group. Halfway through the second lap, Cant accelerated. Wyman subsequently fell back, while Harris was unable to make up lost ground as well.

The small gap between Cant and Harris remained in effect  for the remainder of the race.

“I was hoping she made a mistake but that didn’t happen. It’s not bad because now I’ve been on the podium in every World Cup round,” Harris said.

For her part, Cant wasn’t too worried about a comeback from Harris.

“I had things under control. In the sand I tried to gain some seconds. Too bad I didn’t win but someone was clearly stronger today. I should be pleased because it’s my best-ever World Cup result,” Cant said.

The next World Cup round is held in Namur, Belgium on December 22 with Compton defending her comfortable lead.

“I’ll try to hold it. I don’t want to deal with jet-lag again so we’re staying here. I’ll do the Scheldecross, Overijse, Mallorca, then the World Cup rounds and the Christmas races,” Compton said.

World Cup Standings after Round 3: