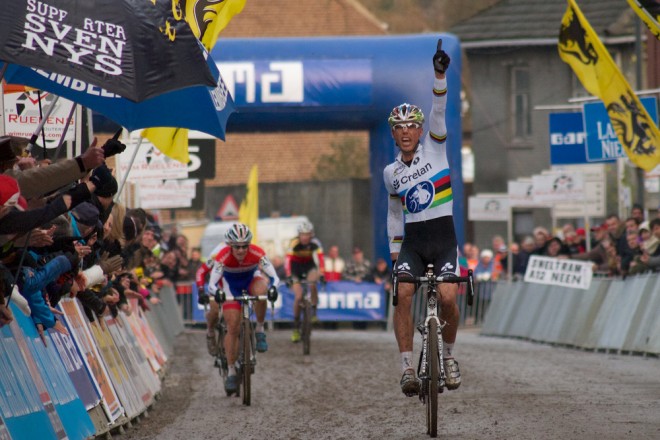 Sven Nys put his stamp of authority on today’s 2013 Vlaamse Druivencross at Overijse – marking his fourth consecutive victory at the race.

“Yesterday (at the Scheldecross in Antwerp) I made some mistakes in half the race, and it cost me a podium place, I think, because I felt myself also strong over there,” said Nys. “But today, it’s an amazing race, good atmosphere, it’s a hard race, and to win with four guys in the last lap, to do an explosion like this, is great.”

Nys, van der Haar and Vantornout all took turns pushing the pace, trying to shed the others, while Pauwels stayed at the back.

On the final lap, Vantornout initiated an attack – with Nys staying right on his wheel. In the meantime, Pauwels could not counter the acceleration, and consequently got dropped.

In turn, Nys countered Vantornout’s attack with a surge of his own – with only van der Haar able to chase.

“I felt half the race that I was the strongest, but it was not possible to make a gap. And you need to do a good tactic maneuver in the last lap,” said Nys. “I saw Lars was coming and then he was past me, and for me it was a perfect moment. It’s better to have him before me, so I can do something he doesn’t expect, otherwise he’s in the back and he’ll do something with me.”

Nys managed to hold his his edge to the line, followed by van der Haar in second and Pauwels third in, while  Vantornout coasted in at fourth.

“The only guy I was afraid of was Lars, because he’s technically really good, and he’s also explosive in the sprint,” said Nys. “So to pass him and do the technical downhill in the last part of the race, that was the move of the day to win the race.”

Van der Haar said he took a while to find his rhythm on the tough circuit.

“I didn’t have a great start, and straight away I noticed my legs weren’t what they have to be to be fresh and explosive. But I saw that Sven didn’t have a great start either and I was on his wheel, so I thought, ‘Okay, let’s just see how this goes,’ and after half a lap I saw he was really good, so I tried to stay in his wheel and see if I can come into the race,” he said.

“After half an hour I felt better and better and got into first position and then you start to feel positive, you feel better, and the legs came also.”

A stumble by Vantornout just before the finish forced van der Haar to hit the binders, and that was that.

“Klaas made a mistake and I had to brake and then Sven was gone,” said van der Haar, who nevertheless was content with his runner-up finish.

“Normally after a training week I’m not so good, so this was really good for me,” he said.

In the women’s race, Katie Compton won for the second consecutive time this weekend.  In addition, Sanne Cant and Nikki Harris also repeated their podium finishes from yesterday as well.

Cant attacked on the last lap, sprinting up the hill, but Compton was able to match her acceleration.

“I know that climb kind of wears on you, so if you go too hard too soon, it’s a long lap,” said Compton. “So I had to wait and recovered on the descent and then caught her towards the end and just kind of waited. And then I got out of the last corner quicker. The sprint was out of the last muddy turn, so I accelerated and sprinted out of that turn and then just held it to the line.

“Sanne is strong. Technically she was riding well and on the climbs, she was attacking on the climbs, so I definitely had to choose my time to attack, especially at the end. It was good, it was a good race.”