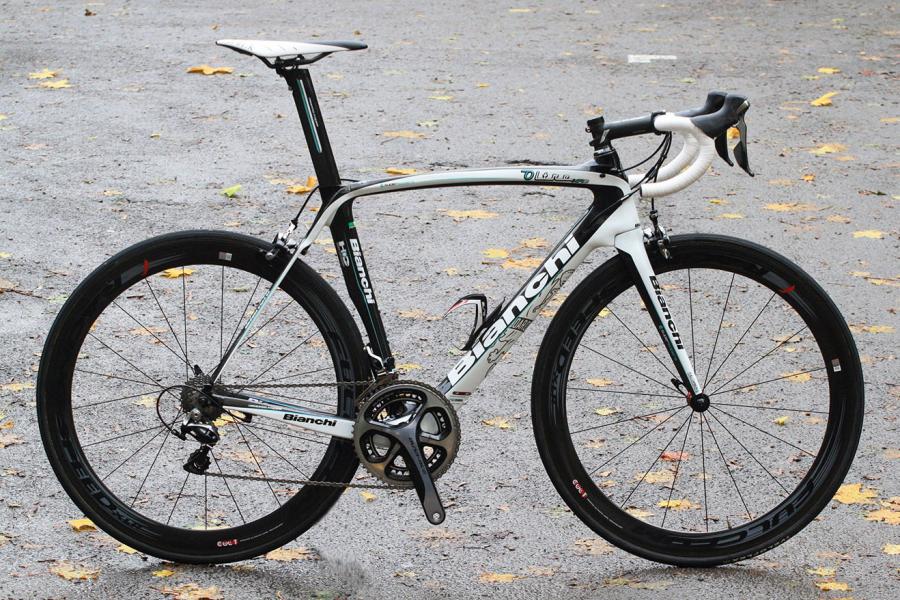 In keeping with the current trend of  frame designs, the XR2 features a tapered head tube with a 1 1/8in bearing on top – extending out to a 1 1/2 inch bearing at the bottom.

The new fork is an integrated design – with a "notch" taken out of the head tube/down tube junction to accommodate the fork crown. This according to Bianchi, slightly improves the airflow and reduces drag.

Given the current trend of "aero" road bikes, not surprisingly, the Oltre’s seat tube has a unique cutaway around the leading edge of the rear wheel, as well as a seat post that is aerodynamically shaped too. Indeed, Bianchi says that the XR2 was designed specifically with aerodynamics in mind.

Bianchi decided to go big with the bottom bracket ! This in turn allowed them to use a large diameter down tube and wider chainstays for increased stiffness. In addition, they chose to go with a BB386 EVO design as the standard. This allows the use of a wide range of crankset options.

The carbon orientation of the X2 utilizes a technology Bianchi calls X-Tex. Essentially, extra carbon strips  are moulded into the frame’s head tube and bottom bracket area in a grid-like structure. Bianchi says, this provides extra rigidity in key areas without adding the weight.

In contrast to the oversized tubes of the front triangle, the seatstays are flatt and ultra thin – which is why Bianchi call this their ultra thin seat stay (UTSS) design. The object is to dial in some compliance with regard to vertical and lateral flex in the bike’s rear end.

The Oltre XR2 is offered in a few different "builds" – ranging from Shimano, Campagnolo and SRAM. However, the wheels will be strictly Fulcrum Racing Zero Darks.

In addition, not only is the Oltre XR2 compatible with both electronic and mechanical groupsets, it will be available in a couple of disc versions. The only difference with the disc version, it will have a different carbon lay-up in the chainstays in order to handle the increased pressure under braking that discs create.