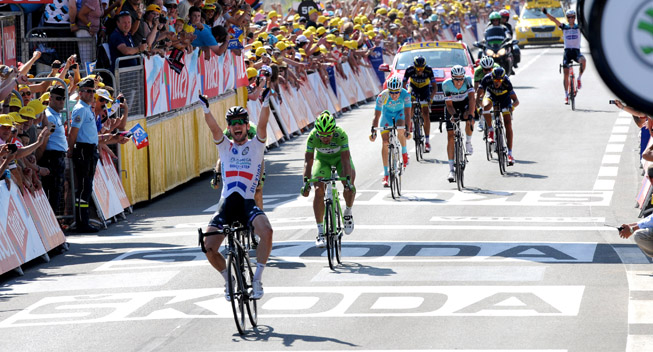 “The team did a great job in bringing me into position,” Kittel said at the finish.

“We did a lot of work and then in the last 500 meters I had do work for myself and then I started my sprint with 200 meters to go. I’m very proud of how we worked for the win today. There was a lot of wind and I hope it’s better in the next few days.”

In fact, at the end of today’s stage, Mark Cavendish was seen leaving the race frustrated – as he found himself boxed in during the final few hundred meters.

However, with 28 kilometers remaining, with the brunt of the work being done by the BMC team, the peloton managed to reel in the breakaway group in – reducing their lead to just over a minute.

With less than 15 kilometers to go, the last escapee, Mancebo, was caught. And, from there, BMC, Movistar, Garmin-Sharp, Lampre, Giant-Shimano and Omega Pharma began ushering their sprinters to the front.

With 7 kilometers to go, after exiting a tunnel into the streets of Palm Jumeirah, Omega Pharma’s Alessandro Petacchi and Mark Renshaw initiated a surge in an attempt to set up their teammate Cavendish for the sprint.

With 3 kilometers to go, Omega Pharma still held on to it’s control. However, in the final 1000 meters, Kittel began making his way up to the front as well.

Unfortunately, despite having Petacchi and Renshaw at his side, Cavendish somehow became swarmed by the pack – ultimately boxing him out of the sprint.

Meanwhile, Kittel continued powering his way along the front at a speed that proved to be too much for Sagan and Phinney to match.

“I think the team rode really well in the finale and we can be really proud of this result. This is the first race or first lead out for lots of teams. Everyone has to train and find each other. It’s not easy but it will come,” Kittel added.

“I have some good local support here, who showed me around and I think it was an advantage today.”

“In the last 500 meters I was on my own but it wasn’t a problem because my team left me in a good position. I had good legs and I could wait and wait on Phinney’s wheel and then went with 200 meters to go. Now I’m looking forward to the next two stages.