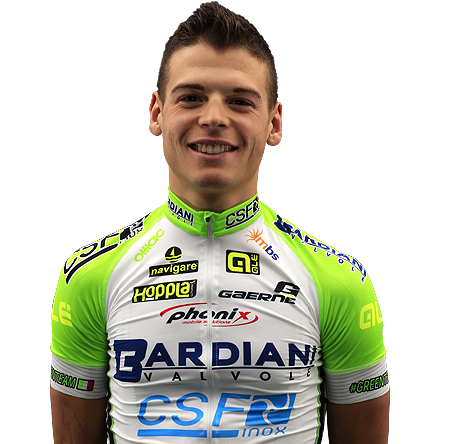 Edoardo Zardini won stage 2 of the 2014 Giro del Trentino in San Giacomo di Brentonico today, following a solo attack on the final climb of the day. Meanwhile, PrzemysÅ‚aw Niemiec won the sprint for second, with Fabio Duarte finishing in third spot to round out the podium.

The final minutes of today’s stage, saw the Italian rider successfully ride clear of his three breakaway companions half-way up the final climb. However, Zardini’s attack didn’t come without it’s countermeasures from other riders, as Cadel Evans and a small group of race "favorites", pursued him in earnest. And, despite not be able to catch the Italian, the pursuit managed to stem Zardini’s advantage enough to deny him the pink leader’s jersey.

It wasn’t until 30 kilometers of racing, that a small breakaway group containing Leonardo Duque, Adrian Honkisz and Giorgio Checchinel finally managed to ride clear of the peloton.

From there, the trio succeeded in building up a substantial gap of almost 9 minutes over the field.

However, as the escapees approached the base of the final climb, their lead had been reduced to just 40 seconds. This in turn spawned a flurry of attacks from within ranks of the MTN-Qhubeka squad, with riders such as Jacques Janse van Rensburg, Daniel Teklehaimanot, and Sergio Pardilla attempting to bridge the gap to the lead trio. Unfortunately, this proved to be too high of a pace for race leader Oss to follow, who subsequently lost contact with the peloton.

Despite MTN’s best efforts, only van Rensburg’s second attack seemed to stick, as he took three other riders with him. However, the South African rider was later dropped by his fellow escapees, as they continued to stay out front of a rapidly diminishing peloton, and build up a slight lead.

With 4 kilometers remaining, Edoardo Zardini was the first in the group of escapees to launch an attack. At that point, both his breakaway companions and what remained of the peloton, ran out of road before they could reel the Italian rider back in.

Following today’s results, Cadel Evans has taken over the race lead, with a 9 second advantage over Zardini.