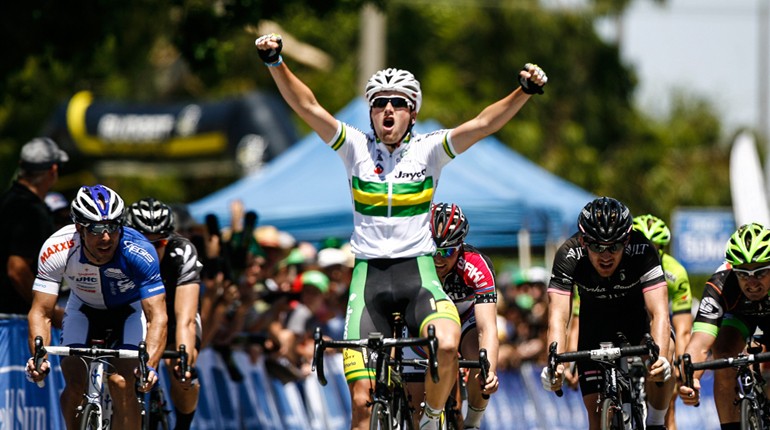 The 19-year-old sprinter, Robert-John McCarthy, upset a cast of high profile riders, to claim stage of the 2014  Jayco Herald Sun Tour in a sprint finale in Nagambie today.

Originally from Ireland, McCarthy has spent the last couple of seasons as a domestique riding in the shadow of Australian sprint sensation Caleb Ewan, won the most significant victory of his fledgling career.

Meanwhile in the general classification, Orica-GreenEDGE’s Simon Clarke preserved his advantage at the head of the bike race crossing eleventh on the stage to hold his eight second lead over former Olympic rower Cameron Wurf.

For Clarke’s teammate Matthew Goss it was a case of what could have been, as a slipped chain at 200 meters to go ended his chances of stage win.

McCarthy was initially forced to veer off the road to narrowly avoid a crash caused by a clash of wheels that toppled Garmin-Sharp sprint ace Steele Von Hoff and forced Pat Shaw to abandon 13 kilometers from the stage finish.

In a Tour that was intended as a learning experience for McCarthy, it was the U23 Team rider that handed his opponents a lesson on getting to the line.

“I knew I have the speed, for me the hard part was just getting to the line with those established lead out trains,” said McCarthy, who’s most significant victory prior to today was a junior national road race title in 2012 ahead of Ewan.

“It’s really hard when you’re not in one of those established teams to earn the respect of those guys, but I hope I have done that now.

“I had to fight really, really hard for position and I decided I was going to be the last guy of someone’s train.”

“I saw Jonathan Cantwell with about one kilometre and a half to go and I just jumped on his wheel and waited and waited, and then moved around maybe 250m to go and just went for it, and held on for the line.”

Being a relative unknown in the race, McCarthy’s reaction to upstaging some of world cycling’s elite in Nagambie was that of shock.

“I know I’m a good sprinter, but when you look at the field here it’s some of the best in the world,” McCarthy said.

“I just came here to try and learn from those guys and I just found myself in a good position.”

“I crossed the line and I couldn’t believe it. I’m a bit speechless to be honest.”

While McCarthy’s post race reaction was that of elation, it was a focussed Clarke that spoke after the stage about his Orica GreenEDGE’s team’s defence of his yellow jersey.

“The objective is to keep yellow by the end of tomorrow, so we rode with that tactic,” Clarke said.

“I hardly touched the pedals all day today, the boys did a great job.

“Mitch were really strong today and they had everything under control, so no stress for me whatsoever.”

In addition, Clarke said he’s wary of general classification challengers Wurf and Jack Haig, but would be more intent on riding his own race in Sunday’s final 124 kilomeer stage.

“We’ll ride to our plan, I’ve got Gerro by my side who is a great climber, so I just need to stick close to him and we’ll work together and work on our team plan,” said Clarke.

“If people attack us, we can adjust that plan, but we’ll be on our own path.

Earlier in the race, seven riders proceeded to breakaway from  the peloton, as soon as the "flag was dropped". They were joined shortly after by Kristian Juel of Team Budget Forklifts team.

Four of the original escapees were eventually caught. However, the remaining four held together until they were  inside the final kilometers.

It was Orica-GreenEDGE, Garmin-Sharp and Cannondale Pro Cycling that did the bulk of the work to reduce the gap to a manageable margin after the climbs, before really tightening down on the breakaway 25 kilometers from the finish.

At the end of today’s race, Jack Haig retained his White Jersey, while Thomas Hamilton kept his King of the Mountain Jersey as well.

Claiming sprint points as part of the break, Jack Anderson claimed the Green Jersey from race leader Clarke, while Chris Jorywas awarded the Most Aggressive Jersey for his work in initiating the break.