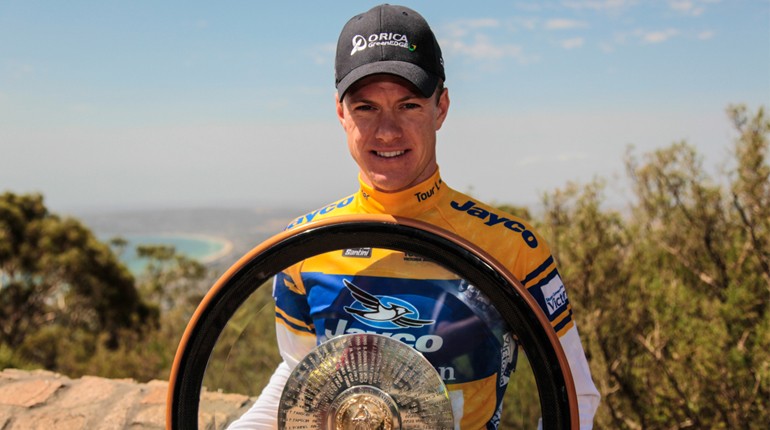 Simon Clarke was crowned 2014 Jayco Herald Sun Tour champion today. Clarke was awarded the victory as the leader going into the final stage after consultations between Victoria Police and race organizers concluded that today’s final stage at Arthurs Seat could not proceed due to extreme weather conditions.

While there was no immediate threat on Arthurs Seat, emergency services including police and fire brigade, had been diverted to other areas under threat across the state.

With results standing as at the conclusion of yesterday’s third stage, former Olympic rower Cameron Wurf and the up-and-coming Jack Haig  rounded out the podium.

It was a decision that Clarke and his Orica-GreenEDGE teammates respected and accepted.

“Obviously it’s unfortunate, I was keen to race, I think all the riders were, but obviously safety is a priority,” Clarke said.

“I think we all heard that there’s quite a high fire danger today and the important thing is everyone’s safety and the fact that there’s some fires in rural Victoria and services were required there they had to make the call.”

Despite not having the chance to cross the finish line in yellow, the reward of overall victory more than satisfied Clarke.

“I still get to stand on the podium, for us it is still a great win and we’re stoked to have been able to come away winning,” said Clarke.

“Gerro didn’t get the triple-crown, but GreenEDGE got the triple crown.”

“So we’re happy as a team, it’s been a great summer for us and we’ll go to Europe motivated to try and continue that run.

Moving into the overall race lead through victory in Friday’s second stage to Bendigo, Clarke said the form and strength of his teammates this past four days had him confident of retaining yellow on the Tour’s queen stage.

“Our plan was our team’s strength, we got six really strong guys here, and we just had to stick together and work well together and make sure that we come into that last time with myself, Gerro and Cam (Meyer) there by my side to provide support for me.

“That was the plan, who knows what could have happened.”

A King of the Mountain jersey winner at the 2012 Vuelta a España, and seventh in last year’s world championship road race, Clarke was buoyed by his success and ability to grab his chances as Orica-GreenEDGE’s go to man on the road.

“I’ve spent a lot of time supporting Gerro and the important thing for me is when I do get the opportunity to have a bit of free reign and go for myself, I make the most of that,” Clarke said.

“I got that opportunity at the world championships last year and made the most of it, and at the Tour Down Under I was pretty much devoted to Gerro but I got told that here I would have a bit of free reign to try and make the race myself.”

In the immediate afterglow of the final presentations Clarke had a moment to reflect on adding his name to the esteemed honour roll of Australia’s most prestigious stage race.

“That’s probably the most honourable part of winning this race is looking back through at who’s won it and being on this list. That’s something I’ll be very proud of.”

With little time to bask in his success, Clarke boards a flight tomorrow morning for Europe where his first major racing appointment is Paris – Nice in March, before turning his attention to the Ardennes classics.

Race director John Trevorrow said the cancellation was the right decision on what is a tough day for emergency services across the state.

“Simon is a deserving victor of the 2014 Jayco Herald Sun Tour and will sit comfortably amongst an honour roll that features so many of Australia’s great bike riders,” Trevorrow said.

“Whilst we are obviously disappointed that this great stage at Arthurs Seat could not go ahead, we understand the decision made by authorities.

“It is a pretty dark day out there and the safety of the public state wide and our own riders and spectators is by far the priority.

“We had a number of event staff who have left the race to go home having received news that their houses are under threat, so there is a much bigger picture involved here.”

Continuing his impressive start to 2014, 20-year-old Jack Haig claimed the State Government of Victoria White Jersey as the Tour’s best under 23 rider, adding the honour to the best young rider jersey he won at last month’s Tour Down Under.