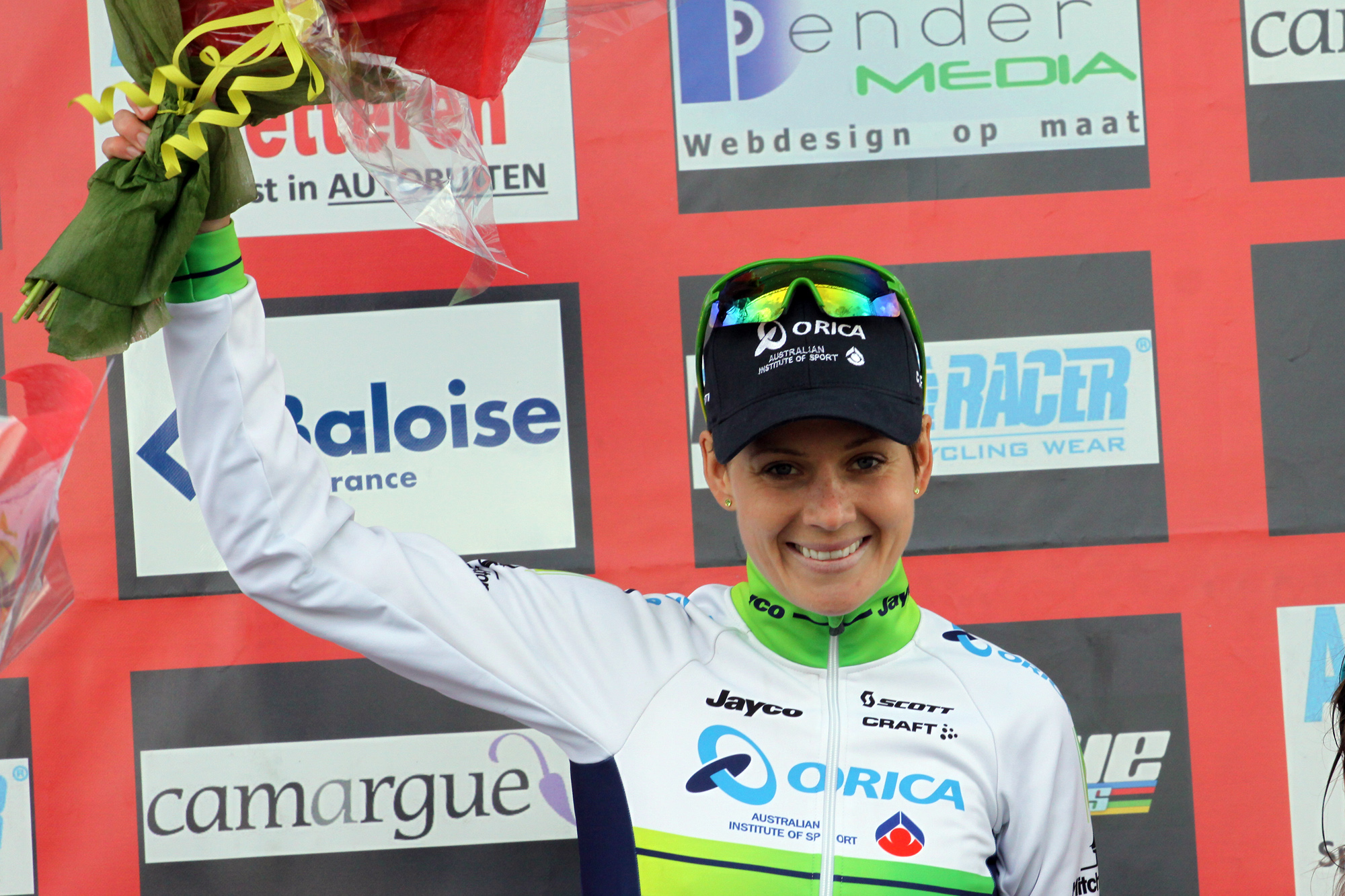 Emma Johansson sprinted to victory in the Le Samyn des dames today, scoring her first win of the 2014 season. A concerted team effort delivered the Swedish rider across the line ahead of Ashleigh Moolman (Hitec Products) and Sofie de Vuyst (Futurumshop.no-Zannata). It is the first international victory of the year for ORICA-AIS and the first European win of the season for the GreenEDGE family.

“It means a lot to the team to win races this way,” said Johansson. “There was a big difference between today and the way we raced last weekend, and it shows that when we race as a team, we can win. Just coming into today, everybody was more prepared and focused. I think that was really important for us.”

Vera Koedooder (Bigla) animated the race early on with a solo attack on the opening lap of today’s race. The lone leader entered the finishing circuit for the first of four times around the 21 kilometer loop with a slim advantage over the field. By the time the peloton reached the first GPM atop the cobbled Côte de Montignies sur Roc, Koedooder was back in the lead group.

“We were a little disappointed with our performance on Saturday,” admitted  Sport Director Gene Bates. “It was good to get second at Het Nieuwsblad but the team didn’t work together as well as it could have. We had an extra emphasis on teamwork today.”

“We know Emma is on good form,” Bates noted. “She wanted to go for the win, so the plan was to set her up today – either in a breakaway or in a kick. The uphill finish suited her.”

“The main tactic was to try to get a group up the road,” said Johansson. “I was saving myself for the last lap. The finish suited me, but I wasn’t completely confident. It’s always a risk coming in with a big group.”

The action heated up on the finishing circuit, with Trixi Worrack (Specialized-lululemon) initiating and attack, and subsequently opening up a slight gap, before her teammate Elise Delzenne and Hitec Product’s Ashleigh Moolman joined in the escape. However, the trio’s move was short-lived, as the peloton reeled them in with three laps remaining.

“When we go to the circuit, we wanted to make the race really hard,” said Bates. “Jessie were tasked with helping Emma in the final.”

The attacks, counter-attacks, splits and chases continued throughout the final three laps. Solo moves, small groups and a larger group eight riders all managed to slip the stronghold of the bunch only to be reeled back in prior to gaining any sort of true advantage. Always attentive at the head of affairs, Johansson swept up enough points to win the GPM classification en route to the race win.

“The GPM was right at the top of the cobbled section,” explained Bates. “Emma was always in a good position over the cobbles. I don’t know that the classification was something she specifically chased. I suspect it was more of a natural consequence of her good positioning.”

Delzenne launched a bold move in the last lap. Initially, the French National Champion was able to steadily build up her advantage, but inside the final ten kilometers the gap rapidly began to diminish.

“It’s ten kilometers to the finish from the top of the cobbled hill,” explained Johansson. “There were a lot of attacks after that hill on the last lap, but I felt like we had it completely under control. I still wasn’t completely confident that I could win or exactly how I would do it in the end.”

Gunnewijk had assumed responsibility of the chase ahead of the cobbled climb, and she resumed her position at the head of affairs after Johansson’s acceleration. Leading the bunch through the twists and turns, she pulled back Delzenne.

With five kilometers remaining, the peloton came back together. And, from there, a field sprint appeared imminent.

“Spratty attacked in the last two or three kilometers,” noted Johansson. “There were a few more attempts. I knew I needed to be near the front and ready to go with any attacks in the last kilometer.”

Moolman was the first to open her sprint. Johansson hopped on the South African’s wheel and enjoyed a draft until she was ready to unleash her final acceleration.

“We didn’t have any riders available for a proper train,” said Johansson. “Everyone had done so much work, so it was up to me find my own way. No team had a lead-out. Everyone was sort of on their own.”

“Ashleigh started the sprint really early,” Johansson added. “She gave me quite a good lead-out. I didn’t think too much. I just knew when it was the right time to go – and so I did.”

“It was great to see everyone work hard to contribute to Emma’s victory,” said Bates. “We pride ourselves on strong teamwork and coming up with the best result that all six riders can muster, and we certainly did that today. I’m really proud of the whole team.”