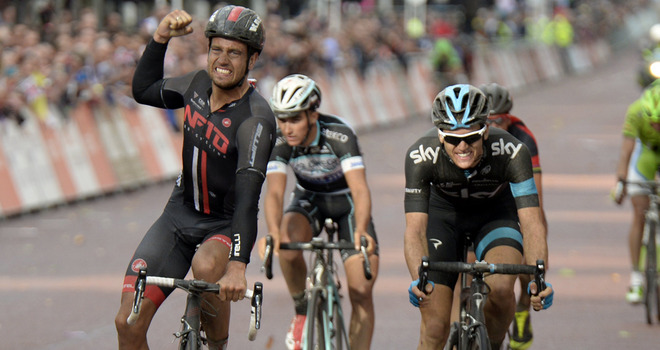 Adam Blythe claimed an impressive victory at the RideLondon – Surrey Classic with a well-timed sprint today.

The British rider made his way into an elite five-man group on the run back into the center of London – beating his WorldTour rivals.

After two years at BMC Racing, Blythe stepped down to third-tier UK domestic squad NFTO in 2014, and pulled off a huge victory in front of a packed crowd.

Fellow Brit Ben Swift finished a close second after his Team Sky team-mates had endeavoured to split the race apart in the Surrey lanes.

Both riders infiltrated the race’s winning move as an elite group of 11 riders headed into the closing stages. That pack was whittled down to five during a tense final run-in and it was Blythe who jumped early in the sprint and held on to the finish.

Swift looked to chase down his compatriot but had to settle for second place on the day, while Julian Alaphilippe (Omega Pharma – Quick-Step) rounded out the podium.

After a spate of attacks through Richmond Park six riders went clear as the race headed out of London and into the lanes. With Team Sky seemingly happy with the move the break saw its advantage extend as heavy rain and wind buffeted the peloton.

The increase in pace split the end for the original break with 76 kilometers to go, and Nathan Earle and Sir Bradley Wiggins were on hand to continue the momentum.

With the peloton stretched to breaking point, on the approach to Box Hill a dangerous move of 12 riders formed, including Blythe, Swift and former world champion Philippe Gilbert (BMC Racing).

Gilbert was full of enthusiasm and his attack through Wimbledon split the break, leaving just five riders who went on to contest a spectacular sprint finale around the iconic landmarks of London.

The route of the Prudential RideLondon-Surrey 100 offers a perfect traffic-free ride for a range of cycling abilities. Everyone can enjoy a challenging day in the saddle pedalling through the roads of London and Surrey. As well as the personal challenge of completing the route, participants’ involvement will also benefit good causes – the Prudential RideLondon-Surrey 100 aims to become the largest charity fundraising cycling event in the world.

Starting from Queen Elizabeth Olympic Park in east London, cyclists head past Canary Wharf and through the City of London before cycling west along Piccadilly and the A4 at Hammersmith. Riders first cross the River Thames at Chiswick and pass through Richmond Park and the heart of Kingston-upon-Thames, before crossing Hampton Court Bridge along the route made famous by both the road race and time-trial events during the London 2012 Olympic Games.

There’s plenty of stunning Surrey countryside on offer as cyclists head south past Newlands Corner, Abinger Hammer and Holmbury St Mary before tackling the biggest ascent on the route at Leith Hill. After a well-earned descent towards Dorking, it’s onto the next challenge: the world-famous zig-zags of Box Hill.

After heading north through Leatherhead, Oxshott and Esher the route takes riders back into London through Kingston and over Putney Bridge to cross the River Thames for a final time. The route then follows the Embankment all the way alongside the Thames, heading past some of London’s most famous landmarks as it makes its way across Parliament Square and up Whitehall.

The route then swings left at Trafalgar Square, with riders streaming under Admiralty Arch before a spectacular finish on The Mall.

Please note that the routes shown on the map are for information purposes only and should not be used as training routes. Please do not attempt to cycle the routes as shown on Google Maps as they include roads that will only be accessible on Sunday 10 August due to road closures and one-way systems. LSCP takes no responsibility for those using the routes outside of the event window.