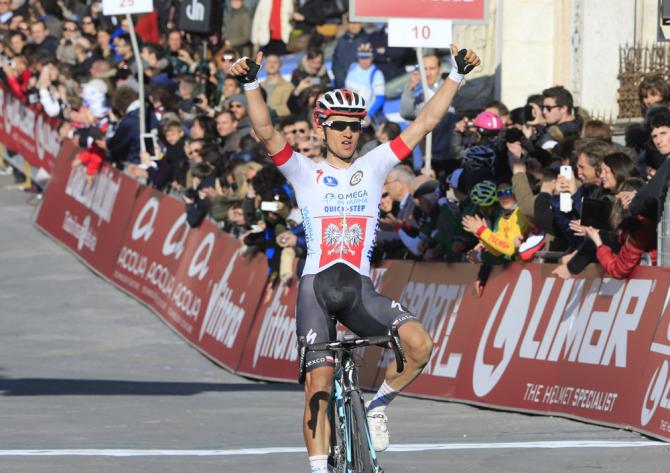 Michal Kwiatkowski won the 2014 Strada Bianche today, after distancing himself from fellow breakaway companion Peter Sagan with a fierce attack on the final climb – to  claim the greatest one-day race victory of his career.

"I didn’t expect to drop him," Kwiatkowski said after he crossed the line."

"I knew the final pretty well. As a team we were so good today, we had five riders in the front with 50km to go and we controlled the race. I can’t describe how I feel. Winning in Siena is an amazing feeling.

"I didn’t have any problems in the winter and was focused on my work. I started late compared to last year but I’m really happy with my condition."

Kwiatkowski and Sagan succeeded in riding clear of the peloton, after earlier escapees, Cadel Evans and Ian Stannard, were caught inside the final 30 kilometers.

Sagan was the first to attack, with Kwiatkowski being the only rider who was able to respond and bridge himself to the Slovakian rider.

From there, the duo succeeded in building up a minute advantage over the peloton, as they headed into the final three sections of gravel roads toward the finish in Siena.

A late chase group containing Alejandro Valverde, Fabian Cancellara, Damiano Cunego and Roman Kreuziger, tried to respond with no avail, as Sagan and Kwiatkowski continued to push their pace.

Upon approaching the final climb, Sagan continued to set the pace. However, as the gradient kicked up, Kwiatkowski subsequently initiated a furious attack, that left the Slovak rider struggling in his wake.