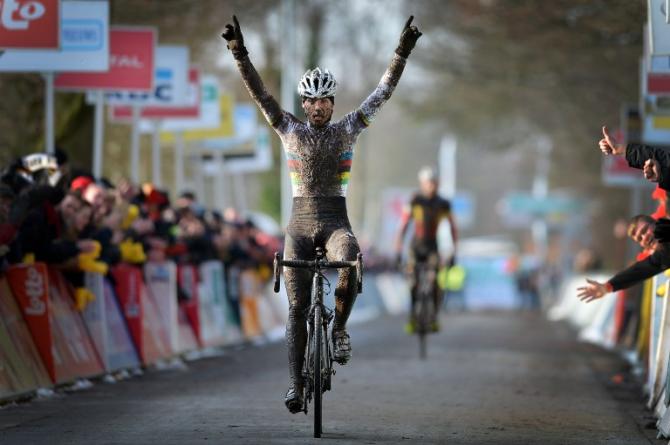 Sven Nys scored back-to-back victories this weekend – by winning the Superprestige round in Hoogstraten today.

Today’s race unfolded with a strong performance by Niels Albert, as the Belgian rider remained well out front until the remaining five laps.

It was then, that Nys rode clear from the chase group and successfully bridged himself to Albert. Meanwhile, Klaas Vantornout, Tom Meeusen and Jim Aernouts remained behind to battle it out for third place.

In the closing three laps, Albert briefly sparred with Nys on the tough, muddy circuit. But, shortly thereafter, the Belgian Champion began to ride away – creating a gap that would prove to be insurmountable for any rider to close.

In fact, Vantornout subsequently caught and dropped Albert in the closing lap to claim second place over the early race leader.

Nys crossed the finish line by more than half a minute over Vantornout, while Albert — who at one point got tangled up in some barrier tape, and was seen on the verge of throwing his bike away- barely managed to hang onto third place, as a charging Thijs van Amerongen was fast on his heels.

Albert began today’s race with a six-point lead over Nys in the Superprestige standings. But, after today’s results, Nys is only four points down on Albert – with just one race remaining in Middelkerke on February 15th.

Nikki Harris won the women’s event – ahead of Sanne Cant, who was followed by Jolien Verschueren and Ellen Van Loy.