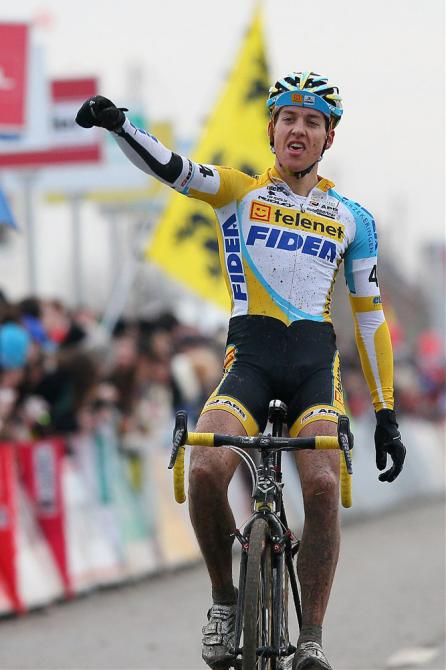 Tom Meeusen won the final round of the 2014 Superprestige cyclocross series in Middelkerke – soloing to victory by almost half a minute over his closest rivals – Kevin Pauwels and Sven Nys.

"I’m super happy," Meeusen said. "It’s the first time I won without having to sprint for it. Winning here was my only goal after a somewhat disappointing world championship race. It’s my fifth win of the season. I’ve won a race in every major classification. Now I can comfortably enter the off-season."

Despite being shadowed by Pauwels for the first three laps, Meeusen knew that he was the rider – best suited for today’s technical course.

"During the first laps I didn’t feel great but stayed in front. I didn’t want to ride away from Kevin but by hopping the barriers I created a gap of ten meters," Meeusen said.

Indeed, Pauwels realized that he probably lost today’s race as a result of it’s technical nature.

"We were equally strong but he made the difference on the barriers. They were quite high and it was muddy there too. Too bad I still haven’t won a race," Pauwels said.

Behind Meeusen and Pauwels it was Nys who managed the final podium spot. And, today’s third place finish proved to be enough for him to claim the overall win in the Superprestige series over Niels Albert – who only managed a 7th place finish today.

However, this came as a surprise to Nys who first thought that he had fallen just short of what he needed to win.

"I thought Niels was sixth. This is unbelievable. Equal points in the Superprestige series. It means Niels did a great season, too."

In actuality, all Albert needed to do, was keep two riders between him and Nys in order to maintain his four second lead in the series.

"I saw that Sven wasn’t having a great day so I knew it was possible for me," Albert said. "A unnecessary move from Corné van Kessel in the first lap blocked me. After that I tried to move up too quickly. In the end I just didn’t manage to move up. This race was like my whole season, close but not close enough."

How the Race Happened

Most of today’s race saw Meeusen and Pauwels out front, with Nys riding in fourth – quite a distance off from Lars van der Haar. Knowing that the overall win was within his reach if he could overtake the Dutch rider, Nys made it his mission.

"I had to get back to him. He made me work very hard for it. Even at the finish line he kept pushing me," Nys said.

In addition, although Nys and Albert were vying for the overall Superprestige title, another battle was taking place, wherein if Klaas Vantornout could manage to keep up with Nys and finish third – he could nix  Meeusen for third place overall. However, the Belgian rider’s efforts fell short, as he was only able to finish in fifth place in today’s race.

Further back, a bad start and a crash in the pit ruined Jonathan Page’s chances in today’s race.  In previous years the American rider managed some good results in Middelkerke. However, today he finished just outside the Superprestige points in sixteenth place.

Next week marks the last cyclocross race of the season with the final round of the Bpost Bank Trophy series in Oostmalle, Belgium on Sunday.

In the women’s race, Helen Wyman claimed her twelfth win of the season – with a solo victory in the eighth and final round of the Superprestige series.

"No win’s easy but it sure is nice to win at the end of the season," said Wyman. "It was very windy. There was so much wind that when running through the sand my bike was dragging. It’s a nice course but the wind made it much harder."

Today’s race unfolded with Wyman and Cant quickly powering away from the rest of the field. Shortly thereafter, Wyman managed to drop Cant.

"I gapped her after the second pit but she managed to come back. Then I sat on her wheel. It wasn’t up to me to set the pace. Then she slipped in some corners and I went harder," Wyman said.

From there, Wyman began increasing her lead over Cant. In fact, there was every indication that Cant was at her limit, because Wyman continued to increase her lead substantially over Cant – as she entered the second lap.

"I came to win but I’m running out of gas," said Cant. "The course isn’t the smoothest and the wind just made it too hard. There was not a single section to recover. The tailwind bits were too short.

During the two remaining laps Wyman further increased her lead up to more than half a minute on Cant. And, from there, the British rider never looked back.

"I didn’t expect it. After a not-so-good start I tried to move up," the 23-year-old Verschueren said.

Furthermore, Verschueren, who combines a full-time job as teacher with cyclocross racing, added:

"It’s sort of a hobby for me. I’m motivated to improve but not at all costs. Ever since Nommay I’m having good sensations on the bike. Sadly enough I wasn’t selected for the world championships but I’m trying to respond with the pedals."