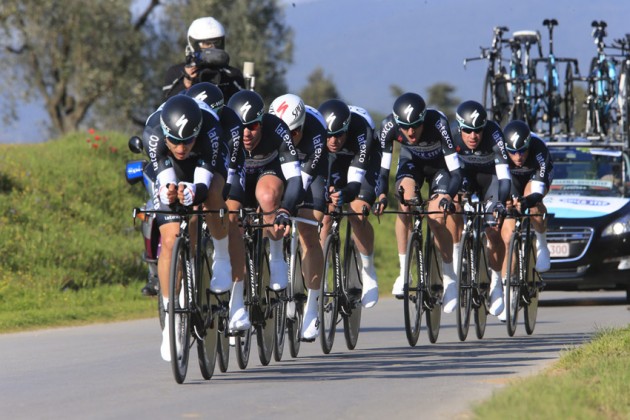 The Omega Pharma-Quickstep team won today’s opening team time trial in this year’s Tirreno – Adriatico, by beating the Orica-GreenEdge team by  11 seconds to claim the first victory in this year’s race.

Mark Cavendish led his team along the 18.5 kilometer course from Donoratico to San Vincenzo, to cross the finish line with a best time of  20:13.

"You have to get everything perfect to win a team time trial and so it’s always more rewarding when you pull it off and you get to stand on the podium together," Cavendish said.

Today’s victory marked the fifth time that Cavendish has led a major race after his team won an opening team time trial. For example, he donned the leader’s jersey in both the 2009 and 2011 Giro d’Italia, as well as the Vuelta a Espana in 2010.

In addition, to today’s win, Omega Pharma hopefuls Michal Kwiatkowski and Rigoberto Uran received a little bit of a buffer over other big GC contenders before the race heads into the mountains on stage 4.

"I’m thankful for my teammates, they gave their all," Kwiatkowski said after the finish. "I’m happy with the effort we did, it’s amazing.

"Before Tirreno, I said we cannot win the race here, but we can lose some seconds. We gained some seconds before the mountain stages, which is important for the GC. I’m really happy. We want to enjoy it."

Meanwhile, Movistar’s Nairo Quintana finished closest to Omega Pharma and Orica GreenEDGE, at only 18 seconds back, while Tinkoff-Saxo did well to limit Alberto Contador’s losses to just 24 seconds.

Even Ivan Basso and his Cannondale team put in a respectable performance – finishing 26 seconds behind Omega Pharma’s time, while Team Sky finished just slightly behind them – leaving Richie Porte only 27 seconds to make up.

However, given Lotto Belisol’s off the pace finish in just seventh place at 28 seconds back, André Greipel will have his work cut out for him – if he’s hoping to make up enough time over the next two stages to try and contest the blue leader’s jersey.

Unfortunately for Cadel Evans, his BMC team finished way back at 47 seconds off the pace, leaving the former Tirreno-Adriatico winner a lot of time to make up. Meanwhile, Chris Horner and his Lampre-Merida team fared even worse, at 53 seconds behind.